How Late Nights Are Killing You and Your Writing

Writers love the romance of an all-nighter. Oh, we’re so into our coffee and our quiet and our manic hammering away deep into the night.

Like most romantic things (showering together in a one-person tub shower, making out in a vehicle, dance in general), the all-nighter is a lot better in concept than it is in reality. It might be hurting you more than you think.

Let’s knock this out right away: Most folks will say some version of, “I only need about six hours to function.”

This is, scientifically speaking, complete bullshit.

There’s a statistically insignificant percentage of the population who won the genetic lottery, and these unicorns function perfectly on less than 8 hours of sleep. You are not one of these people. You’re more likely to be a pro basketball player, which you are not. You’re more likely to process Wendy’s into pure muscle, which you can’t. These people are rare enough that you've probably never met one.

So why does everyone think they’re good on six?

In simple terms, when you're tired, you don't know how much you suck. Because you're too tired to sense it. Think about the drunk guy who’s so drunk that he thinks he’s fine to drive. He just thinks he’s good to go because he’s so impaired that he can’t evaluate himself.

And, if you’re sleeping less than eight hours regularly, you’re in sleep debt, even if you slept in today, and that shit's harder to shake than student loan debt. So you've got not basis of comparison, no "rested self" to compare to. 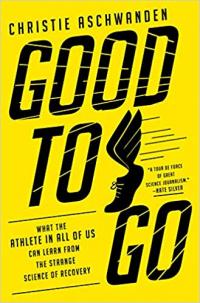 I read this whole damn book, Good to Go, about sports recovery. Drinks, foods, ice, all of it was explored. I’ll burst your bubble: There are two things that actually work: sleep and mental health. That’s it. All the ice, all the sports drinks and special diets, all the gizmos and rollers and massages in the world, all those big ass jars of stuff from GNC, all of it is studied over and over with almost no evidence that it works. I know you swear by your kale and your fish oil and your cryotherapy, and that’s cool. Keep doing what works for you.

Just know that sleep works. Whether we’re talking about brain function, memory, physical recovery, whatever, sleep contributes to everything good about your body and mind in ways that only sleep can.

Let’s look at this another way: A huge difference between a shitty athlete and an elite athlete is that the elite athlete is able to string together long periods of health, both in terms of avoiding injury and avoiding illness. This means they can put in a lot more effective training days than someone who’s fighting a cold on and off for a few weeks, then gets a nagging injury here and there. By competition time, the shitty athlete missed weeks of training that their opponent nailed.

Most of what you write at the end of your wick is pretty terrible. You’ll end up spending a lot of time revising that shit. Much like authors on drugs, authors on lack of sleep aren’t at their peak.

I Can Just Coffee Up

Sure, that works if you’re going to sweep the garage and you’re feeling pretty tired. But while caffeine will make you feel less tired and might improve your mood, it’s not going to improve those higher brain functions. You know, things like communication and putting words together. Writing, for short.

The caffeine in a couple cups of coffee helps you push the pen across the page, but it’s not going to replace sleep in terms of making those words worthwhile.

You can drink coffee to mask the misery of being tired. But coffee isn't a sleep substitute.

But I’m So Busy

I’m not here to make your life comfortable, I’m here to help you write.

I feel you. It’s hard to fit in eight hours.

We look at sleeping eight hours every night as a luxury as opposed to a NEED. And we have a cultural idea that sleep is for the weak. People wear their lack of sleep like a badge of honor, which is ridiculous. Not sleeping in order to get more done is like knocking out your teeth so you don’t have to waste time brushing.

You might work three jobs and just not be able to make eight hours. You might have kids. If you’ve got a kid with special needs, you’ve probably redefined “busy” a hundred times over. You might have a number of jobs that warrants you constantly telling people how many jobs you have.

I don’t mean to say you’re shitty if you don’t sleep. I mean to encourage people who can sleep to do so. I mean to encourage people who have the option to prioritize sleep to do so, to consider what's possible if they make sleep important. Sit down, look at your schedule, and see if there’s anything you can cut out for sleep. Based on most of ya’ll’s Twitter streams, the continued presence of Buzzfeed, and the fact that someone spoiled the new season of Better Caul Saul within 24 hours of it hitting the air, a good number of us have an hour a day to play with.

Exercises All Writers Need To Do

Excellent article. It always amazes me that when a writer is asked what the secret of their writing is, or to give their best writing advice, or where they get their ideas, not a single one ever says something like, "By getting a decent night's rest."

My primary strategy to do anything to the best of my ability, whether it's writing, going for a run, or painting an illustration, is to get some decent sleep before.

This is a prevailing issue in young people and I think this webapge should be recommended to all of them.This is not good to spend sleepless nights without any meaning.Your topic selection is really good and I want you to share more stuff online.Thank you so much for this.

The body should always be taken care of.

Constant processing and lack of sleep can negatively affect your health. That is why I can advise you to spend more time and attention on your health. I started doing this after I started having muscle aches. I realized that I needed the means to keep myself in shape and in good health, which is why I decided to use cbd for muscle recovery which I bought from Best CBD products UK supplier. So now I can be sure that I took care of my body.