"It's Not a Horror Movie, It's a Psychological Thriller!"

With the recent groundbreaking box office success of IT: Chapter One, it’s easy to believe the horror genre might finally start being accepted as a serious art-form. However, one look at social media—I’m looking at you, Twitter—and it’s safe to conclude the general consensus about IT: Chapter One is no different than any other popular scary movie: people do not want the horror genre to succeed, despite how much they might enjoy it.

Genre classification can be a heated topic for reasons that often baffle me, especially when it comes to horror. Gone are the simple, pleasant days of the all-encompassing HORROR section found in video stores. We now live in the age of the subgenre, which isn’t always a bad thing, not by any stretch, but like any system it’s abused just as often as it’s useful. Subgenres come in handy when you’re trying to narrow down a specific type of story. Let’s say you want to read a science fiction novel, but not just any science fiction novel. You want to read a time travel novel. Well, there’s a subgenre for that. Hell, let’s say your tastes are even more specific, and you want to read a time travel novel about cannibals. That’s okay, too, because there’s also a time-traveling cannibal science fiction genre.

If you ever want your blood to boil with rage, just type “not a horror movie” into Twitter’s search bar.

However, subgenres hurt their parent genres when an audience begins to view the subgenre as something separate. Take the coming-of-age tale, for instance. Is that its own genre? Some people might argue that it is, but those people would be wrong. Describing a work of art as “coming-of-age” is a good starting point, but it isn’t enough to prepare me for what to expect. Is it a coming-of-age story with horror elements? Fantasy? Science fiction? All three mashed together? If you think about genres and where they belong long enough, you’re liable to conjure up one helluva migraine.

It’s not the easiest thing to answer, I've come to find out.

Tell you what. For this exercise, let’s use our call-a-friend lifeline, and dial up our good pal Merriam-Webster:

I don’t think it’s that simple.

Raise your hand if you’ve ever heard someone say about a book or movie, “I liked it but it didn’t scare me.”

Keep on raising your hand. I can’t see you. This article has already been written.

My girlfriend’s daughter has been obsessed with horror movies for the last couple years, yet every time I play a new one for her—something I really enjoyed from my own childhood—she almost always complains that it didn’t scare her. I have to bite my tongue to resist screaming, “That doesn’t matter!” She isn’t the only one who has made similar comments in my presence. The complaint is probably most annoying when uttered from the mouth of a grown adult. They say it like the lack of real fear somehow diminishes the book or film’s quality.

So, the question is, if a story doesn’t literally scare its audience, does that mean it no longer falls under the category of horror?

Of course not. How fucking dumb would that be. Haha. Jesus Christ.

Yet we still have tweets like these popping up every day: 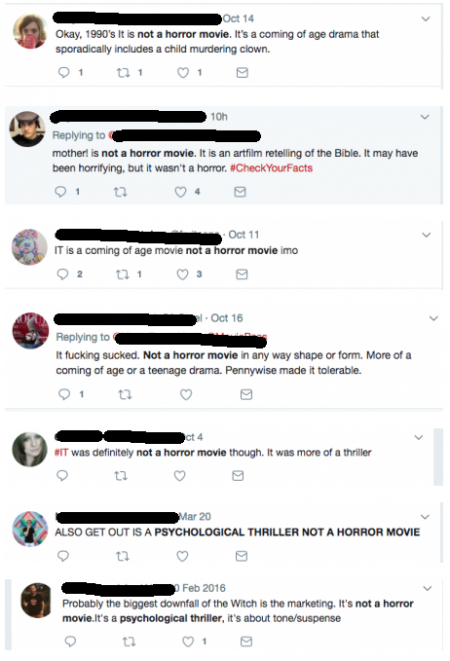 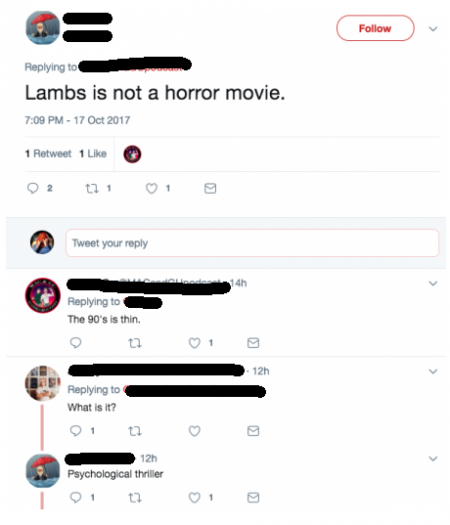 If you ever want your blood to boil with rage, just type “not a horror movie” into Twitter’s search bar. I do it whenever I'm feeling too optimistic about life and it works like a charm.

Every dumb asshole’s favorite comment about IT: Chapter One was “it’s not a horror film, it’s a psychological thriller.” Listen. Shut up. If you ever found yourself making a similar comment, just go right ahead and set your computer on fire because you’re officially banned from using a keyboard again. Idiots said the same thing about The Silence of the Lambs. Why? Because the horror genre is viewed as a lesser form of art. In 2017 it is still thought of as childish and lacking anything real to say.

When something in the horror genre comes along that everybody really enjoys, it’s too embarrassing to process, so they attempt to slap it with a more mature-sounding label like “psychological thriller” or “coming-of-age story” or, in the case of mother!, “a biblical retelling.” Just...shut up. Please. Horror stories often contain elements of suspense. What the fuck do you even think horror is?

It’s okay for something different to still be a horror movie. The only way our genre will grow and evolve is if we give it wings and let it fly. Expand your umbrella and allow in things besides “family moves into a haunted house” or “masked maniac slices up sexy teenagers.” Yes, IT is a horror movie (and it sure as fuck is a horror novel, too). Yes, The Silence of the Lambs is a horror movie. Hell, it’s probably one of the finest horror movies ever made. Take your “psychological thriller” hogwash and shove it up your ass.

Post-Mortem: How I Stopped Being (as) Afraid of Stephen King's It

Is the Supernatural My Security Blanket?

Wikipedia, the bearer of all truths, saysof The Silence of the Lambs:

It is also the first (and so far only) Best Picture winner widely considered to be a horror film,

I feel so sorry for people like you who think that the horror genre should not improved. It's no wonder people don't come at this article to agreed with you ^_^

I remember back when I owned about a million DVDs I was showing someone my collection. I had Alien filed with my horror films. They said, 'Actually, Alien is sci-fi."

Obviously, it is also a sci-fi film, spaceship and the future and shit, but a giant monster picking off characters one by one? Come on.

Anyway, the main point I agree with is how painful it is to see horror belittled and denied. Alien is horror, It: Chapter One is horror, The Invitation is horror and Class of Nuke 'em High is horror, Just like Star Wars is sci-fi, 2001: A Space Odessey is sci-fi, Her is sci-fi and The Ice Pirates is sci-fi. I could go on.  I'm sure you get the point

It's rough being a horror fan right now. Especially a literary horror fan. Let's hope the likes of A24 and Paperbacks From Hell help to bring back the Horror section. Enough 'Paranormal' in the book stores and 'Psychological Thriller' in the video stores. Let's embrace horror for the amazing and varied genre it is! Cheap thrills to deep thought, nothing kicks ass like Horror. One day I hope to walk into a book store again and see a proper Horror section that's more than five Stephen King books, six copies of  Twilight and a lost, dusty Dean Koontz.