Drum-roll, please: in October, the Nobel Prize for Literature was awarded to… none other than Kazuo Ishiguro, the esteemed British novelist and purveyor of hidden glances and repressed emotions.

“If you mix Jane Austen and Franz Kafka, then you have Kazuo Ishiguro in a nutshell,” Sara Danius, the permanent secretary of the Swedish Academy, told reporters when they announced their decision. “But you have to add a little bit of Marcel Proust into the mix. Then you stir, but not too much, then you have his writings.”

Austen, Kafka, and Proust might make for strange bedfellows, but it suggests something about the unpredictability of Ishiguro's writing. His works can range from the poised and contained to the incoherent and rambling. But don’t worry if that sounds like a lot to take in. This guide is for anyone who’s curious about reading him but doesn't know where to begin. 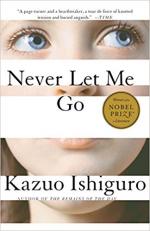 We all have to start somewhere, and you could do worse than starting with Never Let Me Go, one of the most beloved books in Ishiguro’s oeuvre.

Incidentally, Never Let Me Go is also the kind of book that’ll make you the black sheep at dinner parties. Bring it up and you might regret it: people will ask, “What’s it about?” But the less they know about its plot, the better. If you keep mum, they’ll press you for details, at which point you must wail, “I can’t say anything more or else I’ll spoil the whole story for you.” Then they throw a glass of champagne in your face.

Leaving plot particulars aside, I’ll qualify my choice to put Never Let Me Go first because it’s a pretty perfect introduction to Ishiguro’s prose: slow, languid, and deceptively placid. If that doesn’t sound all too exciting to you, rest assured that Ishiguro absolutely means for it to come across that way. The plot moves at a glacial pace. Kathy, our narrator, goes on so many detours in her narration—and for so many pages at a time—that you start to wonder where the story is going, if anywhere at all. (One particularly absorbing chapter is spent meticulously detailing school drama over a stolen pencil case.) Yet at some point you sit up, and dread and unease starts pricking you like a sting. And when all the threads of the book start piecing together, it does so thick and fast, until you find that you can’t look away from a single horrifying truth, and what Ishiguro is saying about ourselves, our code of ethics, and our choices.

There was a movie adaptation, starring big names like Andrew Garfield, Keira Knightley, and Carey Mulligan. I’ll confess: I haven’t watched it yet, out of fear that it’ll ruin the book for me. It’s that kind of a story. So start with Never Let Me Go. It’s an eye-opening, heartbreaking ride. 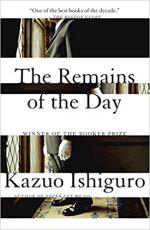 'The Remains of the Day'

Let’s move onto Remains of the Day, Ishiguro’s first Booker Prize-winner. Nothing much happens over the course of this book: Stevens, an English butler, goes on a road trip and comes home. So what is it about this slender book about one old butler that makes it so powerful?

This novel, like most of Ishiguro’s other books, is obsessed with the past: how we forget in order to survive in the first place, and the memories that become a weight that builds until it cracks. But what really makes the novel connect is the glacier of emotion that you can sense lying just beneath the prose. And, skimming over the top of it all, Stevens’ pitch-perfect voice: “It seems increasingly likely that I really will undertake the expedition that has been preoccupying my imagination now for some days.”

Don’t let Stevens’ plain narration deter you. This is a moving, ironic, shrewd, devastating piece of work—my favorite in Ishiguro’s bibliography. And it is witty, which is an underappreciated facet of the book. You’ll hear, for instance, a lot about Ishiguro’s unreliable narrators. There is also much to say about the clever ways that Remains of the Day inverts familiar tropes: the upheaval of P.G. Wodehouse’s innocuous world, for instance. All that discussion is rightly merited. But what I loved most were the small moments in which Stevens struggles to master this English concept of “banter.” Light touches like those are the ones that make Ishiguro’s characters utterly, irrevocably human. They remind us too much of ourselves. If the world is ending soon and you only have time to read two of Ishiguro’s books, make it Never Let Me Go and Remains of the Day. 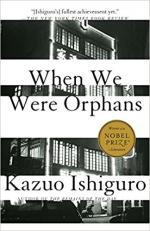 'When We Were Orphans'

Next up in Ishiguro’s works is When We Were Orphans. Full disclosure: this novel met with lukewarm reviews when it was published, though it was still shortlisted for the Booker prize. Even Ishiguro admitted in a later interview, with humorous understatement, “It’s not my best book.”

Having said that, it’s on this list because many of Ishiguro’s fans consider this novel the hidden gem in his chest of treasures.

When you read it, it’s easy to see why it attracts such a divided following. It’s a sad, deeply introspective story masquerading as a detective yarn. Spanning five decades and two continents over the course of its narrative arc, it follows the life and times of a famous detective, Christopher Banks, who’s haunted by a mystery that dates back to his childhood: the sudden, unexplained disappearance of his parents.

If Remains of the Day questions the extent to which our memories are self-preserving fictions, Orphans is preoccupied with whether or not we can (and should) re-live memories. Perhaps Orphans is not Ishiguro’s best, or perhaps you might think it is. Either way, it ventures deeper into the darker undercurrents of our mind. And, by this point (if you’ve followed this suggested order and already read Remains of the Day and Never Let Me Go), you should’ve built up enough patience to read between even the most slippery lines of Ishiguro’s sinuous narratives. 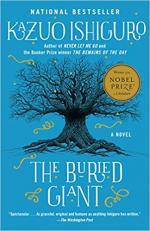 I know—this one’s also a controversial choice, and not just because it caused a mini-feud between Ishiguro and Ursula Le Guin. With The Buried Giant, Ishiguro departed the world of literary fiction and entered the realms of Tolkien and fantasy. After all, when they put down Remains of the Day, I doubt anyone ever commented, “That was a wonderful little book, but what it really could’ve used is a dragon.” Yet that’s kind of what Ishiguro did with the The Buried Giant’s publication in 2015, setting it in a medieval Arthurian landscape. It’s a book that’s at once imaginative, meditative, and—at times—lyrical.

However, the novel bristles with intellect and cold misanthropy—making it at once admirable and tough to adore. Read it if you’re already familiar with Ishiguro’s tried-and-true themes, and want to see how he develops his ideas in the framework of another genre. Neil Gaiman put it best perhaps in his review of the novel: “The Buried Giant is an exceptional novel, and I suspect my inability to fall in love with it, much as I wanted to, came from my conviction that there was an allegory waiting like an ogre in the mist, telling us that no matter how well we love, no matter how deeply, we will always be fallible and human.” 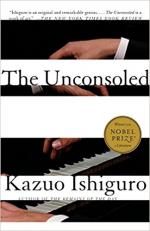 For advanced readers of Ishiguro, welcome to The Unconsoled. When Danius brought up Kafka, she undoubtedly had The Unconsoled on her mind: a hefty tome considered by some to be a masterpiece, while others think it invented “its own category of badness.” After the success of The Remains of the Day, Ishiguro explained this book by saying, “I was a little concerned that a lot of people thought I wrote Merchant Ivory movies. I also thought if I was ever going to write something strange and difficult that was the time. At least, after the Booker, everyone was prepared to give The Unconsoled a go.” And what a hallucinatory and yet strangely sublime go that was.

What if you find yourself hankering to read even more Ishiguro? Proceed to A Pale View of the Hills for his first published novel or Artist of the Floating World for something similar to Remains of the Day. If you’re in the mood for short stories, check out Ishiguro’s Nocturne: Five Stories of Music and Nightfall. His is a world that’s full of immense gravity and slow-moving lyricism, but it’s one that you won’t regret entering.

this is a great primer. Agreed on all counts, including the non-disclaimer on Never Let Me Go at parties. Gives me a new appreciation for The Unconsoled which, I have to admit, needed some determination to get through, even though the sublime moments are well worth it.