The first time I played basketball at a friend’s house, I was the only kid still deploying the two-arm, underhanded “granny shot.” Everyone else shooting overhand was a completely new thing to me. This was a sure sign of a self-taught player who spent a lot of time alone at the hoop.

Self-taught practitioners usually have some quirks to the way they do things. Sometimes these are charming, little things, like the kid who jumped along with Mario until the first time he played with friends and realized what he was doing (I was ALSO this kid). Sometimes the quirks are more of a problem, like the self-taught mopper who’s rubbing the mop head on the floor front to back instead of in a sweeping, graceful side-to-side motion that actually accomplishes the task of cleaning a floor.

My typing style is somewhere in-between quirky and bad. It’s ugly, but it gets the job done.

Is it worth my time (or yours) to work on those typing skills? Would a writer save some time and energy with a little bit of back-to-basics? Will I get to type the word “inbred” over and over?

All About The Base

I took 4 tests to get a ballpark speed.

Test 2: 68 WPM.
This one had me typing up a text about how horribly depressed people with Alzheimer's and Dementia can be. Neat! I’m learning AND typing.

Test 3: 50 WPM.
This one has my typing what I can only assume are the liner notes to a Radiohead album? Not even kidding. I repeatedly typed “Thom Yorke,” which violates my sense of the way “Tom” is supposed to be spelled.

To attempt some training, I played games. TYPING games! Edutainment! 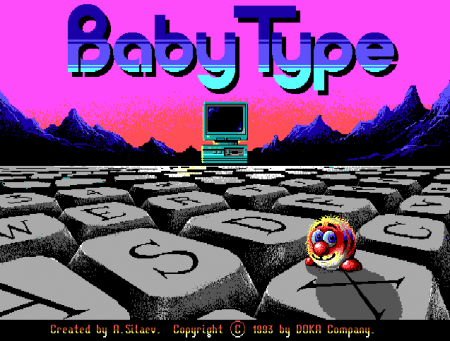 This one greets students with an absolute racket of MS-DOS noise when you fire it up. It’s not even music. I don’t think it was ever intended to be music. But it begs the question: What is it? And why would another human being create this?

The game is the same thing over and over. You move this character, which appears to be a...caterpillar’s head, down a path by typing. You have to type fast enough to outrun bad guys or pneumatic presses or things like that. When a baddie catches you, you’re eaten. 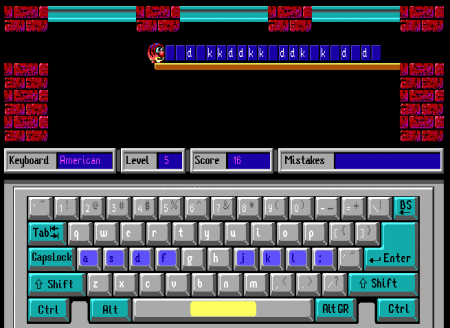 This is really demotivating as a student. My ability to type being tied to the life of a character is a little heavy. Maybe it could just be, I don’t know, a failure means he doesn’t press his pants before going to work and looks a little disheveled? Becoming food for another creature is a harsh punishment.

When you die, you're treated to a de-motivational leaderboard where some assholes set records on this game in the mid-80's. Well, at least there's some comfort in knowing it's entirely possible they're dead. NOW who's the faster typist!? 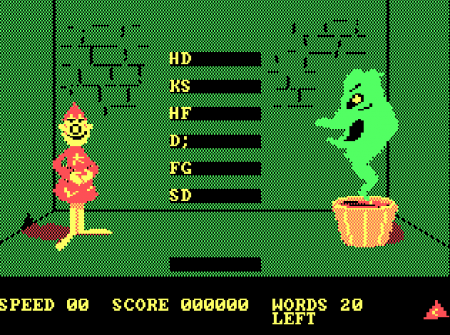 Nothing like a 70’s newspaper comic strip to really bring in the kids!

It doesn’t take long for this one to get old. You shoot lightning bolts of annoying noise at a...maybe snake. Maybe a genie? Hold on, let me educate myself…

Okay, this character is known as “Evil Spirit” and lives in the Wizard’s cauldron. According to Wikipedia, this Evil Spirit has mentioned that it has a sewer wisp as a girlfriend. Likely story. We all know the kid from school who claimed to be dating a sewer wisp who went to another school across town.

Did you know that The Wizard of Id is still going? Not by its original creators, but by some grandsons?

The game is pretty crappy, but it’s also so damn old, and hey, if I made a newspaper comic strip and someone offered me money to make a typing game I’d go for it. If anyone wants to make a typing game based on my life, I will give you an excellent deal on my likeness. I think the premise is “Pete was writing a column when he got distracted and read about a thousand Wizard of Id comics. Hurry and help him finish!” 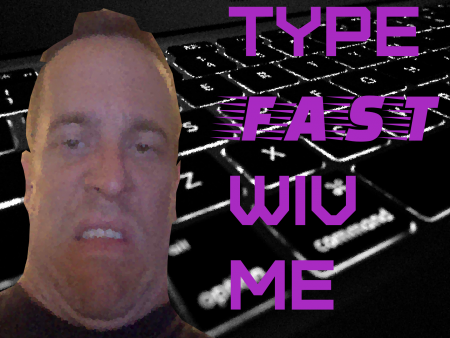 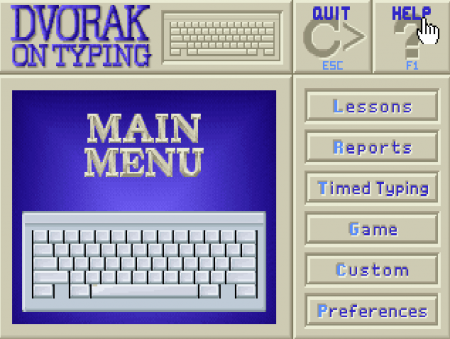 I’ve heard of this Dvorak method, which is an alternative keyboard layout that supposedly allows for easier typing. I say “supposedly” because there has been some evidence to the contrary among nerds who care about this stuff. Nerds of a degree that’s difficult to assess. Measuring such high levels of nerdiness is like something being so hot that you can’t get a temperature gauge close enough to measure without melting it.

This one is barely a game. It gives you a setup, you’re a knight beating the shit out of Pan, then another knight, then a dragon on a pile of gold, and you do it by typing. But it’s not really clear how the action on screen relates to the typing. Maybe it does. I don’t know. I was too busy typing. And not caring. 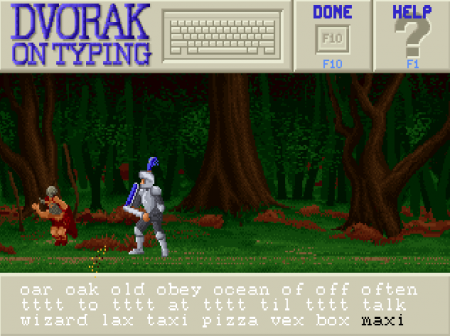 The Dvorak on this game is not the same Dvorak who came up with the alternate layout. Apparently he’s that dude’s nephew. Jesus, ANYONE could get a computer game back in the day.

“I’m the nephew of a guy who invented a cockamamie keyboard layout.” 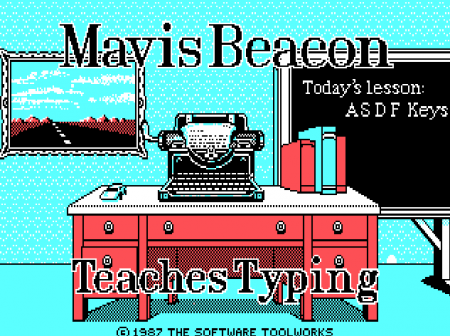 It turns out Mavis Beacon isn’t a real person. Just a made-up mascot for typing software. I don’t know who I thought she was. Some kind of typing champion? I mean, there’s more than one guy named Dvorak, so Mavis Beacon doesn’t seem too far out there.

You mostly type nonsense sentences until you get to the ONE GAME, which is a race against...Mario Olivetti? I can only assume this is a mash-up of Mario Andretti, the driver, and the Olivetti brand of typewriters. Someone was having a lot of fun being real cute with this one. 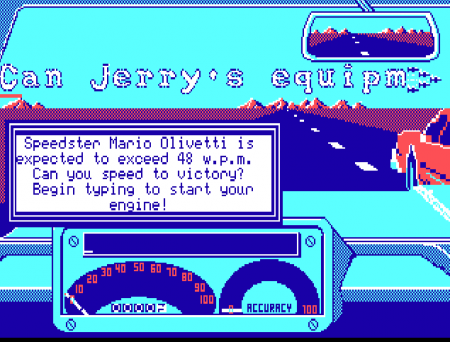 The game sucks. It’s barely a game. But the colors are definitely just old enough to be cool again. 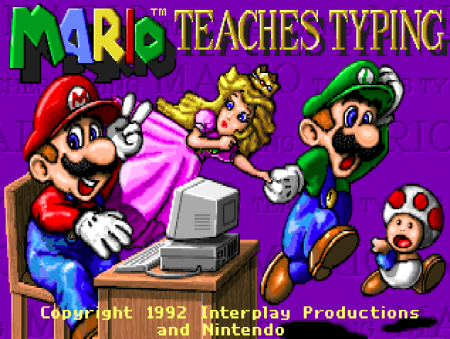 We had this “game” at home when we were kids. I think I played it twice, maybe. Dress it up with all the Mario you’ve got, typing is still typing.

My patience for this sort of thing is low because it’s based on this home keys shit. So you do a level where you type nothing but A, S, D, F, J, K, L, ;. And semicolon being a home key is outrageous. Who decided that? It’s gotta be one of the most worthless keys on the keyboard. Why not just have it be another spacebar? Semicolon is a key that’s pressed WITHOUT SHIFT and yet an emdash is still a special character?

Then you get to the actual typing, and you're typing about...The Civil War's bloodiest battles? 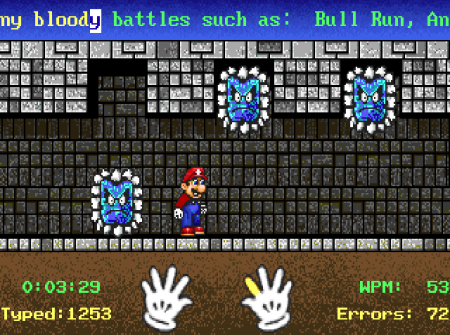 Wha? Why wouldn't they have you typing about, I don't know, SUPER MARIO and his super adventures!?

6. Typing of the Living Dead 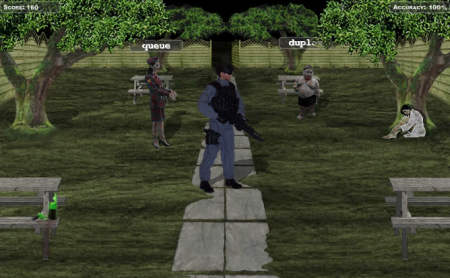 Okay, it’s a knockoff of a really good game. But it still has its charm, and I made it to the LAST LEVEL before I died. Technically, I completed the objectives, so if I can type fast enough to solve a zombie apocalypse, how much faster do I need to get?

One curious thing about this one, the words were...different. I saw "yokel," “beaver,” “snatch,” “turgid,” “inbred,” and repeatedly “x-rated.” I will admit, this was a lot more fun to type than “lkdd;;.” But it does make me suspicious that this was designed by a teenager. 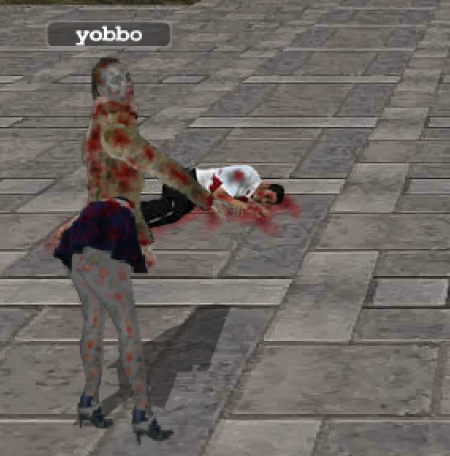 Not only do I type "yobbo" to make this zombie die, not only does she seem to be in an oddly short skirt, and not only is her anatomy so weird that it's like I SHOULD be able to see her entire butt, but I can't, but maybe I can and what I'm seeing is, in fact, her butt—not only all of that, but her expression, whenever she comes on screen, looks directly at the player like, "You're looking at my weird butt, aren't you?" Well, yes, but not in a remotely sexual way. I'm just trying to figure out what happened here.

Test 1: Improvement of 6 words per minute.

Test 2: Improvement of 5 words per minute.

Test 3: Improvement of 15 words per minute (“Your typing speed is crazy”).

Test 4: Improvement of 8 words per minute.

Okay, my typing did improve a little with a pretty small effort. But there are some problems here.

One, these tests really test how quickly you can transcribe, not type. When I’m writing fiction, it’s from my head. Wait, my heart. Wait, my gut. Whatever, it’s all output, no input. I don’t have to process something incoming, then push it out. It’s all internal. So I don’t know how functional these tests and this training might be.

Two, it’s not like I was obsessed with improving my speed when I wrote by hand. How much time would I waste learning shorthand when I could just continue writing fiction?

Three, and this is the biggie, it’s not my typing speed that slows me down. Let’s be honest, wording things right, or right enough, takes a lot more time and energy than hitting those keys.

The glimmer of hope here is that if you really suck at typing, you can probably improve with just a little work. I’m old, I’m only half-decent, and I made some strides in a pretty short time. It might be worth your time.

Besides, it’s always a good time to type words like "turgid" for the sake of learning.

Buy Quirky Qwerty: A Biography of the Typewriter and Its Many Characters at Amazon

5 Video Games that Would Have Made Better Novels

Narrative Failure: The Most Common Error Message in Video Games

Ready Writer One: An Interview With Gabe Durham Of Boss Fight Books