Library Love: Go Forth and Wiki!

Wikipedia used to be my nemesis. I spent so much time and effort explaining how to find peer-reviewed sources to students, and then they would turn around and use Wikipedia. Because it's easy. And often the first thing to show up in a Google search. The fact that anyone — like anyone off the street! — could write an entry was a real issue to me and my academic peers. Where was the quality control? Nowhere, I thought.

Meeting space, wireless, and snacks seem to be the basic requirements.

It took a while, but I have since softened my stance on Wikipedia. It helps that the entries have gotten better over time. It also helps that the infrastructure of Wikipedia has developed. There are now so many people contributing to the source and creating rules and guidelines for it that it no longer feels like the Wild West; now it's more like a hive. It is still true that anyone can create a Wikipedia article, but the high number of editors scouring the website for inaccurate content means bad articles don't stay for long. Wikipedia has a verifiability requirement, meaning information has to come from a reliable source, peer-reviewed published content being the most desirable type. Original research is not allowed on Wikipedia, and all entries must have a neutral tone. My younger self would be astonished to learn that the current entry for J.S. Bach in Wikipedia lists the same respected authors in Bach studies that one would find in a traditional music encyclopedia.

Wikipedia has become the impressive resource it is because of its contributors. Unfortunately, women are contributing in astonishingly low numbers (less than 15% of editors are women) and that deficiency in contribution is reflected in content. In fields across the board, men receive greater representation than women. It may have been the American Novelists debacle in 2013 that brought this issue to the fore. Amanda Filipacchi noticed that women had been moved off the "American Novelists" Wikipedia page onto a separate entry called "American Women Novelists." She wrote about it for the Times, and the Internet exploded. In 2014 we started seeing Wikipedia edit-a-thons specifically to create or expand entries on women. This year, there was an international edit-a-thon called Art + Feminism which hosted events all around the globe on or near International Women's Day (March 8), and tackled entries on female artists. Participants brought laptops and learned about article editing and creation, then were set loose to do their work.

So where do you come in? Well, there will certainly be another Art + Feminism event next year, but in the meantime, why not host your own event? Wikipedia offers some friendly advice on how to do this; meeting space, wireless, and snacks seem to be the basic requirements. Edit-a-thons can generate a lot of publicity, so focus on an area you care about and make a list of holes in coverage that you would like to address. If that sounds like too much work, you can start small. Create a free account in Wikipedia and start editing entries, or use the article wizard to create a new article. Make sure to do a thorough search for your topic first, however, or it may not last long. 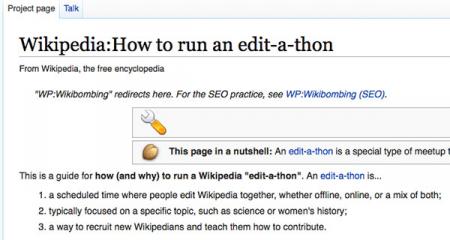 Create Your Own Wikipedia Tome

Library Love: A Librarian Told Me - Research Guides For Every Subject

Library Love: A Matter of Degree - Is Library and Information Science Really The Worst Master’s Degree?