Welcome to LitReactor's Flash Fiction Smackdown, a monthly bout of writing prowess. You get 31 words and 3 holiday song or movie titles.

We give you inspiration in the form of a picture, poem, video, or similar. You write a flash fiction piece, using the inspiration we gave you. Put your entry in the comments section. One winner will be picked and awarded a prize.

It's a Trekkie's dream come true (and no, I don't mean that George Takei will personally take over your Twitter account). Titan Books is offering a two-book prize pack. Winners will get a copy of Star Trek: The Art of Juan Ortiz  and David A. Goodman's Star Trek Federation: The First 150 Years. Here's a summary of each from the publisher: 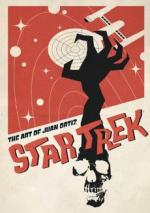 What if every Star Trek: The Original Series episode was a movie event? What would the movie poster look like? This was the inspiration to develop a one-of-a-kind set of images for the series that launched a franchise. Artist Juan Ortiz has created unique retro-style art with the look of a 60s movie poster, comic book, pulp novel cover or advertisement, one each for all 80 episodes.

Juan Ortiz is an avid Star Trek enthusiast and an accomplished artist that set out to create an art program representing each of the 80 episodes from the Star Trek: The Original Series. The artwork embodies his passion for the series, the transformational Sixties, and the visceral reaction generated from each episode.

Since 1985, Juan has been an illustrator/designer for Disney and Warner Bros. and has penciled covers for DC Comics’ Looney Tunes and Tiny Toons magazines. He is also the publisher of his own comic book series, Silver Comics, seen in the Disney/Dreamworks release I Am Number Four (produced by Steven Spielberg) as well as The Skull Army, a macabre/detective pulp, featuring his creation (named) The End. 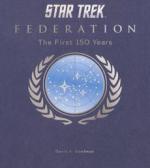 For the first time, an ‘in universe’ history of Star Trek, complete with excerpts from Starfleet records and intergalactic intelligence, including James T. Kirk’s official biography and newly translated Klingon reports.

Star Trek Federation: The First 150 Years celebrates the 150th anniversary of the founding of the United Federation of Planets.

This unprecedented illustrated volume chronicles the pivotal era leading up to Humankind's First Contact with Vulcan in 2063, the Romulan War in 2156, the creation of the Federation in 2161, and the first 150 years of the intergalactic democracy up until the year 2311. Meticulously researched, this account covers a multitude of alien species, decisive battles, and the technology that made the Age of Exploration possible. It includes field sketches, illustrations, and reproductions of historic pieces of art from across the Galaxy, along with over fifty excerpts from key Federation documents and correspondence, Starfleet records, and intergalactic intelligence.

Since you pretty much can't escape them no matter how hard you try, put all those holiday songs and movies to work as inspiration for a Holiday-themed Flash Fiction story.

This month, there will be a 31-word limit (you know, 31 days in December)  but no limit on number of sentences. Also, your story must include a minimum of 3 holiday song or movie titles. The titles can be worked in to appear almost unnoticeable or you can directly use the titles as part of the story.

Also, assuming I have not seen or heard every holiday-related song or movie, you may want to list them after your story, underline them, or even hyperlink them, so that I will be sure not to miss your ingenious inclusion of Rare Exports or some other obscure (but AWESOME) holiday movie or song. (Rare Exports, BTW, is one of the BEST Christmas movies I've ever seen. Creepy and amazing...)

Good Luck, and Happy Holidays everybody!

And the winner is...Ben Jackson

There were a lot of great entries this month, but Ben's is the only story with a holiday movie I'd never heard of! I love the use of dialogue and the reference to the Alvin and the Chipmunks song. Well done, Ben!

A Christmas Lament on Boxing Day

“Gimme a lemon drop, kid,” Alvin called to the bartender.

“Have yourself a merry little Christmas?” the barkeep asked.

Where do you submit this, or does it go here, as a comment?

A Christmas Lament on Boxing Day

“Gimme a lemon drop, kid,” Alvin called to the bartender.

“Have yourself a merry little Christmas?” the barkeep asked.

"I want a hippopotamus for Christmas," Leo Felida sighed as bullets rang off the zoo cage bars like silver bells in the otherwise silent night. "They taste delicious."

Under the Christmas Moon

"I need to talk to you," she says, voice quivering in the silent night.

He quirks his brow. "About?"

He smiles. "Baby, it's cold outside. Let's go somewhere warm."

Searching the "housing swap" section on craigslist, Frosty found his solution.  The email to lildrummerboy@gmail.com simply stated, “Hate the heat? We should be trading places.”

One Silent Night God brought more Joy to the World  by breathing life into dogs, cats and hamsters. A Little Drummer Boy proclaimed, "Amen," and the world rejoiced.

Four Christmases ago, in the shadows of a burning street fire I saw what looked like three gremlins chanting “white christmas” incessantly. I found no comfort and joy that night.

The babes in Toyland glittered under the flashing lights. “Let’s go Daddy,” she tugged his coat-sleeve, “Mummy’s home alone for Christmas.” “Yes, Virgina,” but he couldn’t split from the shimmering sirens.

Geekamicus from The Rockies is reading The Complete Roman Army by A. Goldsworthy December 7, 2013 - 6:23pm

Why I am the Way I am

It came upon a midnight clear, word that Grandma got run over by a reindeer. It was then, after the funeral, that I saw Mommy kissing Santa Claus. I was Scarred.

Dino Parenti from Los Angeles is reading Everything He Gets His Hands On December 7, 2013 - 9:52pm

“Purr me a Christmas story, sweetheart. Something saccharin.”
“It’s your money, Santa baby. Keep the boots on if you want.”
“Naughty girl. Or is it…?”
“Name’s Mistletoe and Holly. Whatever jollies.”

Nice job on that one, natso.

A Farewell to Grams

Grandma got run over by a reindeer.

“Happy X-mas, the war is over” the radio blared.

Everyone froze. On this silent night they were saved.

The shrieking of a descending bomb made them think, well there’s always tomorrow.

Bring Us Some Figgy Pudding

“We wish you a Merry Christmas!” the carolers sang as they mobbed Figgy Mancuso, their knives drawn and leaping at his face. This would be his last Christmas, a black Christmas.

My father’s nickname is The Hebrew Hammer. “We’re no Angels,” he says, “but the bills get paid.”
The man who came to dinner was clearly terrified, just how dad liked it.

“Figured I was home alone.” I shrugged.

“You’re a bad Santa stealing silver and gold.” The policeman smirked. “Instead of a Holiday Inn you’re spending the holiday in handcuffs.”

Know that the birth that slouched toward Bethlehem now hisses at our feet! And we’ve no mountain to tell it on. Christmas once white, now darkened by that o’ holy night.

1. do they know it's christmas?

2. go tell it on the mountain

"The Last Christmas at SETI"

It came upon a midnight clear: a new signal near the Silver Bells, pulsars too similar in rhythm to be natural. Three gamma bursts, then a silent night. Their arrival heralded.


I called the North Pole immediately.

That evening, Grandma got run over by a reindeer.


I called the North Pole immediately.

That evening, Grandma got run over by a reindeer.

Wishing For A Snowblown Christmas

After the police crackdown it was Silent Night in Manhattan, but he looked for A Miracle on 34th Street. When he saw the fishnet stockings he thought: It's a Wonderful Life.

Congrats to Ben for the excellent flashing.

You evoked many childhood memories, for many people and even created sensory detail.

Thanks all!  This was fun, and it was especially fun to read all the great shorts.

"Jingle Bells" is one of the most popular Christmas songs in the world however, history tells us it is not specifically a Christmas song. Known today as a fun and laughter filled Christmas song and is popular as the subject of parody. James Lord Pierpont originally wrote the song in 1857 and was owned at the time as "One Horse Open Sleigh".