Philip K. Dick occupies a unique position in the canon of 20th century Science Fiction. Despite working for his entire life in a field that is often dismissed as mere genre, Dick enjoyed numerous accolades from the mainstream while alive. And in the years since his death in 1982, Dick's work has become even better known and respected. Primarily, this is because of the many films that have been adapted from his work. But fans of Science Fiction who have neglected Dick's novels and shorts stories are truly missing out on one of last century's finest writers.

Dick led an odd and iconoclastic life, much of which became fodder for his writing. He was born prematurely with a twin sister Jane, who died six weeks later. As Dick's wikipedia page mentions, a lingering sense of loss - and the concept of twinning - would stay with him as an adult and reoccur in his writing. Always interested in philosophy and the nature of human perception, Dick started to have religiously-themed hallucinations in the mid-1970s. He came to believe that he was experiencing both his own consciousness and that of Thomas, a Christian living in the first century, A.D. (Later, Dick also claimed to have been visited by the spirit of the prophet Elijah.) Drawing upon these experiences, Dick wrote what was to become his "Valis Trilogy"- VALIS, The Divine Invasion, and The Transmigration of Timothy Archer- as well as in the semi-autobiographical Radio Free Albemuth. As you might expect from one of Science Fiction's most effective weirdos, the books are simultaneously bizarre and earnest, but undeniably entertaining. (Anyone interested in learning more about Dick's life should read Lawrence Sutin's great biography Divine Invasions: A Life of Philip K. Dick.) 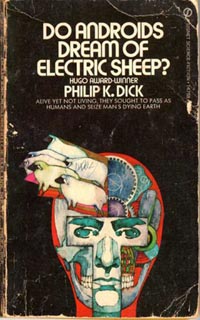 Do Androids Dream Of Electric Sheep?

Novices to the world of Dick should begin with what has become his best known work, the 1968 novel Do Androids Dream of Electric Sheep?, the source material for the 1982 film Blade Runner. Unlike the stylish, neo-noir setting of the movie, Dick's novel takes place in an America that has been decimated by a devastating nuclear conflict, World War Terminus. The few humans who survived are encouraged by the government to emigrate to "off-world colonies" on Mars and other planets. Those that do are given an android, bio-machines created in humanity's image but regarded as chattel that are forbidden to leave the colonies and come to Earth.

This somewhat standard sci-fi premise is given its Dickian twist with the introduction of Rick Deckard, a bounty hunter whose job it is to hunt down rogue androids that are posing as human. The entire crux of the plot turns on humanity's ability to both define and protect itself from this artificial "other." As might be expected, Dick approaches this material with both a flair for story and a finely-tuned sense of the absurd. Thus, one of Deckard's main tools is the fictional Voight-Kampff test, which uses empathy to distinguish humans from androids. The short book also contains two invented religions, a topic Dick loved to explore. One takes the form of the children's show "Buster Friendly and His Friendly Friends," and is meant solely for androids that are looking for a spiritual connection. The other religion, also based on a TV show of sorts,  is Mercerism, whose followers use "empathy boxes" to feel what the Christ-like Mercer feels as he is attacked by unseen assailants. The seemingly obvious connection between Mercerism and Dick's hallucinations is complicated when you remember that the book was published some six years before the visions began. 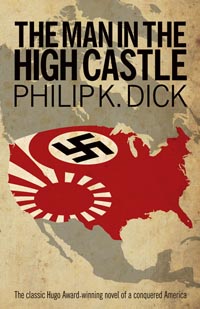 The Man in The High Castle

Having gotten a taste of Dick's signature odd style, a new reader's next step should be 1962's Hugo-award winning novel The Man In The High Castle. Set in a near-future version of a world where the Allies have lost World War II, the book blends alternative history with science fiction in exciting and disturbing ways. Much of the action takes place in Dick's beloved Bay Area (he was born in SF and attended both high school and college in Berkeley), which here is part of the Japanese-controlled Pacific States of America. In Dick's world, Japan controls half the globe, including about a third of the US, while the German Reich controls the other half. The events of the book take place in 1962, some 14 years after the end of its World War II. Japan and Germany have fallen into a Cold War of sorts, as the Reich has begun colonizing Mars and the Moon, while Japan lacks the necessary technology to compete. And as for religion, always a featured topic in Dick's work, the I Ching is the dominant spiritual book on the West Coast.

Despite all the unfamiliarity of this world, Dick manages to make the setting seem eerily possible. What's more, the book contains a thrilling plot as well, using multiple storylines to explore the intrigue that surrounds a Nazi spy's visit to San Francisco. As the two powers struggle, ordinary Americans try to reinvent themselves, either by embracing pre-War culture or attempting to create new forms of expression. The most successful of the latter is a book-with-the-book, another alternate history that tells the story of our world, that is, where the Allies won World War II. That Dick would have the nerve to introduce this component to his story - it's a central piece of the plot - and have the ability to pull it off is testament to his skill as a writer. What's more, the book-with-the-book serves as a particularly fine example of one of the many twins that populate Dick's work. 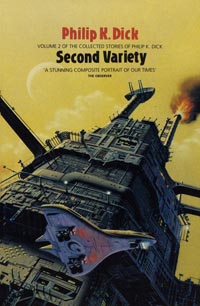 From these two novels, the next step in getting up to speed on Dick's work is to look at his short stories. From his first sale in 1953 until his death, Dick wrote numerous short stories in an ultimately vain attempt to find some sort of financial stability. (Dick's money troubles were as legendary as they were extreme. Fellow author Robert Heinlein even bought him a typewriter once.) It's somewhat of a cheat - although one I've done before - but I believe the five-volume set The Collected Stories Of Philip K. Dick is the final step towards becoming an informed reader of his work. Through the books, you can see not only Dick's development as a stylist, but also the always varied ways in which he managed to work his favorite themes of perception, the nature of humanity, and religion into his writing.

At their best, Dick's stories twist a familiar reality into something alien and shocking. For example, The Days Of Perky Pat adds an element of life and death into adults role-playing amidst the ruins of society. Alternately, in The Golden Man humanity's attempts to limit the spread of mutant humans is foiled by a being that is as appealing as he is deadly. And the novella Second Variety introduces a post-apocalyptic world and populates it with "Claws," android-like bombs that walk, talk, and seem human. The latter two stories share a common fate for Dick's work: their sharp, interesting plots have been expanded into leaden, lame films. (The Golden Man "inspired" Next, while Second Variety became Screamers.) Just a glance at the tables of contents of these collections hints at how many of the stories inside have been turned into films: Second Variety, We Can Remember It For You Wholesale (which became both Total Recall and its soon-to-be-released remake), Adjustment Team (The Adjustment Bureau), Minority Report, and the upcoming Disney film The King Of The Elves. Despite the relative successes of these adaptations, their sheer number speaks to the undeniably effective and engaging nature of Dick's work in the short form.

And so, as we prepare for more films with Dick's name in the credits, it behooves every fan of Science Fiction to seek out his original work. Along with the two novels and short story collection mentioned above, Dick is responsible for some of the most intriguingly batshit writing of the past century, including such classics as Ubik; Flow My Tears, The Policeman Said; A Scanner Darkly; and The Three Stigmata of Palmer Eldritch. As a whole, Dick's bibliography is more than worthy of being included with both fellow titans of Science Fiction like Asimov and Clarke, as well as similarly weird stylists like Pynchon and David Foster Wallace.

One last thought, which I hope will convince you that Philip K. Dick's brand of weirdness is well worth adding to your world. At Comic Con in 2006, a life-sized android of Dick made an appearance on a panel for the film A Scanner Darkly, which was about to be released. The creator of the android then took its head on a flight as carry-on luggage and mistakenly left it behind. This head has since vanished - NEVER TO BE FOUND AGAIN. (A replacement android has been built.) Just consider the many levels of insanity at work in this story. And rest assured that, wherever his spirit might be, Philip K. Dick would absolutely love every part of it.

Christina Re from the United States is reading something a friend wrote July 26, 2012 - 8:30pm

The final paragraph about android Dick's head is insane, love it!  Thanks for the article.

Great article. I'm thinking of reading "Do Androids Dream of Electric Sheep?" some day. I red Man in High Castle a long time ago, by accident, and didn't get it much.

What about Ubik and Flow My Tears, Policeman said?