About a year ago, I reviewed the Logitech Ultrathin Keyboard Cover for iPad Air, a sleek piece of tech that made writing on the iPad a breeze. But recently, the company introduced mobile typists to the Keys-To-Go, a lightweight, almost impossibly thin keyboard that works not just with iPad, but with any Apple product (and there's a version for Windows and Android devices as well). This new product generation from Logitech blows their previous innovations out of the water.

There are numerous factors that play into Keys-To-Go's superiority (primarily, this is a mechanical keyboard), so let's dive right in.

I'm sure you've heard of Logitech before. They've been around since 1981, and though they started out manufacturing computer mice, the company has since expanded into numerous ventures, including both desktop and portable speakers, headphones, tablet and smartphone cases, gaming equipment, and of course, keyboards. Read more about the company at The Logitech Story page on their website.

Thin: As previously mentioned, the Keys-To-Go keyboard is pretty damn skinny. It sports an overall depth of 0.24 in (6 mm).

Lightweight: I can't stress the lightness of this device enough. It weighs a mere 6.35 oz (180 g). It feels like nothing in your hands.

Compact Design: Keys-To-Go is 9.53 in (242 mm) long and 5.39 in (137 mm) tall—smaller than your average keyboard, but this scaling down doesn't sacrifice the typing experience (I hit my usual speed three out of four trial runs). These dimensions combined with the weight and depth makes slipping the keyboard in and out of a bag easy. It's also not too bulky to carry around by hand, if you prefer.

Bluetooth Connectivity: I don't need to expand upon this feature much. Bluetooth is pretty much the wireless standard these days. If a portable keyboard doesn't offer Bluetooth, it is a waste of money.

Three-Month Battery: Yep. Of course this will vary depending on how much you use the keyboard, but I've seen no complaints about battery life so far.

Special Mobile Keys: Whether you use Apple, Windows or Android, Logitech provides special keys like a "Home" button, multi-tasking and search functions, plus volume and brightness control.

Three Colors: If you're not satisfied with the utilitarian sexiness of black, you can get your Keys-To-Go in red or blue (there's no red option for Windows/Android).

FabricSkin Exterior: I'm hard-pressed to discover exactly what materials have been combined to make this FabricSkin, but from a tactile standpoint, it feels like what it sounds like—a hybrid of gripping fabric and slick, rubberized skin. Not too slippery, not too tacky.

Spill-Resistant: Technically a sub-feature of the FabricSkin exterior, but it's important enough to merit its own section. The actual keys are sealed beneath the cover, so if you spill your morning cup of Joe on this thing, you literally do not have to panic (you know, unless you get liquid on something other than the keyboard). Watch a hand model dump their soda all over the Keys-To-Go in the video below.

Mechanical Keyboard: I teased this one in the intro, but yes, the Keys-To-Go is a portable mechanical keyboard.

If you're not familiar with the benefits of mechanical over membrane keyboard technology, essentially membrane keys (the current standard in most built-in laptop and in-box desktop keyboards) require you to press a key completely down before it signals the computer to make a mark on the screen (so, if you want to make a 'B,' you have to press the B key all the way down, otherwise a B will not appear). Mechanical keyboards, on the other hand, rely on a switch-based system that does not require a complete depression to activate, meaning that with some practice you'll actually begin using much less force while typing. This also means less stress for your carpal-tunnel-prone hands and overall faster typing speeds.

The downside to most mechanical keyboards is their bulk. Remember the olden days of computer technology, with those tombstone-sized keyboards? Yeah, those are mechanical keyboards, and they haven't changed that much since the late 1980s. Other companies have tried to manufacture a slimmed-down, portable mechanical keyboard, mostly with unimpressive results; Logitech succeeds here where others have failed. 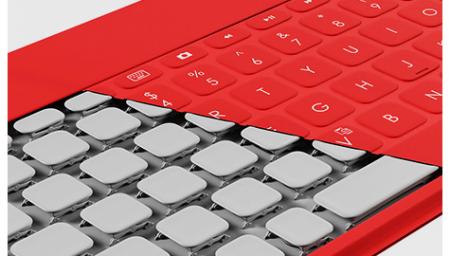 Not so much a downside, really, but if you're not used to mechanical keyboards, you'll have a small hurdle to overcome. It doesn't take long at all, though, and your hands will naturally adjust to a lighter touch over time.

Other than that, I found resting the keyboard on my lap a bit uncomfortable, but that doesn't really matter. Typing that way is really bad for the back anyway.

The Logitech Keys-To-Go costs $69.99. This may seem steep, but realize you'll be paying this much or even more for most other high-quality keyboards on the market, and they are likely not as compact or versatile, nor will they likely be mechanical. Moreover, the Keys-To-Go is built to last, so seventy bucks is a good price to pay for something this beautifully-crafted and long-lasting.

You can order Keys-To-Go with your choice of color for Apple or Windows/Android from Logitech's website, via Amazon (linked below), or you can pick one up at most big tech stores.

Has anyone in the LitReactor verse and beyond used Keys-To-Go? What are your thoughts? Any other Bluetooth keyboards with mobile support you guys like? Let us know in the comments section. And of course, if you have a keyboard or any other writerly product you'd like to see reviewed here, send an email with a link to tech@litreactor.com and I'll check it out.