Back in the late eighties/early nineties people complained that they'd have to replace their entire vinyl and cassette music collection with the new, supposedly superior CD audio format. Ditto complaints with the advent of iTunes, Amazon Music and other digital sound file shops. The same thing happened when DVDs became the standard format for home entertainment, replacing the VHS—and again when Blu-Ray discs rose to prominence. And now, add books to the list of media we have to consider replacing or at least digitizing, since (like it or love it) eBooks are swiftly ousting their printed counterparts (note that I'm not taking sides here, just reporting the facts).

In every instance, there's never been an affordable way to obtain digital versions of the physical media you already own—if you wanted the Blu-Ray edition of GoodFellas, for instance, to replace your ancient DVD copy with the movie split between two discs, you simply had to hope for a sale or just shell out the bucks for it. Same goes for books—it's possible there might be a flash $1.99 discount on Amazon, but there was no guarantee of that actually happening, so if you wanted the eBook as a companion to your paper copy, you either had to wait potentially in vain or just pay full price for it.

That is, until Shelfie came along, an ingenious and easy to use service that gives you access to free or heavily discounted eBook versions of the physical books you already own—because, honestly, why should you pay full price for a digital book when you paid just about as much, if not more, for the printed edition?

We'll get into the specifics of Shelfie and how it works in a moment, but first let's talk a little about the company itself.

Shelfie was developed by Peter Hudson and Marius Muja, who met while studying at the University of British Columbia. According to an article from TechCrunch by John Biggs, the idea for this service arose from a drunken argument between Hudson and a friend:

We were discussing whether or not D-Wave's quantum computer could be used to disprove the phenomenon of human free will. Dan had just read Stephen Wolfram's A New Kind of Science and remembered a part that would prove his point. Frustrated that he couldn't' produce his trump-card citation Dan said "I wish there was a way I could get digital versions of all my paper books on my phone."

From there, Hudson self-financed Shelfie as a means of giving his friend—and pretty much everyone with the same dilemma—the ability to do as he wished. Now, the service can recognize around 45 million titles, with 150,000 of those available for free or for a significantly reduced price, a number the Shelfie website says is rising every day.

In the aforementioned TechCrunch article, Hudson was quick to point out just how unique his service is:

The only other bundling service available to readers is a program called Kindle Matchbook...[which] only has about 80,000 titles available (although most are self published books from Kindle Direct publishing), and only works if you purchased the print edition through Amazon.com using the same email address that you have registered on your Kindle...Shelfie works for any book you own, no matter if you bought it new at B&N, used at The Strand, or got it as a gift.

Sounds pretty awesome, yeah? But just how does Shelfie work? Let's jump into that right now.

Simplicity: There isn't much need to break down Shelfie into its minute components, because there aren't a lot of needless frills built into it. The app does what it says, and when starting out, it guides you every step of the way. 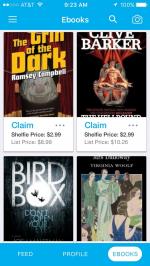 You take a "shelfie" (a photo of the books on your shelf), and then the app simply scans through the titles on the book spines and notifies you when it's finished. From there, you can scroll through the eBooks on offer and choose which ones you'd like to download. If a title on a spine was difficult to discern in the photograph, Shelfie may miss it during the scan process, but not to worry, because you can always go back and individually scan the barcode of any book and see if it's available for free or a heavily discounted price (which of course is beneficial for new book purchases).

For the social media-minded individual, there is a "feed" section where you can see other "shelfies" from users of the app who share your reading tastes—i.e., if you read a lot of horror, you'll see users who are also horror fans. You can't friend or follow these people in anyway, but that's not the point, as the aim of this feed is book discovery, not online pseudo-friendship.

Overall, Shelfie is perfect for readers because it allows them to affordably own both physical and digital copies of their books, which guarantees you'll always have something to read on hand, be it a book on your shelf at home, or an eBook on your phone or tablet, not to mention the ability to more quickly reference any book by searching for keywords in the digitized edition (Dan's original dilemma). But Shelfie is also great for publishers, because it generates the potential for increased profit on, effectively, one book sale, as well as increased visibility (and thus, promotion) via the social feed function of the app. And for the same reasons Shelfie is beneficial to publishers, it is beneficial to writers as well. In short, Shelfie is pretty much great for everyone, because everybody wins. 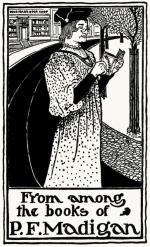 I hesitate to even call it a downside because there's an easy fix, but in order to claim your eBooks, you're required to write your name on the copyright page. This is intended as a final measure of protection for the publishers, a sort of "proof of purchase," if you will, so I get it. But I also harbor a strange quirk that prevents me from even considering the notion of marking up one of my books. It's not a judgment call on people who do write in their books, it's just my own personal hang up that I cannot get past.

If you're like me, this aspect of the eBook claiming process may turn you off to using Shelfie, but as I stated above, there's a workaround to this. You can, as Hudson recommends on the Shelfie Blog, create an Ex-Libris bookplate (a fancy name tag for your books). Simple as that. I did this for my hardback copy of Joe Hill's Horns and it worked like a charm (and speaking of Mr. Hill, he has generously decided to make ALL his books free through Shelfie).

Shelfie is available for Apple iOS devices and Android, and it is one hundred percent free.

Has anyone here already given Shelfie a try? What are your thoughts? Let us know what you think in the comments section below. And as always, if there's a writerly product or service you'd like to see reviewed here, just send a link to tech@litreactor.com, and I'll take a look.

Taylor from Durango, Colorado but living in Portland, Oregon is reading The Paradox Hotel by Rob Hart October 29, 2015 - 9:09am

OOh! I love this idea. I am always wanting to reference my hardcopy books or re-read them.