When you think of Santa Claus, what do you see? You likely picture a jolly, round old man with a flowing white beard. He likely wears a red suit and red cap. Perhaps there are cookie crumbs in his beard, a wishful child on his knee. Like the NSA, he’s got a list and you’re on it. Have you been naughty or nice? Too late to delete your browser history. Santa’s seen it. Don’t worry, he’s into redheads too. At least, he’s into one particular redhead in Robert Devereaux’s trilogy of bizarre, erotic Christmas novels. Devereaux’s Santa is a very different one than you or I grew up with, but strikes closer to his pagan origins than the modern American version, which was shaped in part by Coca-Cola, who dressed him up in a red suit so he’d match their product.

In the beginning of Santa Steps Out, the first novel in the Santa Claus Chronicles, we find Santa preparing for another successful Christmas. He lives with his wife, Anya, and a legion of worker elves at the North Pole. He’s the Santa you thought you knew, but on Christmas Eve, as he delivers presents to children throughout the world, someone is watching him, lusting for him. You might know her as well. She’s the Tooth Fairy. See, before he met Anya and settled into his current life, Santa had a past. A decadent, perverted past in which he and the Tooth Fairy were lovers. Together they saw that no sexual vice went unexplored, and now she wants him back. Christmas is her perfect chance to seduce him, which she does. I won’t spoil the details, but I will say one of their lewd escapades results in a frosted Christmas tree, which an unknowing family takes particular pleasure in upon waking. Yeah, this book is disgusting.

The first thing that distinguishes 'Santa Steps Out' from the countless weird, pornographic novels out there is the refined prose and richness of character.

Santa, guilty over his lapse in faithfulness, confesses all to Anya, who forgives him. But the Tooth Fairy isn’t finished with Santa, and his ancient lust for her has returned. Only a short time passes before he gives in to temptation once more, in his workshop, surrounded by creepy life-size dolls. At this point, Santa more closely resembles the god Pan than the jolly old elf who lets children sit on his lap in shopping malls. But if Santa Steps Out ended there, with two beloved myths engaging in debauchery together, the novel would be nothing more than an extended version of a sexually-charged satire that might be found in Penthouse.

The first thing that distinguishes Santa Steps Out – and the rest of the trilogy, which we’ll touch upon momentarily – from the countless weird, pornographic novels out there is the refined prose and richness of character. As legendary editor David G. Hartwell points out in his introduction, Devereaux’s work has more in common with Jacobean drama than it does with the many gore- and sleaze-saturated novels that flooded the book market in the eighties, when Santa Steps Out was first written. Santa, Anya (or Mrs. Claus), and the Tooth Fairy are fully realized characters confronted with authentic human trials and emotions. This isn’t simply a story about Santa being naughty. It’s about adultery, innermost desires, and how people can only end up being themselves.

The other thing is that Devereaux doesn’t rest on his laurels. After the initial Santa/Tooth Fairy premise is set up, Devereaux introduces the Easter Bunny into the mix, and the Easter Bunny happens to be fixated on Mrs. Claus. Making the discovery of Santa and the Tooth Fairy’s dirty secret, the Easter Bunny succeeds in leading Anya to catch them in the act. That’s when the book takes a sudden orgiastic detour and turns bugfuck insane.

The path to publication for a book of this nature is easier now than it was in the late eighties and early nineties. Back then, New York publishing was pretty much the only game in town. Many excellent independent presses were around, but they didn’t exist in the numbers they do today. If you wanted to sell your erotic horror novel about Santa Claus, you pretty much had to take it to New York. Due to the high quality of the work, Devereaux had little trouble securing an agent, and the book was shopped around. David G. Hartwell, then with William Morrow & Co, passed on the novel, but eventually requested a rewrite. Unfortunately, nobody else at William Morrow wanted to back Hartwell, and the book remained without a home. Six years later, Robert Devereaux was having a beer with friend and editor Pat LoBrutto at a writing conference in Colorado. Upon hearing that Santa Steps Out was still unpublished, he offered to take it to Tor, where David Hartwell was now Senior Editor. With LoBrutto on board as Editor along with Harwell’s support, Santa Steps Out seemed like it had finally found a home at Tor. Unfortunately, either because the marketing department felt the book would be commercial (and financial) suicide, or due to some other unknown factor, Tor also passed. It was then that Dark Highway Press, a relatively new small press horror publisher, came into the picture and released the novel as a limited edition hardcover. Two years later, Don D’Auria acquired Santa Steps Out for a mass market edition with Leisure Books. This novel about Santa Claus’ unspeakably obscene sexual escapades was going to be available not only in bookstores, but in every bookselling drugstore and grocery store in the country. This was not just another vampire novel or ghost story. It was Henry Miller on an acid trip to hell and back. 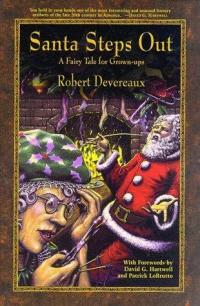 As luck would have it, the mass market edition did make it out into the world, but its shelf life was not without controversy. A Cincinnati man who purchased Santa Steps Out became so outraged over the book that he took it to Cincinnati news channel WLWT. The station ran with it, allowing the man to vent over the book on air, making false accusations about its content. They even confronted the branch of the Kroger grocery store chain where he’d bought the book. Although the story did not spread beyond the greater Cincinnati area, Kroger pulled the book from all their stores throughout the country. Twelve years had passed between the first draft and the book being the center of one of the least known – albeit significant – free content battles since the days of Grove Press. Fortunately, Santa Steps Out had already sold through 70% of its initial run, so all was not lost. Santa Steps Out gained a small cult following and Devereaux went on to publish two other books with Leisure, but no further Santa books would appear until the early millennium.

If Santa Steps Out heralded the rise of a new star, like Evil Dead and Bruce Campbell, then its sequel, Santa Conquers the Homophobes, was Evil Dead II: a gleefully insane romp that showed the star rising to an entirely different level. Only, not content to shock and titillate, Devereaux followed up the first book in his trilogy with a more subdued, thematic tale about the perils of hate and prejudice, particularly against those with sexual orientations different than one’s own. Despite tempering the sex and violence, Robert Devereaux found that his follow-up novel was still too weird for mainstream publishing, and eventually he decided to self-publish Santa Claus Conquers the Homophobes. That edition remained in print until two years ago, when Deadite Press re-released both books in the Santa Claus Chronicles in new trade paperback editions. And just this December, twenty-seven years after Devereaux wrote Santa Steps Out, the third and final novel in Devereaux’s trilogy, Santa Claus Saves the World, has finally been published. Like the second book in the trilogy, Santa Claus Saves the World is rooted in a positive message that suits the Christmas spirit, only instead of ridding the world of just homophobia, this time Santa wants to reconstruct the psyche of the entire human race in hopes of spreading happiness further than he ever has before. Considering a certain terrible human being/reality television star spreading waves of negativity in the media this holiday season, the Santa Claus Chronicles, in particular the second and third entries, are timelier than ever

Cameron Pierce is the author of eight books, including the Wonderland Book Award-winning collection Lost in Cat Brain Land, the controversial cult hit Ass Goblins of Auschwitz, and most recently, Die You Doughnut Bastards. His fully illustrated novel Fantastic Earth Destroyer Ultra Plus (w/ Jim Agpalza) is forthcoming in hardcover in November 2013. Cameron is also the head editor of Lazy Fascist Press and has edited three anthologies, most recently In Heaven, Everything is Fine: Fiction Inspired by David Lynch. He regularly writes about fishing and beer for ManArchy Magazine and is hard at work on Our Love Will Go the Way of the Salmon, a collection of fishing short stories set in the Pacific Northwest. He lives with his wife, dog, and cat in Portland, Oregon.

The Horrors of Children's Christmas Books

No One Cares About Your Life Story: 9 Tips for a Better Author Bio