Season of the Witch: Six Dark Fairy Tales Everyone Should Read

The term fairy tale is often deployed for things that seem too good to be true (say, a fairy tale romance). But of course that's misleading; real fairy tales are as dark as stories come.

The term has also been deployed to diminish the weird work of female authors—who, in eschewing the cold, hard truths of realism, it has been assumed, must be writing for the nursery.

Of course fairy tales have long been loved by children. But the tender tots of yesteryear—prone to a whole host of deadly diseases—were raised on harder stuff than Disney, and in recent years, the walls between the fantastic and the realistic, genre and literary, have in many ways come tumbling down.

And it's about time, is it not?

After all, when our ancestors gathered around campfires, they did not tell realistic tales of the bison hunt gone wrong; they told stories of monsters and giants and talking animals. As such, the fantastic is not some odd little outgrowth of the narrative tradition, but rather, the root of the narrative impulse itself.

Below are six dark fairy tales everyone should read, by the women who've reinvented the form. 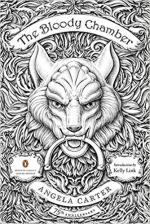 1. "The Bloody Chamber" by Angela Carter

Beautiful, disturbing, deeply weird and unabashedly feminist, Carter's work was widely hailed in her native UK for challenging the way women are represented in fairy tales. Her work has taken decades to receive proper acknowledgment across the pond, but it has nevertheless managed to inspire nearly every other author on this list.

In "The Bloody Chamber," a story in her seminal collection of the same name, Carter digs deep into the fairy tale "Blue Beard." A young woman marries a rich widower, a nobleman, who gives her free reign of her new home, except for a single, forbidden room—to which he nevertheless provides a key. What horrors lurk within will reveal the women this man has loved before and the bloody secrets he has kept about them. Carter does unholy justice to the ur-story of domestic violence even as she manages to write her young protagonist's way out of it. 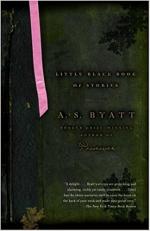 Dame Antonia Susan Duffy, aka A. S. Byatt, is best known for her Booker Prize-winning novel Possession, a realist masterwork of meta-academia. But her short work tends toward the fantastic, and her Little Black Book of Stories contains some of her best.

In "The Thing in the Forest," Penny and Primrose, two little girls who've been evacuated from an area under attack during wartime, find themselves housed for the night with a group of kids in a historic estate—and in the forest out back, they glimpse something that bears as much resemblance to a traditional dragon as the creature at the center of Pan's Labyrinth bears to the BFG.

As The Guardian says, "this is its English incarnation, and it is…no story-book monster. It trails not just 'obliteration and destruction' after it but bits of dishcloth and old pan-scrubber and it claims, as sacrifice, the rest of the story and the rest of their lives, in a story about the very nature of story, what it does and what it's for." Cal it a meta-fairy tale. 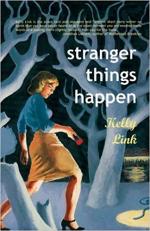 No writer is more synonymous with literary fantasy today than Kelly Link, one of the few bona fide speculative authors (both a Nebula and World Fantasy winner) whose work is regularly taught in MFA programs. Link's fans include Jonathan Lethem, Michael Chabon, Audrey Niffenegger, and Alice Sebold—and if you count yourself among them, may I suggest you check out Link's small press, Small Beer, which publishes books in much the same (strange, funny, genre-bending) vein.

"Stone Animals"— from her debut collection, Stranger Things Happen—is a masterwork of weirdness, cleverly disguised as a domestic drama. A young family falls in love with a house and moves in; but, of course, this house is not quite what it seems, and neither is this family. Of the story, Electric Literature says, "'Stone Animals' is thick with meaning—psychoanalytically inclined readers can have a field day—yet resistant to simple interpretation. The story transforms as you look at it, in the same way that Link’s fiction expertly moves between genres and resists simple forms." 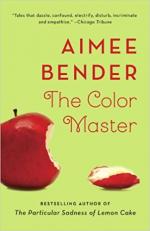 4. "The Color Master" by Aimee Bender

"The Color Master" is from Bender's latest collection, of the same name. In this story, a master dyemaker and her team are hired to create superlative attire for the royal family, with clothing the color of rocks, the moon, the sun, and finally, the sky—this last a dress for the wedding of the princess to her father, who, after the death of his wife, has demanded her hand in marriage.

The story is based on the Charles Perrault fairy tale "Donkeyskin," an ur-story of incest, and Bender gives it its feminist due, no less than Carter did "Blue Beard." "Put anger in the dress," the Color Master tells her young apprentice. "Got it?" 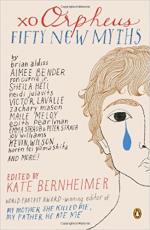 5. "The Punk's Bride" by Kate Bernheimer

While all of these authors have had an outsized influence on the modern fairy tale, no one has done more for it than Kate Bernheimer, the fairy godmother of the form. The author of six books for adults and three books for children, Bernheimer has also edited four collections of retold fairy tales and myths. She is the author of the definitive guide to the fairy tale form and freely distributes pearls of wisdom on Twitter as @fairytaleprof.

"The Punk's Bride" is an "imitation" (a term borrowed from Carter, who did not do "retellings") of a tale called "The Hare's Bride," in which a girl falls for a rabbit and nothing goes well at all. In Bernheimer's version, it's a punk the girl falls for, and the results are just as disappointing, or spectacular, depending on how you look at it.

Of the story, written especially for The Masters Review, Bernheimer says, "Fiction is my way of doing punk rock: I can’t sing, so I do fairy tales—generally weird, sad, and violent ones. I love fairy tales and I love punk music, so I feel sorry that the musicians in this story come out looking bad, but the truth is, no one comes out looking so great." Thanks, Prof. 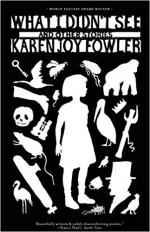 While the authors I've included so far are generally synonymous with literary fabulism, Fowler is best known for her NYT-bestseller The Jane Austen Book Club, and more recently, We Are All Completely Beside Ourselves, which won the 2014 PEN/Faulkner, both of which are realist works.

In Fowler's short story collection What I Didn't See, the author makes it clear that there's absolutely nothing she can't do, from historical fiction involving John Wilkes Booth, to a sweet little tale set in a Northern Cali cult, to a surreal story involving a sadistic juvenile treatment center director. My favorite story, "The Dark," mashes up, in brilliant style, A) feral children; B) top-secret CIA experiments; C) the plague; D) the Vietnam War; and E) the Pied Piper of Hamlin. You really have to read it to believe it.

All right, now it's your turn. What other authors, and what other stories, belong on this list? And why?

Thanks for this! I love all things Aimee Bender. I'm putting all of these on my reading list!

Susan DeFreitas from Portland, OR is reading Your Heart Is a Muscle the Size of Your Fist by Sunil Yapa November 8, 2017 - 3:27pm