Storyville: Adding Diversity to Your Fiction

This is a difficult subject to talk about, diversity in fiction, especially coming from a straight, white male, a place of privilege, but I’m going to do my best to give you some advice here on how to make your stories more diverse. I struggle with it as well, but am constantly trying to not only publish more diverse fiction, but write it as well.

In my Advanced Creative Writing Workshop last night we were talking about this very subject, and how an author handled diversity in his story. I’m talking about “Three Bodies of Mitanni” by Seth Dickinson (who, as far as I know is a straight, white male). This story was originally published in Analog, and we were reading it in The Best American Science Fiction and Fantasy (2016), edited by Karen Joy Fowler (series editor, John Joseph Adams). I think this story might be an ideal place to jump into this discussion precisely because Seth is not an author of color, not a minority, so he may be able to enlighten us as far as how to handle some of these situations.

In this story, we have a trio of explorers who are traveling in virtual bodies in a spaceship, checking up on seedship colonies, to see how the growth is going. They run across Mittani, which they are concerned may be a Duong-Watts malignancy (that’s a bad thing) and they debate eliminating the planet. (Basically, it’s a slave state, but beyond that, a dangerous existence that not only persists, but threatens to take over the galaxy. It’s complicated, read the story for more information.)

You’re weaving a tapestry that is rich, deep, and interesting by including a wide range of characters.

One of the things I love about F/SF in general is the ability to create original names. You don’t have to limit your story to Jim and Bob and Jennifer and Carol, right? I’m always asking my authors to find ways to be more original, more unique, and that’s an easy one to start with, I think. The three experts are named Anyahera, Thienne, and Shinobu. Right there, that’s starting off with something different.

Over time we discover that Anyahera is a blend of Maori and Russian, Thienne is Haitian, and Shinobu—well, we never get the race, but we do get some physical descriptions, and the androgynous state Shinobu chooses to inhabit. More on that in a second. So, while Anyahera may exhibit some traits of what we might think of as being Russian (cold, calculating, precise) it’s actually Thienne who chooses to live in a cold, neutral space, her living quarters. We do get a reference to Thienne being “dark,” but beyond that, Dickinson doesn’t focus on their skin. It’s much more about their personalities, their love for each other, and their job. And that’s how it should be handled, right? If there isn’t a default “white” personality, why should there be a default personality for any other race? Just treat them like anybody else, and develop the personality based on who they are. Sounds simple, right?

Another way that Dickinson shows diversity is in the sexual orientation of the three. There are three people chosen for this assignment, so that there will never be a tie. In fact, Shinobu is chosen because of their ability to be a tie-breaker, a personality described as deliberate and centered. While Anyahera and Thienne are female, Shinobu is only described as androgynous. In our discussion in class we talked about whether we felt Shinobu was male or female, when first reading about them. Many of us, myself included, defaulted to male, for a few reasons—the author is male, we the readers were male (some of us), the name felt male (to me it made me think about a ninja warrior), and because the other two were female. All valid reasons, but also, all incorrect. When we talk about how much writing is by straight, white males and how we as readers often default to this, this was an example of that. The three cosmonauts are also lovers, this triad, and there is a powerful scene in which we see a brief encounter about how that is handled:

“If whatever happened on Mittani is what it takes to survive in the long run, isn’t that better than a dead cosmos?”

I didn’t know what to say to that. It made me feel suddenly and terrible alone. The way Anyahera might have felt when we voted against her [NOTE: On Jotunheim, another planet they thought might be Duong-Watts).

I kissed her. She took the distraction, answered it, turned us both away from the window and down to the couch. “Tell me what to be,” I said, wanting to offer her something, to make a part of the Universe warm for her. This was my choice: to choose.

“A woman,” she said, when she had breath. “A woman this time, please…”

It’s a delicate subject handled well here, I think, and what’s important here is that we see the relationship handled in a way that is essentially just like any other sexual relationship—straight, gay, etc. It’s always about love, about wanting somebody, and needing to be seen, to be valued, and that physical, emotional, and spiritual connection. 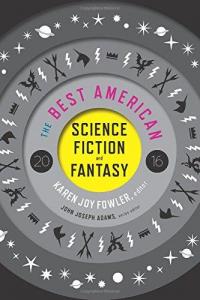 I think one thing authors may struggle with in showing diversity in fiction is how people speak. I tend to avoid accents, and I certainly don’t use Ebonics. Did you notice how Shinobu and Thienne spoke to each other? Like people, right? There is no need to frame any of this discussion in anything other than straightforward English. There is no Russian accent in this story, no Haitian accent. In the future, can you see how these voices might sound? I’ll give you a hint here—it’s the same thing right now. Obviously if you speak a language other than English and want to utilize words, phrases, or an accent, that’s your call and I’d base that on your confidence. If you are French, and the protagonist is French, you can probably handle a bit of the language sprinkled in, with authority. If you’re not French, or German, or Japanese? Maybe not. Your call. Just do your research, and proceed with caution. What I would avoid is championing a cause or race as that protagonist if you aren’t in a position to speak from a place of authority (see Rachel Dolezal). Don’t appropriate or misrepresent who you are (see Michael Derrick publishing poetry under the name and identity of Yi-Fen Chou).

I can remember editing a story for Usman T. Malik in Exigencies, and we had a discussion about how to handle the words that weren’t English. I’ve always thought that they should be in italics, at least the first time we see a word. But there’s a trend, going back a few years now, where NONE of the words are in italics. And that’s what Usman asked for; and I was happy to honor that. I now ask all of my authors how THEY want to handle it, when publishing them. The same with sexual orientation, such as a story I published at Gamut, “Nava” by S.B Divya. We ended up going with Spivak, not “it” as originally written, when Divya discovered that using “it” was insulting when referring to a gender-neutral character in fiction. Now it reads as “e” “er” and “eir.” Ultimately, I try to do what is right, while also honoring what the author wants. I learned a lot in both cases here.

One of the keys here, I think, is not representing any minority character as “the other.” What do I mean by that? Well, basically that you’re showing that diversity is not a normal part of society, the world you are building, and the story you are telling, but as something else—foreign, alien, negative, less, suspicious, tainted, etc. As you can see from some of the examples I’ve given with “Three Bodies of Mitanni,” none of these characters are called out as odd or strange—appearance, sexual orientation, name, culture, history, etc. They are simply human (or whatever alien race you’re working on) and they exist as they are as part of a complicated, layered, and diverse culture—and an evolved one.

I know this is only the tip of the iceberg here, and I could probably talk about this for thousands of words. And to be honest, I may not even be the right person to talk about diversity in fiction, since I am a straight, white male. BUT, I’m talking about this here, because I’m working on including more diversity in my own fiction, and I encourage you to do the same. Read globally, read across genre, read authors of color, and different sexual orientations, and identities, and find ways to be more original, and diverse in your storytelling. If you’re uncertain about what you’re doing, bounce your story off a friend that may have more experience and authority. I’ve done that in the past when writing stories from a female point of view. I think in the end you’ll find that you’re weaving a tapestry that is rich, deep, and interesting by including a wide range of characters. Good luck.

I like Hubert Selby Jr.'s approach to character naming. All his protagonists were Harry. Once you find that perfect name, you stick with it. Harry. Harry!