This week, we’ve decided to speak to some crime, mystery, and thriller publications—magazines and journals that tap into noir, that build suspense on the page, one dirty deed after another. First up is Needle, a slick little rag that has eluded me for a few years now, but is still one of my favorites out there—they just got some stories into the Best American Mystery Stories anthology, so you know they’re doing it right. Second, is Thuglit, who have published some of the hottest names in noir and neo-noir. And third, is a relative newcomer, The Big Click, run by some top-notch authors, and emerging as a must-read website. So, take a look, see what they have to say, and then send them some work!

NOTE: All statistics come from Duotrope.com and should NOT be considered 100% accurate for a variety of reasons. Check guidelines at each publication to be sure. 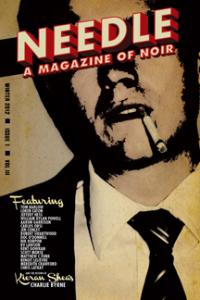 What makes a story a “Needle” story?

The best stories are those that need telling, that exist for a reason. The stories we like have a compelling voice and a reason to care about the characters. We like stories with a bit of an edge, as well. Too often we’ll see a perfectly competent story that doesn’t just take it to that next gear. You know, like a piece of cake someone gives you and you say, “Yeah. This is fine. Good. Thanks.” You’re not thinking about that cake the next day. We want stories that make you tell people about the cake you had, make you sit there, dumbfounded, thinking, “Shit, what was that? Nutmeg? Who the hell puts nutmeg in a cake like this? Wow.”

We’ve recently accepted some great work from William Boyle, Christopher Irvin, and Jen Conley. The Heath Lowrance story we took, “Five Bucks Buys Some Goddamn Vodka,” was our kind of story in that it has its own momentum and voice. The story itself was clear and clean and had a reason to exist.

It’s kind of like Art Garfunkel. I don’t know how to describe him, but I would know him if I saw him. I’d like to see a story that shows competence, yet surprises the heck out of me. Something challenging for reader and writer.

Be proud of the work you’ve done. Writing a story is tough, so take it seriously. Follow the submission guidelines and formats. Too often we get a submission that is poorly formatted or not proofread. Messing up “there” and “their” once isn’t going to be enough to have your story dumped, but it’s just one more thing you shouldn’t have to worry about. Every typo, every grammatical error is one more chance for a reader to dismiss your story. 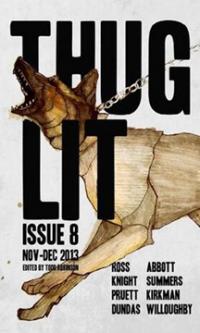 What makes a story a “Thuglit” story?

Don't have an answer for that. (Great way to start an interview, huh?) Sometimes, sheer storytelling originality will drive a story from word one. Others are driven by character. If it's good enough, it's good enough. We never know until we read it. There's a patchwork element to Thuglit—an Island of Misfit Toys aspect, if you will. We like having different styles/stories in every issue. We don't even have a cover style that's consistent.

A mistake I see/hear all the time is when a writer tells me that they think they have an idea for the "perfect Thuglit story." There is no such thing. WE don't define that, so how can you? We're a little looser on restricting sex/language/violence, so some writers think that those are the elements we're seeking. They're not.

I love all my thugbabies. I'm equally impressed by everyone's effort. Some stories catch me at the onset, then while editing, I realize the flaws. Others have a slow burn. Then, months later, I'll realize the story is still with me after not necessarily setting my world on fire the moment I read it.

Every so often, I'll see some theme pop up randomly in differing stories. The zeitgeist is strange like that. Just in this last batch of submissions, we received THREE stories featuring "death by snake." Last year we had FIVE stories (three made it to final cut) with a shallow grave burial submitted in a month.

The most common tropes are: Italian Mafia, hitmen, and meth. That's not to say we don't go with stories featuring those themes. We do crime fiction. There are only so many crimes and so many ways to commit those crimes. Five years ago, every other story was a serial killer.

I'm afraid to answer that question. That'll get me a dozen stories centered around whatever I say. Another mag used to do theme issues. Every couple of months, I'd get flooded with whatever they'd rejected—and several of them might be good. Then it's hard to pick a favorite amongst similarly themed stories.

Read as much as you can. See what's out there, what's been done already.

I'm also a big fan of the "Third Choice" rule for my own writing. Never go with your first instinct. That's the obvious choice.

What's your second thought? Scrap it.

Most people really have to think hard about the third option, but that usually makes it the freshest. Example: I was talking to a writer about his Italian Mafia story. As I said earlier, it's a bit overdone. His second thought was to make them Russian. Better, but still used a lot. His third thought was the Korean mob in K-Town. Boom. Never seen a story in that setting. 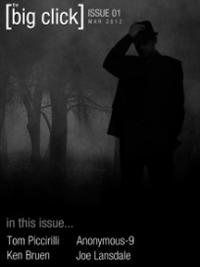 A story about a crime or social trespass that doesn’t lean very heavily on the visual cues of “noir,” and that is also not a straightforward mystery.

We published, “Welcome to the Family” by Francis Setnocis, a new writer, recently. The interesting thing is that it read almost exactly like mid-20th century women’s fiction of the sort that used to be in slick magazines, but there’s this undercurrent of menace that chugs toward overkill—how many ways can you poison one person, after all!—and then just stops short as the first bite is about to be taken. It was like finding a previously uncollected Shirley Jackson story in an old magazine.

1. Drunken man angry at his woman, so he jerks off (literally, we got a stretch of three or four of these in a row), brandishes a firearm, and then something terrible happens.

4. Stories where the last line is either in the title or the first paragraph.

5. Stories that try to be radical by showing off some “extreme” subculture—drug lifestyles, S&M, whatever—but end up with a very conservative message about the bad people getting their comeuppance.

6. Science fiction mysteries. Because most of the staff is involved in science fiction, we get a lot of science fiction about a robot detective or a zombie cop or stuff like that. The closest we’ll come to SF is near-future stuff like Ann Sterzinger’s “You Are Watching,” which we ran a few months ago.

Someone who gets away with something awful, and is joyful about it.

Be ambitious, and be disciplined. Don’t get into books and stories as a way to get the attention of Hollywood. Don’t put the word “Author” in your Facebook or Twitter handle.

A Conversation With Todd Robinson About France, Gay Characters in Crime Fiction, and His New Novel 'Rough Trade'

I'll second. These have been a great addition to the Storyville column and I hope they'll continue, frequently revisiting genres as well. A great resource for writers of all levels (and editors as well, I'd imagine).  Good stuff, Richard.