If you think the only hook to your story or novel is the first line, then boy do I have some news for you. In order to engage the reader you need to hook them not just once, but as many times as you can, so there is no way they can escape. How do you do that? It starts with the title, and then expands to the first line, the first paragraph, the first page, the first scene, and the first chapter (if writing a novel). Let’s get into this, so we can figure out how best to hook YOUR readers, no matter what genre or style you might have.

That’s right, it all starts with the title. And yes, I’m quite aware that my first three novels were titled Transubstantiate, Disintegration, and Breaker. (At least it wasn’t It.) But my short story collections were a bit more interesting—Herniated Roots, Staring Into the Abyss, Tribulations, and Spontaneous Human Combustion (out on 2/22/22 with Turner Publishing). Let me unpack these titles a little bit before I move onto short stories

And as far as my short story titles, what are some of my favorites? I have a few:

So you can see how the title is supposed to hint at what’s coming without giving it all away. It’s the tip of the spear, shoved into the tip of the iceberg. It’s the very first thing people read—so have fun with it, be clever, and see where it might go.

This is where most people think the story or novel starts. And it really is pretty important. You can look at Fahrenheit 451, with “It was a pleasure to burn,” or Stephen King’s first book in The Dark Tower series, The Gunslinger, which begins, “The man in black fled across the desert, and the gunslinger followed.” This line, the first line, should set the tone, hint at the internal and external conflicts, and help to create a sense of urgency and stakes. Look at your stories and novels, hell, pick up your favorite short story or collection or novel and see how the experts do it. It’s definitely something you have to work on, it takes practice, and not everyone is good at it. I’ll list a few of mine below:

Some of you may be paragraph hookers (yes, that’s a thing), and that’s okay, because while the title and first line are important, the first two hooks, the supporting paragraph can either be the hook or it can expand upon the first line to build out your story. Whatever you put in the first paragraph, it better be important. By showing this to us, you are SAYING that it’s important, “Hey, look here, this is first, this is crucial.” So make sure that’s true. Here are a couple of my paragraph hooks—openings that may have a good first line, but really are trying to grab you with what the first couple of lines set up here.

What you do with the first page of your story or novel is crucial to keeping your reader’s attention. You have hooked us with the title, first line, and first paragraph, and now you must go deeper. You want to further establish both the internal and external conflicts, you want to build this world you have created (especially if it’s entirely made up, like in fantasy), you want to set things in motion, show us how this is all part of the inciting incident (that moment in time after which things will never be the same). You need to start increasing the tension, show us the stakes and sense of urgency that belies this opening. You need to go deeper into the setting, so you can ground this narrative, while showing your main character/s, using sensory detail to enhance the mood. Whatever threads you started, you need to continue. 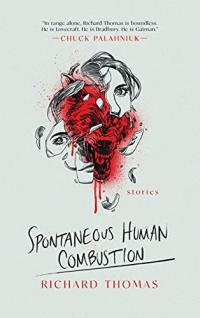 Now, your short story may not even have more than one scene. My tale, “Undone,” is 1,501 words, and it’s one sentence, so there are no scene breaks. But I assume that most of your stories will have multiples scenes—maybe as few as three, or as many as ten—it’s really up to you; it depends on the genre and voice of your story. And if you are writing a novel, maybe you will only have chapters, so there might not be any scene breaks within each chapter, but then again, maybe there will. My current novel in progress is entitled Incarnate, and there are three acts, with each act consisting of six chapters, and each chapter has about three or four scene breaks (typically), adding up to about 4,000 words per chapter. But what you want to think about with the first scene is all of the Freytag stuff you’re doing on a larger scale with the entire story (or novel). You want to hook us, set this up, address the conflicts, and then increase the tension, building to a smaller climax, where something needs to change and/or be revealed, keeping the pages turning, as we set up the next scene. It’s not easy.

For those working on a book, each chapter is an organized collection of elements, that’s why it’s a chapter. Maybe it’s a long drive out into the country to visit a haunted house—one chapter. Maybe it’s the origin story of a monstrous beast—one chapter. Maybe it’s showing how your protagonist does his thing—magic, or ritual, or dark act—unpacked in great detail over several thousand words. Maybe your journey is across the country, and each chapter is a day. Maybe it’s a shifting POV, your novel having several different main characters, each with their own story and perspective. However you organize it, you want to hook us, build it up, and then end each chapter with a BANG. I can’t think of a better example for the ins and outs of chapters than Josh Malerman’s Bird Box. He is the master of transition, revealing secrets at the end of each chapter, dropping bombs, and then shifting over to the alternate timeline, as we wait to see how these two narratives will come crashing together in the end.

So when it comes to your story, or novel, find a way to connect your title, your first line (grabbing us from the jump), as you expand your key elements across the first paragraph, those elements essential to the narrative. No red herrings here! And then across the first page, build out your world, ground your story, show us your character/s, and help us to create the atmosphere of your genre and tale. Continue that all the way through your first scene, and if you have a book, the first chapter. With stories, it’s crucial to grab us and never let go, knowing you may only have 5,000 words to tell your story (or less). For books, understand that agents and presses quite often are looking only at the first few pages—maybe ten, maybe fifty—and trying to decide if they want to keep reading, or sign you. They are looking for reasons to say yes, but they are also looking for reasons to say no. Don’t let them find that negative response—hook them with every trick and emotion and compelling image you can find—and then never let them go. Your workshop cohorts, your peers, your readers, an agent, and a press—they all want to be hooked, so make sure it’s a big, nasty multi-pronged bastard that plunges deep into their flesh.

Get Spontaneous Human Combustion at Bookshop or Amazon