When I heard the news of LitReactor Co-Founder Kirk Clawes passing away, it really floored me. It totally caught me off guard, as death often does. I held up the pottery of his I had sitting on my desk, admiring his ability—the art, the vision, the craft. It got me thinking about my own work, my own life, as I am about to turn 50 (and will have when this column comes out).

When Kirk talked about his pottery—the artwork he spun out of clay—his eyes lit up. When I saw the heart and expression in his creations, all lined up on shelves, sitting on tables at the last holiday gathering of his I attended—I saw so much creativity and passion and talent.

So, what are you waiting for? Are you living the dream? Are you writing the stories you want to write? Are you sending them out? Are you getting published and making money?

If not, I want you to go stand in front of a mirror and ask yourself, “WHY NOT?” And really think about it. Do you want this? If so, what are you actually doing to make it happen?

I remember coming out of the movie theater after seeing Fight Club back in 1999 or 2000. Something about it really spoke to me. I looked it up online, and found out that Chuck Palahniuk wrote the book, and that he had other work out there—which I promptly read—Choke, Survivor, Diary, Lullaby, etc. It woke me up. I was thirty-five years old. I had a fairly unsatisfying career in advertising as an art director and graphic designer. I was unhappy.

Something in my life was missing. Writing. Does this sound at all familiar?

Something in my life was missing.

Does this sound at all familiar? Not yet? Soon, maybe.

Because I was hanging out at Chuck’s website, when I saw there were writing classes to take, I decided to sign up for one. So consider this the first voice in a chorus:

Take classes, so you can study, and hone your craft.

So that’s what I did. First with Craig Clevenger, and then Monica Drake, and then Max Barry. Later, I’d study under Jack Ketchum. I had no idea if I could still write. Everything I’d ever written in high school and college was CRAP. Horrible.

But I had the desire to try again.

After Craig’s class (which I loved) I had maybe seven stories. When I look back now, some are pretty bad, but most ended up getting published, including, “Stillness” at Cemetery Dance in the Shivers VI anthology, alongside Stephen King and Peter Straub. I cried. It was surreal, being a lifelong fan of them both. It encouraged me to keep going.

But how do you balance it all? We have lives, we have relationships, we have families.

Here’s a cold, hard, truth—you’re making excuses. If you want to write (or do anything in life, creative or otherwise) you will find the time. You will MAKE the time. But you have to want it—you must have the desire, the courage, and the perseverance.

That chorus continues. I stopped doing SO many things in order to write. The biggest one was drinking. I had a problem, and I needed to stop. So I did. (13 years sober!) And that not only freed up a huge chunk of my time (and money), but also allowed me to clear my head. No more hangovers and lost days, either.

What’s holding you back?

I wrote my first novel, Transubstantiate, 700 words at a time, on my lunch hour. I closed my office door, and typed for an hour. Sometimes I made it to 1,000 words. Each day was a different character—and I loved it. In a few months I had a book. 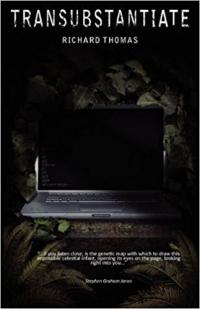 I’ve worked really hard over the past ten years to try and shift my work from 70% advertising and 30% writing, to 70% writing and 30% advertising. This year I only worked 14 weeks as a graphic designer. The rest? Writing, editing, teaching, and publishing. I’m still not 100% there as far as being a “full-time” writer, but I do work for myself. I’m sitting at home right now, it’s 2:23 PM on a Friday, and I’ve spent the day teaching a class at Lit Reactor, editing stories for my other classes (Contemporary Dark Fiction and my Advanced Creative Writing Workshop) as well as other clients (stories, novels, etc.). I spent some time putting together the December issue of Gamut. But it’s taken ten years of hard work to get here. I wish I’d started sooner.

So I ended up taking several classes. I also decided to get an MFA. Along the way I read the four books that I recommend the most as far as craft—On Writing by Stephen King; Wonderbook by Jeff VanderMeer; Writing 21st Century Fiction by Donald Maass; and the latest, Thrill Me by Benjamin Percy. They all taught me something.

In order to write, you have to read.

Some guy named King said that. Many others have as well.

Understand your genre, and the masters, as well as your contemporaries, by reading those classic novels, those collected stories, and the “best of the year” anthologies, as well as every magazine you want to be in—hop to it. It’s important. How can you subvert expectations if you don’t know what they are? How can you understand what the top editors want, if you don’t read the stories that are recognized and winning awards? Places like Tor, Nightmare, F&SF, Clarkesworld, Apex, Pantheon, Shimmer, Black Static, Cemetery Dance, and The Dark. Publishers like ChiZine, Crystal Lake, Written Backwards, and the aforementioned Tor, Apex and CD.

It’s up to you. Stay an extra hour at work and close the door. Set up an office in the basement, or section off part of your house (like I did). Go up to the cabin you own (or borrow one from a friend) and write. Write your ass off, and don’t look back.

Life is too short to not go after your dreams. Don’t quit the day job just yet, but do carve out some creative time. Listen to those around you that have done it before, are doing it now, people that you respect and admire. In the moment of creation, in the place where you are creating entire worlds out of thin air, where you are (as Chuck put it), “Teaching us something, making us laugh, and breaking out hearts,” pour yourself out onto the page. Let us see the blood, sweat, and tears. Write with authority about times you have suffered, showing the world that you understand, you’ve been there, and this is how we get through it.

Don’t put off until tomorrow what you can do today.

There may not BE a tomorrow.

Five Tools for the Journeyman Writer

Dying on the Mountain: How Goals Will Kill You and How to Focus on the Process

Dino Parenti from Los Angeles is reading Everything He Gets His Hands On November 22, 2017 - 9:14am

Happy Birthday, Richard. Thank you for this...I've been freaking out over work stuff and telling myself why I can't do this writing thing...but I can and I will keep going. Thank you!