In the wake of all of the Fifty Shades of Grey hype and criticism, I thought I’d make a list of ten BETTER sexual influences for writers. These are books, stories, authors and films that I think will give you a much better grasp of how to write sex scenes—the power struggles, the deviations, and the actual physical interaction. Hope this helps. 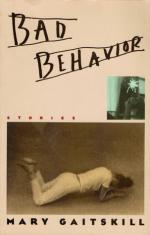 I’ll first of all say, just read Mary Gaitskill in general. But more specifically, read Bad Behavior. What she does with her stories is not only take us to some very interesting places, sexually speaking, but she does so in a variety of ways. She shows how we have power, how we relinquish it, and how we submit to others. So many of her stories have been reprinted, studied, and held up as an example of how to write about sex, how to write about bondage and submission, and everything in-between. And it’s not without humor, either.  She gives us these lives in detail, so that we care about her protagonists, and quickly find ourselves disappearing into the tense and alluring narrative. One of her best-known stories in this collection is, “Secretary.” (See the next listing.)

From, “A Romantic Weekend”:

She was delicately morbid in all her gestures, sensitive, arrogant, vulnerable to flattery. She veered between extravagant outbursts of opinion and sudden, uncertain halts, during which she seemed to look to him for approval. She was in love with the idea of intelligence, and she overestimated her own. Her sense of the world, though she presented it aggressively, could be, he sensed, snatched out from under her with little or no trouble. She said, "I hope you are a savage." 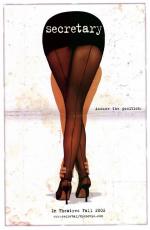 Rarely do I see a film that does a better job than the story or novel, but in this case, it might be true. Starring James Spader and Maggie Gyllenhaal (perfect casting, in my opinion) Secretary allows us to wallow in the imagery of the story. The innocent beginning—a young girl, Lee (Gyllenhaal) recently released from a mental hospital who takes a job with a demanding lawyer, Mr. Grey (Spader). The slow tease, the sexual tension, her awakening, and subsequent evolution—this is how you do it, how you show power and surrender, the slow build from denial to interest to climax. It’s a pretty faithful adaptation of the short story, and both are worth enjoying. This is Lee speaking:

Each cut, each scar, each burn, a different mood or time. I told him what the first one was, told him where the second one came from. I remembered them all. And for the first time in my life I felt beautiful. Finally part of the earth. I touched the soil and he loved me back. 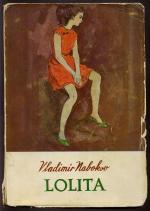 A controversial novel, Lolita by Vladimir Nabokov, is about a 38-year-old man, Humbert Humbert, who is infatuated with a 12-year-old girl, Delores (who he calls “Lolita,”). Her name has evolved in pop culture to essentially define a sexually precocious girl. On all kinds of “best of” lists as far as erotic content and literary writing, while this novel definitely strays from the norm, the lyrical passages cannot be denied, and as with other controversial works such as Tampa by Alissa Nutting, and The End of Alice by A.M. Homes, there is a lot to learn here, if you have the courage and stomach to continue reading. Such a famous passage here:

Lolita, light of my life, fire of my loins. My sin, my soul. Lo-lee-ta: the tip of the tongue taking a trip of three steps down the palate to tap, at three, on the teeth. Lo. Lee. Ta. She was Lo, plain Lo, in the morning, standing four feet ten in one sock. She was Lola in slacks. She was Dolly at school. She was Dolores on the dotted line. 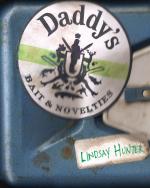 “THE FENCE” by Lindsay Hunter

One of my favorite stories by Lindsay Hunter is, “The Fence,” which was collected in Daddy’s. Hunter is one of my favorite voices, and she isn’t afraid to get dark, to get sexual in her content. What I love about this particular story, about a young woman that puts a dog’s shock collar between her legs as she walks towards the invisible fence line, searching for a way to feel, is that while the erotic aspects are certainly present, it’s about the woman behind the desire, the need she has, the vacancy, the urgency in her voice, her thoughts, her solitary life. Her husband is oblivious to her ever-escalating and risky behavior, eventually removing the fence because he feels they don’t need it, that the dog has learned to stay inside the property. The desperation and loneliness at the end, in the final paragraph, is just heartbreaking:

I put his water dish in the suds and cleaned that, too, and then I went upstairs and lay on our bed and wept until my ribs were sore. I went into our bathroom and straddled the edge of the tub, and it felt good to have something hard and cold there, but not nearly good enough. 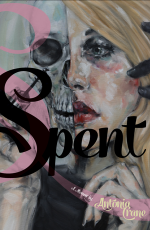 What better way to learn about all aspects of sex than to read a memoir about a woman, Antonia Crane, who worked in the industry—as a stripper, primarily, but also hiring herself out for private clients, as a prostitute? In her memoir, Spent, she shows us so many different angles, the way that she began her career as a stripper, how she found herself in a hotel hooking—the drugs, the johns, her dying mother, and her own constantly changing desires. When we write about sex in literature, so little of the actual story (or novel) is spent (pun intended) on the bumping and grinding. Sure, those elements are important, and there are plenty of examples listed here already, but when you can get the audience to care about your protagonists, to root for people like Antonia, the emotion goes so much deeper. 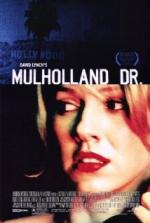 As a huge David Lynch fan, I knew Mulholland Dr. would be strange and compelling. There is a scene in this film between Naomi Watts and Laura Harring that is very hot. By taking the innocence of Watts, in pink pajamas, and pairing it with the authority and confidence of Harring, who climbs into bed entirely naked, there is a great deal of tension. The dimly lit bedroom, the intimacy, the unreliable narrators—it’s a layered scene that delivers on all levels. Also see, Blue Velvet—the Isabella Rossellini, Kyle MacLachlan, and Dennis Hopper scene for something much darker (“MOMMY!”). 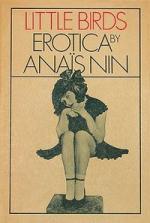 When it comes to erotica, one of the first names that pops into my head is Anais Nin. Little Birds is the title that often comes up, as well as Delta of Venus. Her diaries are also mentioned as must-read material. She lived a bohemian life, often paired with Henry Miller, and rumors of incest with her father have been documented (if thinly veiled) in House of Incest. See also Henry Miller’s, Tropic of Cancer. Don’t expect Hustler or contemporary pornography here. While not all of her writing works for me, and I haven’t read her extensively, there are definitely some steamy moments, some lyrical passages. Take this from “Elena” in Delta of Venus:

When she closed her eyes she felt he had many hands, which touched her everywhere, and many mouths, which passed so swiftly over her, and with a wolflike sharpness, his teeth sank into her fleshiest parts. Naked now, he lay his full length over her. She enjoyed his weight on her, enjoyed being crushed under his body. She wanted him soldered to her, from mouth to feet. Shivers passed through her body. 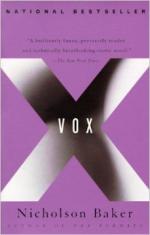 So often we look at dialogue in erotic passages, the words we use when we talk to each other, dirty and otherwise, and laugh. The descriptions of body parts can easily break you out of a tense, arousing moment—something Baker does here to get a laugh, but this book is not without its heat. Vox by Nicholson Baker is entirely told in dialogue, which if nothing else, will really give you a lesson on how to carry on a conversation, how to handle phone sex, and other ways we speak to each other. You’ll love this or hate this—it’s a polarizing novel. Also see The Fermata. This excerpt is Abby talking about her new apartment, and why she called the phone line: 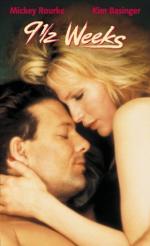 Maybe for me it was the fact that this film was one of the first erotic movies I ever saw. Maybe it was the whole scene by the refrigerator. Maybe I had a thing for Kim Bassinger, and just liked seeing her surrender to Mickey Rourke—who knows. But this movie is one that has stayed with me for a long time. 9 ½ Weeks showed me that you could have fun, be playful, but also, that you could give yourself over to somebody entirely, how that tension of trust might work, and how exciting that could be. I know it came out a long time ago (1986) and may feel a bit dated in parts, but there’s a lot to learn from this film—the power struggle, the handing off of that baton, the trust, the lies—that can be put into your fiction. 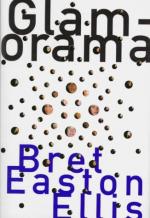 Storyville: The Symbolism of the Four Seasons

Storyville: How Grateful, Compassionate Protagonists Can Add Depth to Your Fiction

I loved Vox and Fermata by Baker.  Both are worth reading along with the mary Gaitskill.  Thanks for more suggestions.