The writing convention. That weekend gathering where writers emerge from their offices, bedrooms, pillow forts, and crypts and spend several hundred dollars to socialize with other writers and try to improve their writing skills. Some of them might even be hoping to make it big by getting an agent or editor to notice them — either by talking them up at the bar, going to a pitch session, or slipping a manuscript underneath a bathroom stall at an inopportune time.

But many writers, especially those new to the convention game, may be confused as to the best strategy when it comes to approaching such an event. What is the best use of their time? For instance, should they go to panels or hotel parties? How many pitch sessions should they do? What's the best way to engage your favorite writer?

There are several schools of thought when it comes to how much alcohol you should pack in your luggage. The carefully packed 2 bottles of wine and one handle of whiskey vs. the "just go around chugging everyone's abandoned beer." Scholars go to Amsterdam every year to argue the pros and cons of these methods. But, I digress.

Here are some common strategies that I've seen throughout my time attending writing conventions. Feel free to pick and choose amongst your favorites.

You hate the "game" of writing and think it is all a ruse. You think publishing is a scam, but also, you want to be published.

The rock star writer (either deservedly or not) thinks of the writing convention as their personal stage. The rock star writer is actually the reincarnation of the ancient demon Beleth, who only roams the earth once every century. Brilliance like this should not be wasted sitting in a lonely writing office. It should be put on display. They enter every room loudly and with laughter. Rock stars usually have a cadre of people following them, like the common rabble followed Jesus Christ, hoping to glean a piece of wisdom or a catch a glance. They usually won't be seen in pitch sessions or panels. They have better things to do: Like debating hotly about local politics in the smoking area or telling a funny story to enraptured people sitting out in the hallway. The rock star writer almost always has a line out the door during their autograph session. If they don't, they feel they should. Beleth demands sacrifices, after all. You're not just a bright light. You're the whole disco ball.

This approach may be best if you hate people and socializing, probably because of some unresolved trauma in your early life. You hate the "game" of writing and think it is all a ruse. You think publishing is a scam, but also, you want to be published. You probably self-identify as a nihilist and if not, you're probably just too tired to self-identify as anything. Nevertheless, you persist, and have managed to drag your carcass to a writing convention despite knowing you'll be surrounded by rubes, sheep, and idiots. Maybe you'll find a hot goth girl with a nose piercing at the bar who'll look at you wide-eyed as you recount your tales of undeservedly getting rejection letters on your latest masterpiece about a catman in Tokyo who has to get a job waiting tables after a lifetime in the wilderness practicing clawmanship. You probably won't, but you can dream about it. Either way, it would only be a momentary distraction from the sun-sucking meaninglessness that surrounds you.

Pros: Protects you from the harm of criticism.
Cons: You're kind of a bummer.

The 'In Vino Veritas' Approach

This method is simple: In wine is truth. Writers are supposed to speak the truth. Therefore, just be completely wasted the whole convention. All good writers are secretly alcoholics, after all. Bring drinks. Buy overpriced $12 hotel drinks. Sip discarded shots. Constantly talk about how drunk you are. Roam from room to room taking wines and beers. Stash the beers in your coat. Might as well bring a flask too. The writing convention isn't a time to act professional. If you wanted to be a professional, you would've become a court reporter or a doctor. No, you are a writer. And this is your time away from the responsibilities of a normal life, from your spouse and kids and your 9 to 5 job. It is time to embody the essence of what it means to have true creative freedom. But maybe drink some water before you go to bed so you won't be sick the rest of the convention.

Pros: Great way to mask a social anxiety disorder.
Cons: You might accidentally throw up on Brian Keene's shoes. 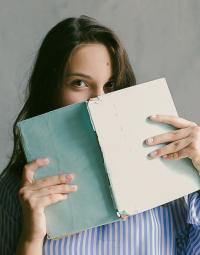 You can be anyone. So you chose to be whatever the people gatekeeping in front of you want you to be. You're polished, well-bred, probably have a $200 haircut from 15 years ago, have a college education that your parents paid for, and none of the kind of traumatic incidents in childhood that make for really juicy biopics. You try to make up your lack of style and discerning taste with congeniality. You sit dutifully and attentively through readings. You take notes. You hand out polished business cards with your gmail address. You have a practiced way of speaking and an easy smile.

The Blank-Faced Mask has an advantage over The Rock Star, In Vinos Veritas, and the Danse Macabre approaches: Your strong personality doesn't overpower everything in the room and demand attention. But you've also probably been working on the same epic fantasy for the last ten years, and you run the risk of writing your fiction in the same way you polish your demeanor: Blank, gentle, unoffensive, and entirely forgettable.

Pros: You're not an asshole.
Cons: Will probably fade into obscurity

Imagine what it would be like, to only laugh at jokes that you find funny.

Simultaneously revel in the freedom and terror that would bring. Like standing naked in the cool wind blowing up from an infinite chasm.

Think of all the writing you could get done in the four days + 1 recovery day you spend at a writing convention. You could also save money by renting out an AirBnB for some of your writing friends and just hanging out instead of shelling out all that money to attend a bunch of panels you'll probably sleep through hungover anyway.

Whichever approach you take, for your next writing convention, you have to remember two things:

Not everyone will like you, and don't expect to get a book deal out of this no matter how charming you are. Understand that, and you just may survive.

The Write Convention is a huge writing convention in the UK. It is one of the biggest publishing events in the country where over a thousand publishing professionals and teachers meet annually to share knowledge, insights and advice. The main purpose of the event is to provide a platform for authors to share information about their craft and help each other to succeed.You can also check https://broadapk.com/tanks-a-lot/ to gain more knowledge about writer. Organising a writing convention is a massive task and one that must be taken seriously. A successful convention for you or your company will be one in which you've generated the required level of positive feedback from your attendees.

When I eventually found testimonies about this spell caster Dr Abiola Efe , how he helped many people to get their lovers and broken homes back, i contacted him through his ) because I was absolutely desperate to get my lover back. Life without my lover was a real mess for me and my children. i wanted a dramatic change and I thought magic could be the solution. After discussing the resolution with Dr Abiola Efe , he gave me hope that he will restore my marriage. I felt confident that he will actually make my lover to return home and he did! It’s fantastic what this great spellcaster have done for me, his help is priceless! I don't know what I would have done without Dr Abiola Efe does his job so well he is organized and highly functional, i believe he is the best spell caster i can count on when it comes to all kinds of spell, I was floored that his spells worked, if you'r need help, contact him on his..WhatsApp him on +2348100609098