Welcome to the monthly tech news round-up. I've got some cool stuff from Shelfie, as well as anything you fellow writers out there might like to know about Apple's newest iPhones and mobile operating system, iOS 10. And finally, there's a bookmarklet I just discovered the other day that allows you to easily turn webpages into ePub books.

There's a fair amount of ground to cover, so let's get started. 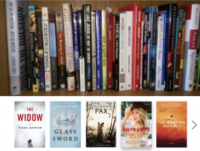 You might remember about a year ago I did a review of this app that scans your physical books and offers you discounted (and sometimes free) eBook equivalents. At the time of that writing, the service had about 80,000 titles in their database to select from. Since then, that number has expanded to 450,000, over five times the initial selection.

In addition to this expansion, Shelfie now offers a Deal Finder option, utilizing an algorithm which is based not on "customers who bought this book also bought," as is the case with Amazon, but rather where other users of the app have placed books on their shelves. Here's a reminder on how Shelfie works, along with some clarification on how Deal Finder works from the company's press release:

Shelfie takes the legwork out of finding deals on eBooks you'll actually enjoy reading. Using the app is simple, you take a snapshot of your bookshelf (a 'shelfie') and the app uses patented computer vision algorithms to automatically catalog your entire library. The Shelfie Deal finder then curates a list of recommended titles based on how you and hundreds of thousands of other readers organize their bookshelves. When Shelfie identifies that a book on your recommended list goes on sale, the app alerts you via email and an in-app notification to buy the book on iBooks.

In short, this is a more personalized way to find deals on eBooks, since basing recommendations solely on purchases isn't exactly accurate when it comes to interest—for instance, if your aunt buys a bunch of eBooks to gift to you, she may have been doing so based on recommendations, but how can we be sure those didn't come from thousands of other aunts out there buying what they think their nieces or nephews are going to like? We can never know...

If you've already downloaded Shelfie in the past, then you're all set to start using Deal Finder. If you haven't downloaded the app yet, you can do so here.

Earlier this month, Apple announced its newest iPhone models. They're slick and pretty, and if you're a photographer, there's plenty to be excited about. As for writers, well, there's nothing especially of note where the hardware is concerned. If you're an iPhone person, this is just the next step up from the device you already use (i.e., it'll be faster and more efficient).

Software-wise, there are a handful of features of note to writers in Apple's iOS 10, which is now available. I already detailed most of those features in last month's round-up, but one more feature—which will also be available in MacOS Sierra—was announced during the company's keynote event: real-time collaboration in Apple's iWork suite (Pages, Keynote, and Numbers). Andrew Liptak of The Verge explains this functionality in more detail:

Groups of users will be able to add text, images, and animations to their documents in real time on the iPad, iPhone and on the web. It also introduces a public and private mode.

So for you writer teams out there, working on a manuscript together in Pages is now a bit more "in the moment," so to speak.

Is this a revolutionary new feature? No, it isn't. Microsoft and Google Docs have been able to do this for quite some time now. But if there's one thing Apple is really good at, it's lifting pre-existing tech and ideas and, admittedly, making them function better (most of the time anyway; just ask f.lux about that one).

Last but not least, I came across this handy bookmarklet the other day. It's been around for a while, but as it was new to me, it'll probably be new to some of you. It's called dotEPUB, and in a nutshell, it easily creates ePub and MOBI (Amazon) files from pages on the web, be it on your smart phone, tablet, or computer. So, say you want to read the latest Stephen Graham Jones novelette "The Night Cyclist" on Tor's site in iBooks or Kindle. First, go to dotEPUB's website and follow the instructions for setting the bookmarklet up. 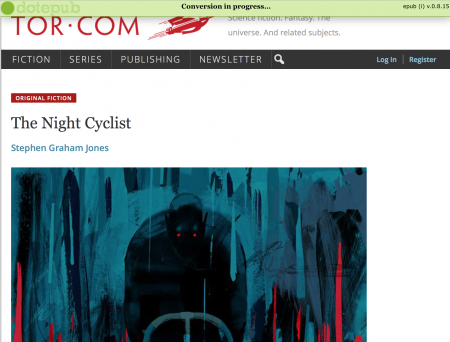 Once that's done, just navigate to the page, tap your bookmark button, click on dotEPUB, and the bookmarklet automatically converts the text into an eBook for your reading convenience. You can then immediately open the file in your eReading app of choice (which is especially convenient if you created the book on your phone/tablet), or you can save to Dropbox for later. Either way, it's pretty dope.

You might remember me mentioning an app that offered a similar function for Kindle, Ascend, back in July. That app has sadly stopped functioning for me, likely because it doesn't play nice with the latest iOS updates. The great thing about dotEPUB is that it can not only create both ePub and MOBI files, but it's a bookmarklet rather than an application, which means it's less likely to run into functionality problems (and it can be used on pretty much any device).

That's about all for this month. I'll be back in October for even more tricks, tips, and updates on any tech news for writers.

One last thing: I mentioned in August (gushed is a more appropriate word) that Scrivener had finally released a mobile version of their awesome word processing software. Keep an eye out for a full review of Scrivener for iOS here at LitReactor next month.

Thanks for the tech crash course. I am always playing catch up just to cut and paste. I appreciated the mention of Scrivener, which I purchased  to work on screeplays and stage plays and have not been able to use because it stymies my brain and totally discombobulates me. I  would love to overcome the barriers that Scrivener poses for me, since I paid hard cold cash and now cannot use it. Anyone got a great way in? I have Scrivener for Dummies. I guess I need a live class where I sit my butt in the chair and sweat through the obstacles.

Great article. The app to scan my bookshelf sort of blew my mind. gsr

Really a good news for the tech lovers. Shelfie is really a helpful ebook source for book lovers. sitewired is a tech brand which is trying to create a landmark in the web development and digital marketing sectors. They are one of the leading website design companies in denver.

I always pay attention to the details in the design. I do clipart, and I love it. From such sources, I draw inspiration and ideas for my work. Master Bundles helped me a lot in this regard. I found the templates and clip art I needed for Thanksgiving.