In life, Edgar Allan Poe enjoyed little success with his writings and suffered a piteous (albeit strange) drunkard's demise. In death, however, Poe's groundbreaking horror and thriller narratives are celebrated as among the finest not only of his genre, but of all of literature (he's even credited with inventing the detective story). As famous now as some of his and other writers' iconic creations, Poe's gloomy visage graces T shirts, mugs, bookmarks, journals, and various other products. As a fictionalized character, he's also appeared in numerous TV series and films, including most memorably in the British omnibus horror film Torture Garden and the 2012 action horror movie The Raven, starring John Cusack as the author.

But Poe—or rather, a fictional version of the real-life man—has also starred or appeared in numerous novels, most often as an amateur detective investigating serial killings and strange happenings, interweaving historical fact with dark fantasy. Other tales investigate the man behind the legend, the private as opposed to the public Poe. Still others get wonderfully weird. 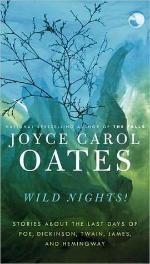 As the title suggests, the inimitable Oates explores the deaths and afterlives of five equally inimitable authors, with results both historically accurate and wildly imaginative and weird. How weird, you may ask? Well, in the case of Poe, after his rather unceremonious demise in the streets of Baltimore, the writer finds himself the sole occupant of a remote lighthouse where he eventually falls in love with a one-eyed, amphibious creature. Oh yes. 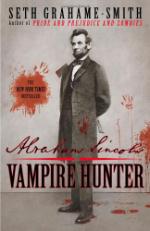 Appearing as little more than an exposition delivery man (and then dying), Poe's cameo is nonetheless an important one in the overall moving of the novel's narrative. He reveals to his old pal Lincoln (yes, they're dear friends here) that vampires have been flocking to the US due to the slave trade, with the intent of enslaving both white and black citizens. Vamp assassins take out Poe, and Lincoln pursues politics only so that he may quell the vampire uprising—further solidifying the Emancipation Proclamation as a strategic war move and not a morally decent thing to do. 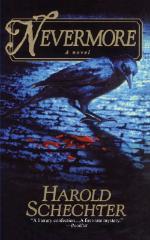 Written in first person from the perspective of Poe, Nevermore is the first of four mysteries by Schechter to cast the writer as an armchair detective of sorts. Here, Poe publicly disses Davy Crockett's memoir, only to receive a visit from the King of the Wild Frontier himself. At first, Crockett only wants to whip a little respect into the young journalist, but then the odd couple find themselves investigating a series of grisly murders that may or may not be tied to Poe's past. You read that right—Edgar Allan Poe and Davy Crockett team up to solve a mystery together. Scooby-Doo, eat your heart out. 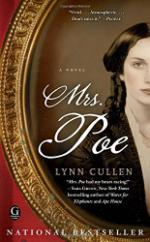 A fictionalized account of the "literary flirtation" between Poe and Ms. Frances Osgood, a contemporary of Poe's and one of the few poets at the time to receive his praise. Cullen speculates there may have been more to their friendship, and that perhaps Poe's ill and supposedly innocent wife Virginia was not all she seemed. Cullen dips into a lesser-known period of Poe's life, which aids in showing us a different side of the writer, but also—and more importantly—introduces readers to Osgood, a literary figure just as deserving of modern-day adulation as her male counterpart and possible lover. 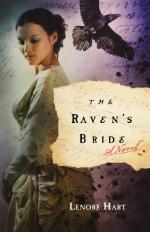 5. "The Raven's Bride" by Lenore Hart

Another historical fiction title exploring the women behind the man, The Raven's Bride focuses on Virginia "Sissy" Clemm, Poe's cousin and child bride (they wed when Virginia was 13-years-old). The novel's blurb describes the work as "part ghost story, part love story," with Hart digging deep into the societal demands of a 19th century young woman torn between a sense of duty to her troubled husband and her own desires. 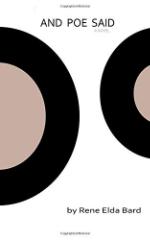 A dense novel that explores the conditions surrounding the author's mysterious death, And Poe Said works as both a history lesson on 19th century Baltimore as well as a mind-bending speculative tale blending the plausible with the impossible, much like Poe's own work. It's definitely a slow-burner, but the payoff is worth the gradual build. 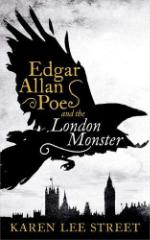 This novel takes some of the author's actual biography and fictional works and blends them with pure fantasy and a twisty crime plot. Street casts Poe's creation, the detective C. Auguste Dupin, as a real figure living in London and a close friend of the writer. Poe travels across the sea and petitions Dupin to investigate a story concerning his grandparents, the actors Elizabeth and Henry Arnold, who may or may not have been grisly serial killers a la Jack the Ripper. Are the rumors true or just penny dreadful entertainments? Or is someone out to slander the Arnolds' good name? 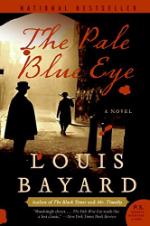 Bayard digs into Poe's real-life time spent at West Point and casts him alongside a retired New York City police officer, who has arrived at the military academy to quietly investigate the gruesome death of a young cadet. The pair not only unearth secrets about West Point, they also discover a few dark things about each other in the process. 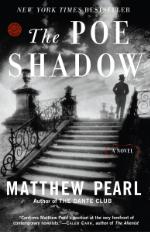 9. "The Poe Shadow" by Matthew Pearl

He's less of a character and more of a corpse, but the body of Poe at least is an integral part of Pearl's historical mystery novel. A young lawyer, Quentin Clark, seems to be the only one unconvinced that the author didn't merely die drunk and alone in the gutter, and as he investigates Poe's strange death, digs up a terrifying and labyrinthine conspiracy. 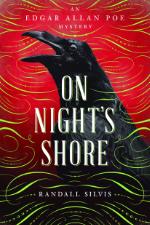 10. "On Night's Shore" by Randall Silvus

In this fictional reworking of the author's life, Poe is a journalist playing detective alongside a precocious street urchin, Augie Dubbins. The narrative takes Poe out of his native Baltimore to investigate the murder of a young woman in New York City. With Augie as his Short Round, Poe uncovers vile doings reaching up to the Big Apple's elite citizens.

What say you? Which among these books are your favorite? Any other titles you'd like to highlight? Let us know in the comments section below.

Great list but I was sad not to see Kim Newman's Bloody Red Baron. Mind you, Newman's Anno Dracula series would probably grace every list of famous people, real or imagined, appearing in novels. Nothing will top 'Nightpain' in South Park though, for what I believe to be the most accurate depiction of Poe.