It’s as crazy as it sounds. On its own, NaNoWriMo (National Novel Writing Month) is enough of a challenge for authors. The endgame—to create a 50,000 word novel in a month. I decided to write my 50,000 words over the course of 20 days, all while live streaming on Twitch. If you’re quick, you can see the videos on my Twitch channel before they disappear after 60 days. I have Gaming Prime, formerly Twitch Prime, available as a bonus with Amazon Prime, and 60-day storage of videos is one of the perks. If you’re not quick, you can go to my YouTube channel, Captain Three Kidneys, to see the edited videos stored there forever under my NaNoWriMo list.

It’s a different way to write, when people are popping in and out of the stream to watch over your shoulder. Prior to November, I had live streamed writing a short story from beginning to end in one Twitch session. Creating a whole novel, or the first 50,000 words of one, in front of an audience is an alien concept, at odds with how writing normally works. It’s not for everyone. It’s not for most people, or even for most types of writing.

There were a number of things I learned from writing this way for 20 straight days. If you’re crazy enough to even consider something like this, my self-reflections might be helpful. If you’re wise enough to be wary of the idea of live streaming as an author, then this list may help inform your choice. At the very least, it can serve as a curious look into one author behaving oddly.

I have the option. I even have a neatly branded card I can pull up that says “Be Right Back” any time I need a break. I never use it. If I were writing in solitude with no one watching me but God or the universe, I’d take breaks all the time. From the moment I started streaming each day, I just kept going until I reached my wordcount goal, updated my wordcount on the NaNoWriMo site live, checked how my friends were doing (the ones who gave me permission to look at their NaNo pages on video), and said I’d see everyone again tomorrow. Other writing I did that day, I took breaks. Something about live streaming was like being on stage. The show had to go on, I guess.

2. I’m Less Likely to Go Ahead of Pace

Going ahead of my minimum pace is one of my favorite achievements as a writer. If I need to write 1,000 words a day to get a book to a publisher on time, and I write 2500 words one day, I feel like I conquered the world. For a 20-day pace in NaNo, I needed to write 2500 words a day. That’s not a difficult pace for me over a short period of time. A couple times I went 3000 words or more, but I never doubled up, and most days I got just past my minimum and came to a stopping point. There was a great sense of relief in reaching my goal and signing off.

Surviving as an author...has largely been defined by those who were able to adapt and those who failed to see the need.

I had two doctor's appointments during that 20-day period. The one between day 19 and 20 was a sleep study. I had to spend the night hooked to a breathing machine and wires. I slept badly, my head hurt, and they sent me home at five in the morning. Normally, I would have skipped both those days of writing and just finished up on days 21 and 22. Because I was streaming, I streamed early on the 19th and edited the video before going to the sleep clinic. On the 20th, I felt terrible all day and finally sat down that evening to crawl past 50,000 words for the win. Maybe people would have noticed I skipped days, maybe they wouldn’t have, but I set a schedule and stuck with it.

4. I Found it Fascinating What Fascinates People

Some of you reading this are ahead of me on this one. You’re wondering why anyone would want to watch someone write. The entire time I streamed during November I gained followers and had more and more interactions during the streams. People encouraged me and rooted for me in the chat. People asked questions about process, and I paused from the writing to answer. Two times I forgot to switch my stream view to where my Word doc was showing. For an hour-and-a-half two different days, anyone watching was just looking at my face as I typed … and people still watched.

5. I Don’t Write my Goriest Stories While Streaming

I’m selective about the type of stories I stream. Twitch has a rule against excessive gore, but that is primarily about visuals. I could probably get away with it in prose, but I save my extreme horror for writing in private anyway. Even as I wrote scenes in the NaNo novel where I’d normally describe the damage of a gunshot in visceral, self-indulgent detail, I rethought my approach while streaming. I was aware of the audience in an immediate way. I also took a beat and thought, is it more important to describe the physical damage or the emotional terror of the character in this scene? In another situation, I would have dumped the emotion for the splatter without a second thought. You can have both splatter and emotion, too, but I think the spirit of the novel in this case was served better by the choice to veer away from the viscera.

6. It was More Inspiring and Motivating to People than I Expected

To me, this was originally just a gimmick. I’m trying to explore Twitch as an author platform, and as a full-time writer trying to survive while living my dream, I’m striving to build Twitch into another supplementary source of income. As I updated my wordcount status, I looked through the author buddies of mine who let me include their progress on the air. I edited the full video and a clip of just the wordcount checks from the end. The clips meant more to people than I expected. I talked about the books I liked from them, I cheered the ones who were ahead, and I encouraged the ones who were behind. On the stream and from the clips, I had multiple people say it made them feel a part of something. I got messages saying some authors kept going instead of quitting because of what I said. We can all use encouragement, I suppose. Who knows? Maybe it was the background music that made the difference.

7. I Started Later Than I Normally Would

Any other year, I’d sit down and bang out my word minimum first thing in the morning and move on with my day. Now, I needed to be showered and groomed. I had to be sure I didn’t wear the same shirt two or three days in a row. I had to be sure the kids didn’t need anything before I started. Had to be sure the sun wasn’t shining on the camera lens and that I had the scenes set up correctly. Sometimes I had to gear myself up mentally to be “on” for the stream. Late starts became typical. 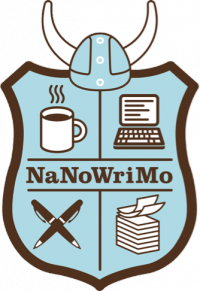 8. I Catch Myself Speaking Out Loud as I’m Writing Even When I’m Not on Stream

The one thing I believe that differentiates me from other writers on the platform, aside from my sex appeal, of course, is that I can read the story out loud as I’m typing it, so it isn’t a silent stream during the writing process. Since I’ve been streaming the writing of my NaNo novel, I’ve caught myself speaking the words I’m typing when I’m writing off camera as well. This will just add to the evidence that I am crazy.

I try to be brave with my first draft. I’m generally not afraid to make mistakes while getting a story out on the page. I’m not afraid of the inevitably heavy edits after my first draft. I believe I was still going for that fearless stance while streaming. Not to shine my own crown too much, but I imagine a lot of writers would be frozen by the reality of people watching and reading along as they wrote. Being aware of those eyes didn’t freeze me, but it gave me a constant reminder to not let the story get boring. As I went live and prepared to type the first line of a new chapter, I was immediately pushed to go with something bold instead of benign. You can fix most anything in the editing, but understanding how the reader will experience the flow, action, pacing, character exchanges, and tone in real time adds a certain positive pressure to deliver on the story.

10. This is Not Ideal for All Forms of Writing

There are a lot of creative wordsmiths doing interesting things on Twitch. It took me a lot of hunting around to find them among the many gamers so I could follow and learn from them. You can do great things live and it has potential to punch up the process. It isn’t ideal for gore, extreme horror, or erotica. While it lends itself to experimentation, it probably does not reward the most controversial work or subjects. I’m sure it runs afoul of reprint rules, so any story I write on Twitch, I’ll need to inform potential publishers of its history, if I’m not self-publishing. If you are struggling with a piece, that may be something you don't want seen by the world, though the world sure is fascinated by process. The moments I struggled to find the right word, debated the next turn in the story, or scolded myself out loud over a section that I didn’t write well enough, those were the times people wanted to know more. This is new territory for authors, but generally with the door closed and alone with your thoughts is still the ideal condition for most authors and most stories.

I’m excited about what I’m doing with this platform, how I am growing it, and how people are responding. I like the content I’m producing and the pieces it gives me to share on other platforms as I redefine my brand. I’m happy to be in on a thing like Twitch for authors, when it is still in the early stages of exploration. I’m proud of the skills I’m developing and believe the new toolbox will serve me well no matter what happens in the future. I’m hopeful more authors will take a chance on it and we’ll learn new things from each other. It’s not for everyone, but surviving as an author and creator for many decades now has largely been defined by those who were able to adapt and those who failed to see the need.

Don’t You Dare Stop! – 5 Bullshit Reasons for Giving Up on NaNoWriMo

The Three Seasons of Stephen King