Star Trek has always been my fictional comfort food. When times are tough, I can always put on an episode or open a book and things aren’t so bad for a while. I don’t know if it’s the excitement of scientific discovery, the positive vision of humanity’s future, or just the premise of a diverse and competent crew working together to make the galaxy a better place—I almost always end a Star Trek story feeling a little more hopeful than when I began. If, like me, you’ve watched all the Star Trek out there and still want more, here’s a list of books to get you started. 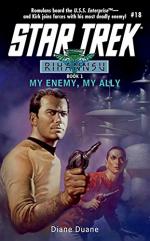 This series of novels follows the Original Series crew as they become entangled in various Romulan plots to dominate the galaxy, beginning with a secret lab of psychic super soldiers and climaxing with a doomsday weapon aimed at the heart of Federation space. Kirk is initially sent to investigate the hijacking of a Starfleet vessel. There he meets and (eventually) befriends Ael, commander of Bloodwing, a warship full of defectors from Romulus. Together, the two crews work to keep the simmering tensions between the interstellar powers from boiling over into all-out war. The Rihannsu books provide a densely detailed portrait of Romulan history, philosophy, and culture. You will come to understand the origins of their language, and how it shaped the thinking of their people and their quixotic sense of honor. While all of this is technically non-canon, you can definitely see its influence on the show Picard. If you always wanted to know more about this fascinating yet enigmatic people, Rihannsu and Picard make an excellent pairing.

Buy My Enemy, My Ally at Amazon 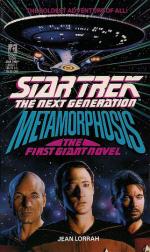 The Enterprise-D finds a seemingly magic mountain on the planet Elysia. Commander Data is sent to investigate and ends up literally going on a Hero’s Journey, complete with a quest to help a fair maiden by traveling into the underworld. This adventure tests Data to his limits, for at the end awaits a treasure beyond compare, the android’s only wish: to become human. That would be enough to explore for any novel, but Metamorphosis keeps going past where the credits would normally roll on an episode. We get to follow Data through his awkward first steps of being human, learning how to live with a fragile fleshy body, and coping with his new limitations. My favorite moment is when Data realizes he no longer has all of Starfleet’s databanks in his memory and will have to actually do his homework to prepare for briefings. The story keeps twisting from there, and goes to some pretty ridiculous lengths that I won’t spoil for you. The whole book feels like a metafictional commentary on narrative structure, and I love it just a little bit more every time I read it. 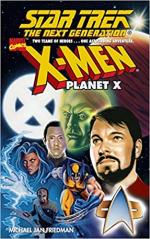 Speaking of ridiculous premises, there was a comic in which the crew of the Enterprise-D entered the Marvel Universe and fought Kang the Conqueror with the help of the X-Men. Even more ridiculous, this novel is a sequel to that comic book. This time, the X-Men end up in the Star Trek universe and help Picard and crew resolve the civil upheaval on a world experiencing mutations in its population. People are developing strange and dangerous powers, and the rest of the society hates and fears them for it. The X-Men find this all too familiar, and together with the Enterprise crew, they manage to bring both sides of the conflict together to find a peaceful way forward. There’s lots of fun bits like characters commenting on the uncanny resemblance between Captain Picard and Charles Xavier, years before Sir Patrick Stewart played the latter role. My personal highlight is Worf and Wolverine fighting X-Men villains together on the holodeck. Is it great literature? No. But it is a fun and weird pop cultural artifact worth exploring if you can find a copy. 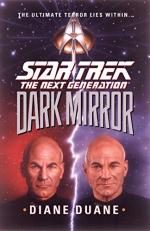 The Mirror Universe is a dark reflection of the Star Trek universe we know and love, and the source of endless “evil twin” plots. Basically, everything is its opposite. In the Mirror Universe, the tolerant and peace-loving United Federation of Planets is actually the xenophobic and warlike Terran Empire. Instead of the collegiate atmosphere of cooperation, these human supremacists are motivated solely by hatred and self-interest. In the Terran Empire, the quickest way to a promotion is literal backstabbing. The rest of the universe is similarly warped, and these books will take you on a guided tour through it all. You will learn the history of the Terran Empire’s bloody rise and catastrophic fall, follow the adventures of a space pirate named Luc Picard, and witness the Klingon-Cardassian Alliance crushing the galaxy beneath its boot heel. Just a few of the bizarre reflections you will witness as these books take you to all your favorite corners of a familiar galaxy to see just how different things could be. Honestly, it reads like what would happen if they tried to do a “darker and grittier” Star Trek reboot. If you enjoyed Discovery’s voyage to the Mirror Universe, this series is for you. 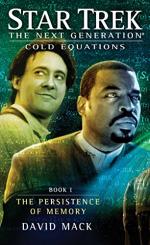 This series is all about the many different forms of artificial life that exist in the Star Trek galaxy. Doctor Noonien Soong is surprisingly not dead, and leads the crew of the Enterprise-E on a merry chase as he carries out a crazy complicated plan to resurrect his artificial son. On his journey you will learn a great deal about his life and work, as well as the development of Data. Once Soong succeeds in bringing him back, Data proves himself to be a chip off the old block, setting out on a quest to resurrect his departed daughter, Lal. Along the way they discover a secret Fellowship of Artificial Intelligences, from whom they learn the ancient history of artificial life. Of course, it turns out the AIs are scheming to destroy all organic life in the galaxy, but the books take this plot in an unexpected and much more satisfying direction than the more recent Picard. Finally, if you were wondering what the hell happened to Wesley after he vanished from TNG, these books have answers for that, too.

Buy The Persistence of Memory at Amazon 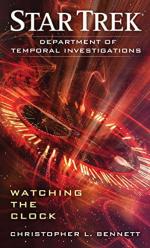 The Department of Temporal Investigations Series

Time travel is a big no-no in Starfleet. Divergent timelines, alternate histories and temporal revisionism are all frowned upon by the members of the Department of Temporal Investigations. It’s their job to keep people from screwing around in the timestream and rewriting history. If you fly your ship back to the past and pick up a whale, you’ll likely get to have an unpleasant chat with Agents Dulmer and Lucsly. The regulation of time travel is a fertile subject for sci-fi, and this series covers every angle from policing abuses to helping victims of temporal displacement cope with their situation. There are complex political machinations between the different states as they try to agree on responsible rules for time travel. It’s fascinating to witness the debates of a governing body composed of people not just from different places, but also different eras. These books are able to cover (nearly) the entirety of Star Trek history, making narrative connections between almost every time travel event in the canon. It’s a real treat for completist fans, and has a ton of fun playing with all the tropes and toys in the time travel box. The second book in the series is both a sequel and its own prequel. They’re honestly some of the best time travel books I’ve ever read, Star Trek or not.

Buy Watching the Clock at Amazon 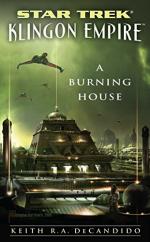 If you’re tired of reading about very polite and pleasant professionals working together in the post-scarcity utopia of the Federation, perhaps you’ll enjoy a rousing adventure with Star Trek’s beloved space vikings: the Klingons. The Empire must expand again, meaning there is battle, honor and glory to be had—a Klingon’s three favorite things. The first three novels of this series embed you with the crew of the IKS Gorkon on a tour of duty. It’s one of few stories that explores Klingon culture beyond the warrior class. The books use multiple point-of-view characters to paint a complete picture of life in the Empire at all levels of their society, from lowly medics to mighty commanders. It’s also a fun way for fans to catch up with all of the Klingon supporting characters from the shows. And of course, no Klingon tale would be complete without an epic battle. At one point, they pause their war of territorial conquest to fight a civil war on the side over the outcome of an honor duel. If you’ve ever been intrigued by Star Trek’s greatest warriors, the Klingon Empire series will show you a good time.

Buy A Burning House at Amazon 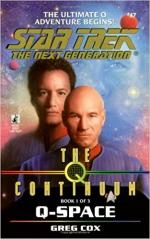 This series focuses on the impish immortal prankster Q. He has once again kidnapped Picard to take him on a wild transcendental trip to learn about the secrets of the universe. They go back in time to see Q’s misspent, troublemaking youth and witness the secret history of the Q Continuum. But on this stroll down memory lane, Picard learns about a terrible threat that awaits them beyond the bounds of their galaxy. The Q Continuum is preparing to face its greatest foe, an utterly malevolent being with the ability to reshape reality at will, more powerful than even the Q. Picard and the Enterprise end up playing referee in a battle between gods for the fate of all existence. This series is another treat for completists—through Q’s life story, the novels manage to tie together the most extensive history of the Star Trek universe I had ever read at the time.

Star Trek is a fictional universe of unlimited narrative potential, perfectly built to support a never-ending collection of stories. Sometimes I find it hard to believe Star Trek didn’t begin as a novel, as its dense ideas and rich world-building are perfectly suited to the form. These are just a few of my most fondly remembered favorites. It is by no means a complete or ranked list. Any of the listed series will be worth your time, but there’s plenty more where that came from. If there are any great ones I left out, feel free to leave them in the comments.