Amazon is doing some things right. And not just in a, “They make a lot of money, might makes right, ends justify the means” sense.

Amazon has, in some ways, made the book world a better place.

My library system buys from a supplier, and we get a 40% discount on most things. Which is huge. But when I looked up Rick Baker’s massively-expensive Metamorphosis book, Amazon had it at a very close price: 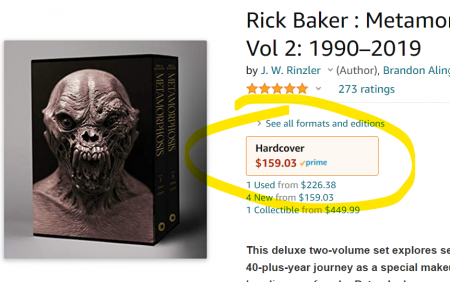 Amazon presenting an individual consumer nearly the discount of a library supplier is pretty damning.

I get it, underpaying workers, making huge profits in other areas, that's what enables Amazon to have low book prices. While I can’t endorse all of the Amazon practices that make books cheap, I stand behind this statement: cheap books are accessible books.

During times in my life when I can afford it, I buy books from places that might charge a little more in hopes of keeping bookstores alive and thriving. But that’s a choice I’ve been lucky to have now and again, and some people don’t get to make that choice.

Cheap books are a good thing for readers.

I don’t know what some bookstores expect, that you’re gonna just call around and ask for something you’re looking for? Like a goddamn animal? I wrote about indie bookstores, and there were SO MANY others that I wanted to include, but I couldn’t because they have no online purchase options whatsoever. Not even merch or gift cards.

Not only does Amazon have an online inventory, but it actually works. If I don’t nail the spelling on Chimamanda Ngozi Adichie, or Fyodor Dostoevsky, or Michael Ondaatje, or Annie Proulx, it points me in the right direction. It lets me limit by subject or rating or other factors. I don’t have to be an expert in boolean logic to find a damn book that I pretty much, sort of, mostly know the title of.

Amazon set a standard when it comes to a functional online inventory. I see this as a good thing.

Without Amazon, I don’t think the eBook would be where it is today. eBooks might be the strongest book-related argument I can make for Amazon as a pusher of books.

Before you quibble about preferences for print and so on, let me just drop this: large print.

Before eBooks, if you were a reader with vision problems, and if you didn’t like books where a plucky cat helped a grandma solve a mystery, you were up a creek. Because that’s about all you were gonna get in large print. Now, ANY BOOK that goes on an eReader is push-button convertible to large print. That doesn’t matter to everyone, but for the people who've had enough of feline sleuths, it’s huge.

Clerks give bookstores, comics stores, and record stores some of their character. This is not always a good thing.

In a Chicago bookstore, I picked up a copy of a Chuck book (I can’t remember if it was Chuck Palahniuk or Chuck Klosterman), and the clerk working there gave me some static when I brought the book up to the register. Not like a ton, but he made it very known that the author I was reading was beneath his personal literary standards.

Amazon does not force me to interact with some MFA failure dweeb who’s got a $700 refurbished Olivetti Lettera at home with a small stack of pages for his novel in the works, which is now a novella, or maybe a mini memoir.

Clerks give bookstores, comics stores, and record stores some of their character. This is not always a good thing.

Amazon’s self-publishing options are the simplest and most robust publishing and distribution options in human history. Anyone with the basic skills it’d take to get a gmail address can put a book on the kindle store and prepare it for print-on-demand. No money down. No experience necessary. You don’t have to know people who know people.

If we want to talk about the equity and diversity in publishing, I challenge anyone to provide a clearer, more accessible path to publication that is as unbiased as Amazon’s.

Any big publisher could set up SOMETHING. A novella database, 10 rotating self-pub books, limited editions that are pre-order and print-on-demand only, SOMETHING that brings new voices to books, and brings new eyes to the publisher’s other offerings. And they haven’t.

From A Rural Point of View

When you’re far away from ANY bookstore, let alone a really great one, it’s hard to get your hands on something like a Tom Spanbauer book, a Dennis Cooper book, or anything non-fiction that wasn’t an absolute bestseller.

Amazon delivered, literally, when the rest of the world didn’t seem to care much about places like the one I grew up in, places where your best shot at books was whatever the grocery store had in the rack of paperbacks next to the magazines. Amazon allowed someone in a rural part of the country, about 20% of Americans, to get their hands on the same stuff people were reading on the coasts and in MFA programs. Living podunk didn’t mean reading podunk. 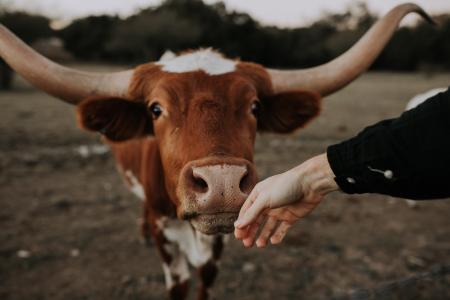 Amazon is a reliable discovery tool for new authors and books. If you find a book you like, the list of “Customers Also Bought” will keep you in good stuff for a long time.

I gotta be honest, brick and mortar, when I find a pile of Nicholas Sparks next to my beloved Tom Spanbauer, it doesn’t do a lot for me. When you put Storm of Steel in the War section, I get where you're coming from, but it just doesn't make sense next to one of those books that catalogs various military aircraft and lists their specs. It's like putting Moby Dick in the fishing section.

Discovery is an important aspect of book buying and reading, and Amazon’s virtual storefront facilitates discovery.

Where Do We Go Next?

I don't think Amazon does all the things above because they love people and they're thinking about some poor, elderly man who couldn't read Carlton Mellick III books UNTIL THE KINDLE CAME ABOUT! I don't think they created a self-publishing platform as a diversity initiative. They do everything in service of making money.

In Chuck Klosterman's I Wear The Black Hat, Chuck defines evil as the person who knows the most and cares the least.

Amazon fits that definition of evil. They know A LOT about how to sell books, and they are certainly contenders for caring the least about people.

However...I think we can acknowledge that Amazon is doing some things right. And maybe the answer here isn't to be the opposite of Amazon in every way. Maybe it's about copying some of their good qualities and backing it all up with actual care and concern for readers.

You might not be able to out-price Amazon, but you can have a staff that make bookbuying joyful. You can arrange your shelves to facilitate discovery. You can get a computer science intern to help you make your online catalog usable.

Identify some "book deserts" and offer them targeted advertising and a small discount.

Create your own set of small-print-run titles that you can't find anywhere else.

It's not evil to know the most so long as you also care.

Get Rick Baker : Metamorphosis at Bookshop or Amazon

Get I Wear the Black Hat: Grappling with Villains (Real and Imagined) at Bookshop or Amazon

The 3 Most Popular Editorial Services and Do You Need Them?

Publishing in The Time of War

Adventures in Self-Publishing Part 5: The Virtue of Patience, And Also Money
The Long & Winding Road: Part VI - What Happens When Your Book Doesn't Sell

Amazon just helped complete, and benefited from the largest wealth transfer in human history. There is no "case" for them.

Community Manager
helpfulsnowman from Colorado is reading But What If We're Wrong? by Chuck Klosterman December 24, 2020 - 7:00pm

I would refer you to the column above.
I know the big words at the top are attractive, but if you can make it to the smaller words underneath those, you might learn something.