The Familiar Volume 1: Where the Hell is Danielewski Going With This?

On September 15, 2010, it was announced that Mark Z. Danielewski was working on a twenty-seven volume serial novel about "a twelve-year-old girl who finds a kitten."

In the months and years that followed, details were scarce. Tantalizing tidbits, doled out piecemeal, stoked our curiosity, sending speculation into overdrive. Even now, a few weeks before the release of Volume 1 (when this column was written, the book is available now), the most concrete, spoiler-free summary of the story is the one provided by the publisher:

The Familiar (Volume 1) ranges from Mexico to Southeast Asia, from Venice, Italy, to Venice, California, with nine lives hanging in the balance, each called upon to make a terrifying choice...

At the very heart, though, is a twelve-year-old girl named Xanther who one rainy day in May sets out with her father to get a dog, only to end up trying to save a creature as fragile as it is dangerous...

I got my grubby mitts on an ARC of Volume 1, and I have to say—even after reading all 880 (!) pages, I have no idea where this thing is going. There's enough material there for five different novels. A lot of characters, a lot of setup, and a lot of typographical hijinks. Suffice to say, Danielewski is embarking upon something MASSIVE. The question is, will all but the most rabid of fans still be on board five, ten, twenty volumes down the line? If each volume is as long as the first (and Volume 2 is currently listed as 816 pages on Amazon), the final product would clock in at over 21,000 pages. That's a lot to commit to.

On top of that, it could be over a decade before this thing is finished. Originally the publisher claimed we'd see a new volume every three months, but with a release date of October, Volume 2 is already two months behind schedule. At that rate, if we see one book every five months, essentially two books a year, we won't read the words "The End" until close to the year 2030. Those of us who don't have children could have teenagers by then. Some of us could be dead.

So where the hell is Danielewski going with all of this? (No hard spoilers, but this is the point in the column where those of you who haven't read A Rainy Day in May might want to bail.) To determine that, I have to give you some idea of what takes place in the pages of Volume 1. The best place to start would be with the nine main characters.

But first, it's worth noting that the book proper doesn't even begin until page forty-nine. What fills up all of that space you ask? The easy answer would be: random shit. For the first few pages you have the usual: also by Danielewski, acclaim for Danielewski, a quote, an interpretation of the Pantheon logo. But then, there's a page that reads "New This Season," followed by a number of what could be treatments or short stories or even scripts for some form of broadcast entertainment hereforeto unheard of. Each has its own unique language, presentation, and typography. They don't seem to have any relation to the larger story of the novel. Then there's a picture of five orbs with odd names (we'll get to the orbs later). Then there's a conversation that seems to take place in another, prehistoric time, between two Narcons (we'll get to the Narcons later as well). You get past this, and you finally reach the first chapter.

The Cast of Characters

Listed in order of appearance (and by appearance, I mean chapter from their POV ((although that POV is not necessarily first person)) because Xanther features heavily in her parents' chapters as well as her own).

Tian Li is a healing woman of some sort and while she takes the credit and is the one known for having such powers, JingJing makes it clear through his narrative that he suspects that the cat actually might be the source of her power. This is even more reinforced through the instance of Tian Li losing her life when the cat “leaves,” allegedly to pass on to Xanther.

Then you've got the Narcons, "narrative constructs" that interrupt, provide commentary on, and even "edit" the story. TF-Narcon 9, 3, and 27. TF stands for The Familiar, obviously, and Narcon 9 relates to the nine main characters, but what about the other two? Does Narcon 3 relate to the Ibrahims? That might be redundant. What about 27? Could that be a reference to the full twenty-seven volumes? Each Narcon has its own representative font, and they seem to posses varying degrees of omniscience, with 27 having the most, so that would make sense. There's also something mathematical going on here. Multiples of 3, multiples of 9, etc. 3 x 9 = 27. 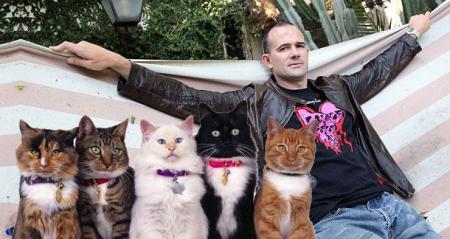 You want Danielewski? You'll have to go through us.

So... where the hell is Danielewski going with this?

It's hard to say. We've got a cat with the power to heal (maybe even resurrect), a set of spherical super-computers that transcend time and space, and a group of entities relaying/influencing the entire story. Then there was that whole bit about horrifying choices needing to be made...

I find my thoughts on this are best conveyed in the form of multiple questions:

Are the Narcons using the orbs to view/interact with the story? Is it a form of entertainment for them? (See: New This Season.) If they are truly "constructs of the narrative," would they even exist without it? How can they simultaneously control the existence of/exist because of the story itself? My head hurts.

Is existence itself in danger? (There doesn't seem to be a clear-cut antagonist or threat yet.) Is Xanther "the One," predestined to save it all? Will all nine main characters survive twenty-seven volumes? If main characters are subtracted, will new ones be added? Will all these characters interact with Xanther directly?

If not, which sections will overlap? Luther, Ozgur, and Isandorno's sections all deal with elements of Latin culture. The Ibrahims and Shnorhk have connections with Eastern Europe/Western Asia. The cat connects the Ibrahims and JingJing (and possibly Luther, but that's my own personal theory). Also, how could something so cute be dangerous?

Also, what's the deal with those "crumbs?"

Meet me back here in fifteen years to discuss.

Maybe the better question is, does Danielewski know where all of this is going? According to this NPR interview, he finished ten volumes, and then went back and did a page one rewrite on Volumes 1 and 2. I assume he will continue to rewrite all ten volumes.

This whole thing must have been a huge leap of faith on Pantheon's part. They were initially presented with just the first five volumes. What they read must have been enough to convince them this wasn't a huge mistake. What other author would be given this much freedom? Stephen King? No one wants to see a twenty-seven volume story from that chronic overwriter. I don't know what Danielewski was paid, but Pantheon must have crunched the numbers and come out on top. I envision a giant chalk board and a dozen mathematicians working feverishly on a formula weighing prestige against the diminishing financial returns of each successive volume. Increased costs versus waning interest. If Danielewski gave them a discount for buying in bulk, they might not go bankrupt. If he is charging them by the book... they're screwed.

Or maybe we're the ones who are screwed. Danielewski has compared the whole situation to producing a TV show:

So the fact of the matter is, we might never know the answers to our questions. It all depends on our attention span, and whether Danielewski can juggle that many balls for that long and manage to keep it interesting. Because like I said, as a reader, this is a huge commitment. I guess time will tell.

Will you be reading? Will you continue to read? And if so, where do you think all of this is going? Sound off in the comments.

The Fifty Year Sword: An Interview With Mark Z. Danielewski

Also Proust, Vollmann, Knausgaard: all good writers, but I'm not into the sort of commitment demanded by some of their works.

I can't see myself getting any kind of invested in a story when in the back of my mind I keep thinking, "This is never going to come to a conclusion."

Whenever book 24 comes out and it looks like it'll make it, then maybe I'll pick up the first one.

Joshua Chaplinsky from New York is reading a lot more during the quarantine May 14, 2015 - 6:42am

Nathaniel: You're gonna be waiting a long time.

I hate you, Josh.

Haha, why? You're reading it right now. (Although hopefully I'll have an ARC of Vol 2 in a couple months.)

Also, what do you think so far?

Saw a copy. Many pages only have one word, one sentence, or some other formatting with a lot of white, so effectively it might be more like 5--600 pages.

Joshua Chaplinsky from New York is reading a lot more during the quarantine May 19, 2015 - 4:26am

Yeah, It's actually a very quick read for the amount of pages. Lots of white space.

Josh, my apologies for neglecting your question two months ago. Heh.

I thought it was slow getting into, but once I found my footing in the narrative I quite enjoyed it. The whole Narrative Construct subplot gave me a massive erection.