The Girl on the Train​ is a bestseller. It's also a movie. But if you think that's all it is, you'd be very, very wrong because the Girl on the Train ​is more, so much more than just those two things. After I'd finished it and pondered for a while what all the fuss was about, it suddenly struck me, as hard as as if someone had hit me square on the forehead with a hardened bread pellet, that ​​hidden in amongst its pedestrian prose and improbable plotting are messages of timeless wisdom. It struck me further, like a second bread pellet, this time in the solar plexus, that it is this, and not our lazy tendency to believe publishing hype, that accounts for its inexplicable success.

Luckily for you, I'm here to unearth these universal truths and allow you to understand and benefit from them.

You may thank me later.

Life Lesson 1: Women are girls until the day we die

We women need to toughen the fuck up and make our own minds up about what we’re worth.

Publishing, like any other business embedded in the tricky area of culture, is prone to sudden violent fads, and no fad has become more sudden or violent than the recent and dogged insistence that any female not yet in her coffin, particularly one involved in some kind of domestic mystery, is not a woman, but is in fact still a girl. I’d like to link this tendency to a sinister plot by the patriarchy to infantilise our cultural conception of women in general — sparked perhaps by the realisation that male privilege is in danger of shrinking from 100% of all available resources to a bollock-threatening 95% — but that would be crediting the patriarchy with way too much intelligence. I don’t actually have an explanation for this phenomenon except to blame

And to point out how ridiculous the following sound: The Third Boy, The Boy Who Would Be King, The Boy with the Golden Gun, The Boy from U.N.C.L.E and Slenderboy.

Life Lesson 2: Gin and tonic in cans spells the end of civilisation

There was a time when a properly made gin and tonic came on a tray held by a cocktail waiter and was served in a dark wood panelled room with a fan turning lazily overhead and the stuffed heads of various types of large wildlife decorating the walls.

Those days are gone.

If The Girl on the Train is actually an update of Christie’s classic 4.05 from Paddington, we’ve now entered a stage in our culture where James Bond would walk into a bar, order a martini and instead of shaking the cocktail, the bartender would pop the lid of a tinnie and stick a straw in the hole. Friends, the days of refinement and taste are over. We buy our clothes from Gap, our books from Amazon and our food boxed and ready to eat. A can of gin and tonic encapsulates in one small aluminium cylinder everything that is wrong with consumer society. We’re detached from nature, strangers to ourselves, unable to cope with the simplest tasks — even mixing a simple drink. Soon our legs will rot away and we’ll be reduced to rolling around on the floor, ordering in comestibles from giant soulless factories staffed by robots. In millennia to come, when aliens land on our planet and find humans have shrunk to the size of rats and live in underground burrows, their scientists will try to figure out what went wrong with this once impressive species. The argument will rage for decades until finally an archaeological dig in the part of Britain which was once called Essex unearths an empty can of gin and tonic and the terrible truth becomes clear. 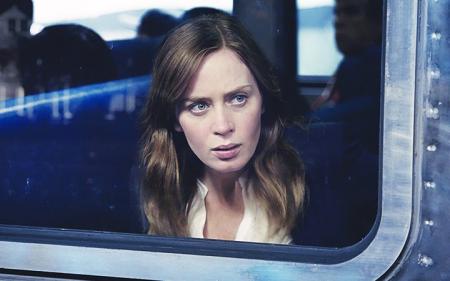 Everyone in The Girl on the Train is or has been married. Everyone in The Girl on the Train is as mad as a sack full of wet weasels. Put these two facts together and the only logical conclusion you can draw is that marriage drives you crazy. No one has been driven more crazy by marriage than the book’s protagonist Rachel, the eponymous girl on the train who has been dumped by her ex-husband and now spends her time gazing gloomily at the scenery and also at other people being driven crazy by the married state. She isn’t the only one. To prove my argument, I have prepared a handy if spoiler filled visual guide to the mental state of the characters, before and after they decided to get hitched:

Before – almost normal if a bit wet,

After – raging alcoholic with a train complex

Before – bonkers but harmless,

After – sexual compulsive with suicidal tendencies

After – weeping, hollowed out shell

The only character who doesn’t behave like a lunatic during the story is Megan’s psychiatrist, the handsome, enigmatic Dr. Kamal Abdic. Guess what?

No doubt if Abdic had decided to find a Mrs. Abdic to settle down with, within two chapters he’d have gone from patiently listening to Megan ramble on about all the men she’s slept with to pouring whisky on his breakfast cornflakes and sitting on park benches having long conversations with nearby trees.

Final Life Lesson: Women need to toughen the fuck up

Rachel, dumped by Tom who then installs Mrs. Tom #2 in the house he once shared with her, spends most of the story wishing she could have him back. The scary thing about this scenario is how plausible it sounds. We’ve all known women who, when treated badly by their partner, test the patience of their friends to breaking point by analysing in quantum-level detail every nuance of What Went Wrong. Instead of feeling relieved that at last she’s free of the bastard and that some other poor cow is now having to suffer his mood swings and comments about her weight every time she opens a box of Pringles, Rachel longs to be wrapped in that nightmare again. Even if marriage does drive you crazy (see Life Lesson #3 above), even insanity isn’t enough of an explanation for Rachel’s dogged determination to ignore the obvious. She’s an echo of real life, of the female tendency to assume that men are right, that their opinions matter just that little bit more than ours, that they are the adjudicators in the great game of who gets to win and who gets to lose. We women need to toughen the fuck up and make our own minds up about what we’re worth.

Or we can carry on believing that what men think is the final verdict and end up hopeless drunks with a deep interest in rolling stock. The choice is ours.

Cath Murphy is Review Editor at LitReactor.com and cohost of the Unprintable podcast. Together with the fabulous Eve Harvey she also talks about slightly naughty stuff at the Domestic Hell blog and podcast.

Bookshots: 'Everything You Want Me to Be' by Mindy Mejia

Bookshots: 'The Lost Civilization of Suolucidir' by Susan Daitch

Even my daughter (4 1/2) noticed the inequity of the man/girl dichotomy: She was munching on some chicken nuggets from a McDonald's Happy Meal (Mama-too-tired-to-cook) while looking at the box which was decorated with superheroes. She is currently obsessed with the Supergirl and will be dressing as Supergirl for Halloween. She was asking me who the other superheroes were.

Even the kids know it's wrong.

I'm not especially vespertilian, but I'm holding out for Batbaby.

A very hot topic that you don't just need to hear about, you need to learn about and get involved in. I see that you are doing just that, I am at the beginning of my journey, but I am as serious as I can be. Is it possible to make a video on this topic? I can even get you a https://www.movavi.com/screen-recorder/ program from Movavi, I would love to watch you, and it's time to start my own blog=)