The Joy of Horror Novelizations

There is an alternate universe where the killings in Halloween are the result of a druidic curse cast by the god Muck Olla, and where E.T. the Extra-terrestrial has the hots for Elliot’s mother. This is a universe where movie novelizations are king. Called “beyond revolting” by Emma Thompson, and compared to “flipping greaseburgers” by another writer, movie novelizations are a bastard genre that gets no love, but for those of us who grew up before the VCR they were the only way to watch and re-watch our favorite movies, and even now, because they’re often based on earlier screenplay drafts, they’re gateways that allow Bizarro World versions of familiar stories to ooze over into our dimension. Until Peter Jackson’s remake, the only place to see King Kong’s famous spider pit scene was in the 1932 novelization of the film, and the first novelization of Friday the 13th Part III features an entirely different ending from the movie, which was corrected, confusingly, in a second novelization published a few years later.

At first, novelizations were purely practical. A popular play could only be seen by a small audience, but slap that play into a book and you could sell the same idea twice. Shakespeare’s Pericles, Prince of Tyre was novelized as The Painful Adventures of Pericles, Prynce of Tyre in 1608 by the sadistic pimp George Wilkins, and throughout the 19th century plays were regularly turned into novels (often with photo inserts). The very first cliffhanger serial, 1912’s What Happened to Mary, gave birth to the very first movie novelization, published simultaneously as a serial in Ladies World Magazine with a new installment each week to tie in with each new film installment. In 1913, that novelization was turned into a book, What Happened to Mary — A novelization from the play and the stories appearing in The Ladies World written by Robert Carlton Brown, who was a buddy of Man Ray and Marcel DuChamp, and would go on to invent emoticons and the basic idea of the eReader all the way back in 1930. 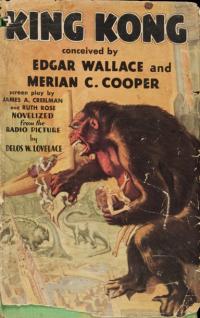 The first big hit novelization was King Kong (1932) by Merian C. Cooper and Delos W. Lovelace, which was a movie before it was a book, but then it was a long time before novelizations had that kind of impact on publishing again. Then, in the mid-60’s, three television series had their tie-in novelizations land like an extinction-level event: Dark Shadows (34 books), Star Trek (13 books) and The Man from U.N.C.L.E. (23 books). It took about five minutes for publishers to realize they could squeeze more money out of motion picture IP, and then they were off to the races, from the best-selling novelization of the Satanic shocker The Omen, to William Kotzwinkle’s E.T. the Extraterrestrial, which landed him a huge advance, sold 3 million copies, and spawned a sequel.

The biggest problem with novelizations is that while screenplays average between 20,000 and 30,000 words, even the shortest novel usually winds up being well over 50,000, and usually closer to 70,000. The solution? Padding, and it comes in every flavor of the rainbow. Jason Lives: Friday the 13th Part VI burns page after page by delving into the psychological processes of Jason Vorhees. Richard Elman’s Taxi Driver transforms Paul Shrader’s screenplay into a stream of consciousness internal monologue:

Words to that effect. You don’t take the kid who steals coins from your newsstand and make him your cashier. Hitler is a bum tiddle yum, tum, tum.

The maniacal laughter of men in the streets mocked his love of reason. Nuns flagellated each other on the convent steps. A man sold a tulip to a corpse. The foaming policeman arrested a goat.

The best novelizers are the ones who come up with a point-of-view that makes their version of the movie distinct. The Toxic Avenger novelization is as deconstructed as David Eggers, with chapters narrated from multiple points of view, right down to the extras. Some use experimental techniques that come straight out of the Beat Generation. A gunfight in the Black Devil Doll novelization is simply the word “BLAM!” repeated for eighteen pages. To duplicate the moment in Gremlins 2 when the titular beasts attack the projection booth and seemingly destroy the film, the novelization has its author “kidnapped” by Gremlins who interrupt the story for a two page political monologue.

Sometimes, compared to the finished films, novelizations are the preferred version. Jonathan Maberry’s novelization of The Wolfman is far more coherent than the hacked-up feature film version starring Benicio del Toro that the studio ultimately released. But authorship can also be a problem. Movies increase in artistic prestige the fewer the number of names associated with them (usually just the director’s) but novelizations emerge from a veritable swarm of names. A novelization of Francis Ford Coppola’s Dracula bears this tortured credit block: Francis Ford Coppola’s Dracula —the novel of the film by Fred Saberhagen and James V. Hart, based on the screenplay by James V. Hart, from the Bram Stoker Novel.

Or consider the best-selling novelization of The Omen, by the screenwriter David Seltzer (all screenwriters own the rights to adapt their screenplays into novels, but most sell those rights). Then, the following four Omen novelizations are by Gordon McGill, with the fourth and fifth having nothing to do with the made-for-TV Omen IV: the Awakening (for one thing, the book features rectal childbirth, which is entirely absent in the movie version). The fifth novel ends with the hero swearing to destroy Damien by denouncing him to the world and sitting down to type...the opening to the first Omen novelization. The “author” of a movie is all-important in establishing its artistic legitimacy, but authorship in novelizations is an endless hall of mirrors that climaxes with Jessica Fletcher, the fictional best-selling mystery author played by Angela Lansbury in Murder, She Wrote, becoming an actual best-selling mystery writer with close to 40 books to her fictional name. 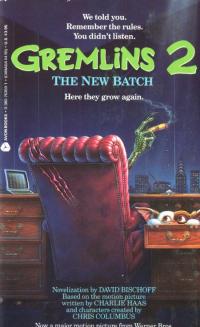 And who is the author of a novelization like Percy’s Progress? A cult novel about a penis transplant, Percy was originally written by Raymond Hitchcock (father of musician Robin) and was turned into a movie in 1971 with a soundtrack album by the Kinks called Percy’s Progress. Then, Raymond Hitchcock was hired to write the novelization of the movie based on his novel. Or John Russo (co-writer of Night of the Living Dead with George Romero) who wrote a screenplay for a sequel to Night of the Living Dead, turned it into a novel called Return of the Living Dead when he couldn’t get it produced, sold his novel to a production company who then hired Dan O’Bannon to direct, who then ditched everything in Russo’s screenplay but the title in order to make a movie called Return of the Living Dead which they then hired John Russo to write the novelization of, which he did by significantly altering the movie (including adding a KGB subplot).

Some filmmakers respect their novelizations, like horror auteur David Cronenberg, who famously invited novelist Dennis Etchinson to the set of Videodrome before he novelized it in order to answer his questions and make sure he was capturing the spirit of the movie. Or James Cameron, who loved Orson Scott Card’s novelization of The Abyss so much that he used the backstories for the characters that Card developed as guidelines for his actors. But more often than not, filmmakers feel like Emma Thompson and find the very idea grotesque.

And some novelizers earn this shame. Their writing can get clunky, as in Return of the Jedi, which features this immortal line:

Leia was fast becoming distraught, confused. Intimations were rushing at her like wild owls out of the night, their wings brushing her cheek, their talons catching her hair, their harsh whispers thrilling her ear: 'Who? Who? Who?'

And who can forget the most horrifying novelization of them all, William Kotzwinkle’s E.T. the Extra-Terrestrial in which E.T., the mild-mannered alien, becomes sexually obsessed with Elliott’s mother:

[E.T.] crept down the hall to Mary’s room and peeked in. The willow-creature was asleep, and he watched her for a long time. She was a goddess, the most beautiful thing he’d ever seen…Mary, said his old heart. Then upon paddle feet, he tiptoed over to her bed and gazed more closely.

Horrostor by Grady Hendrix comes out on September 23, from Quirk Books.

Grady Hendrix is a writer and journalist and one of the founders of the New York Asian Film Festival. A former film critic for the New York Sun, Grady has written for Slate, the Village Voice, Time Out New York, Playboy, and Variety.

A History Of The Halloween Franchise In Print

Writer's Tilt: What It Is and How to Avoid It

Anita K. Newman: “Never give up!” A Conversation with the debut Children’s Book Author

Awesome column! I've expressed my love of novelizations on this site before, so it's nice to see that love extended. For me, horror novelizations in particular were a way to "see" such movies, which I couldn't view in a traditional sense otherwise (too scary for a kid to watch, though reading it was okay). Alan Dean Foster's novelization of Alien was a particular favorite.

Movie adaptation novelized from the film. Yea figure that one out.

While not horror related, I have a deep fondness for movie novelizations. I lived in the country growing up and rarely got to go to the theater, so every now and again I could pick up the blockbuster hits from Walmart's book section when we went into town. Of all of them that I read, the novelization of Back to the Future II by Craig Shaw Gardner still has to be my favorite.  Oddly enough, I was so satisfied by the book that I didn't bother seeing the movie until almost 20 years later.

Blockbuster sold books? So many stuff I missed cause I was only around during the last legs of the Blockbuster video stores. (Seriously, you wont even find those any more where I live.)

Ghostword from Cornwall is reading The Land of Laughs by Jonathan Carroll September 24, 2014 - 6:25am

The maniacal laughter of men in the streets mocked his love of reason. Nuns flagellated each other on the convent steps. A man sold a tulip to a corpse. The foaming policeman arrested a goat.

So this was from the Director's cut ?