For readers, fans, fellow writers, publishers, and the entire horror community, the death of author and San Antonio police officer Joe McKinney was shocking and heartbreaking. He was barely into his fifties, and aside from a couple comments online by fellow officers who said he died of liver failure, there was no cause of death officially released anywhere I could find. I was heartbroken at the loss for a variety of personal reasons.

Joe McKinney was an award-winning author with over 20 completed works. He was a pillar for zombie fans in particular, but all his horror had heart, depth, and action. Readers responded. Fans bought his books and wanted more. He served as an officer of the Horror Writers Association for a time.

Joe McKinney was a celebrated member of the San Antonio police department. He could have stepped away permanently to make his living just from his writing, but he decided his community and fellow officers needed him. In those 22 years of service, he was promoted to Detective and was promoted again to Sergeant.

This Loss is Personal and Different

In 2006, before being a writer for a living was any more than a pipe dream for me, I bought Dead City by Joe McKinney from a brick-and-mortar bookstore from an actual horror section. At the time, ordering books or anything else from Amazon was still pretty alien to me, and I struggled to find any zombie books. Can you imagine such a world? Dead City was sharp and action-packed. The police procedural elements were spot-on, as you might expect from McKinney’s background. These gritty, realistic police elements, the relationships between his characters, and the bold, raw action of his stories would define much of his work. And I read much of it in the years that followed.

I missed the Joe McKinney who had included me, remembered me, inspired me, and taught me to be a better writer.

I became a full-time author in February 2013 and went to my first World Horror Convention in New Orleans in 2013. That's where I met Joe McKinney in real life. There are a small handful of authors I place on a pedestal in my mind because I bought and read their books before I was writing professionally. They exist on a different level no matter how much I get to know them as peers later. McKinney was kind, gracious, humble, and inclusive in that first meeting.

At that convention, he gave a reading of a story he dedicated to a friend he had loss. It was powerful and emotional and he broke down crying. That was a big moment for me as a storyteller. It affirmed that storytelling could be more if I really worked at it. It also affirmed that McKinney was a master at this craft.

I would meet him again at WorldCon in San Antonio later that summer. Even though we had only met briefly, he remembered my name and details about my life. He made me feel like I belonged.

We connected online and I was able to see his grace and intelligence on a regular basis as he interacted with readers, fans, and other writers. He wrote essays on the craft of writing that helped define and improve my work. I still think back on some of the lessons I learned.

Interactions with him had depth and meaning. I recall a post he made back when the use of bodycams was becoming a common police policy across the country and the police were coming under greater scrutiny. As with many topics on Facebook, this was a contentious one for people, and especially for police officers who felt they were being unfairly judged. Joe McKinney gave a very nuanced and intelligent assessment of what the future might hold through the use of these devices. That was the sort of elevated dialogue I had grown used to from him.

All of this was a huge part of why losing him hit me so hard. There were other reasons too.

In interviews, I heard Joe McKinney talking about stepping away from horror and writing more straight police procedurals. He discussed how he wasn’t sure his current audience would like them. He said he was interested in writing under a pen name to see if he could “do it again.” He wanted to see if he could build a similar fanbase in another genre starting from scratch. My understanding from a couple authors was that he did this, but I have no idea what his pen name was or the titles of any of those works.

He stepped back from his leadership role with the Horror Writers Association, he stopped going to conventions, he stopped posting as many original posts on social media and mostly just commented on other people’s posts. A number of the remembrances written about McKinney, after the news of his death broke, began with notes about the last few years. “I didn’t see him as much after he stopped attending conventions, but …” “We got into a lot of online arguments over the last couple years. My politics must have been too much for him, but…” This was a common pattern. Others spoke in private messages about the complexity of their relationship with Joe.

Shortly after he started to pull back from conventions, I saw a post on Facebook from a reader who tagged McKinney and asked why the character name on the back copy of one of his books didn’t match the name in the book. McKinney responded and explained that they were written at two different times and the publisher messed up because they used his original pitch to create the back copy after names were changed in the drafting of the story. But the tone was hostile and ended with “congratulations on finding one of those instances. This is a very proud moment for you, I’m sure.” The interaction was jarring to me because it seemed out of character. I thought at a time the reader must have hit a nerve. 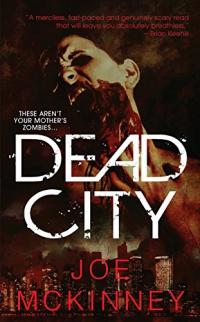 A number of authors started having conversations with Joe McKinney wherein he said he was struggling the PTSD and other issues. Often, these discussions began around publishing or promotion opportunities he had to pass on.

Lots of interactions changed. The nuanced discussions ended. He often came onto political posts and tore into the poster. These interactions devolved into name-calling. At first, a few people were just excited they were talking to Joe McKinney. After a while, these vitriolic comments got to be what was expected of him. People would even bring up how they used to interact with him, and they expressed how they didn’t understand what had changed. I never saw McKinney engage with those comments.

I saw one post with a female author, poet, and editor wherein Joe McKinney argued with her about how she and other women should trim their pubic hair. Needless to say, it was not received well by her or other people who saw the comments. On a separate post where she expressed her disgust at how he spoke to her, there was a long discussion about how McKinney used to be and how the change in his character was so abrupt. Those who didn’t know him before said it must just be his true colors coming through, the way bad guys can only hide their true nature for so long. None of us were there to defend his actions, but we had trouble expressing why this felt different from the typical dudes behaving badly on social media. There almost seemed to be a switch flipped that changed him from who he used to be and how he used to treat people to who he became. And none of us had an explanation.

I disconnected with him online because I couldn’t watch it or be involved with it anymore. I missed the Joe McKinney who had included me, remembered me, inspired me, and taught me to be a better writer. I didn’t care about any political beliefs he had in particular. I was worried about him and at a loss for what had caused so drastic and complete a change. I felt like I lost him then, and so when the news of his untimely death came out, I felt like I had lost him twice, and that broke my heart more deeply than other such losses from among my peer group of fellow authors.

I’m in tears as I’m writing this. I’m sad that he’s gone. I’m sad that his wife, daughters, and parents lost him from their lives. I’m sad for San Antonio and the fellow officers I know looked to him as a mentor. I’m sad for readers, friends, and fellow authors who held him in a special place in their hearts. I’m sad to not be able to read new books from a talented storyteller who changed the way I looked at the craft of writing. I’m sad some of the people who had negative interactions with him online didn’t get to meet him and experience his spirit in the years I first met him. I’m sad I have no explanation for what exactly happened in his final years. I miss Joe McKinney and I’m sad for us all.

Get Dead City at Amazon

Why The Hell Do We Want Everyone To Die and Eat Our Brains?: Zombie Fiction and The American Obsession With The End of the World

The Three Seasons of Stephen King

Community Manager
helpfulsnowman from Colorado is reading But What If We're Wrong? by Chuck Klosterman August 23, 2021 - 12:19pm

I have a person in my life who I do not care for on a deep and deserved level, but other people who are important to me have a lot of affection for this person. People can be really different depending on when you meet them, what the circumstances are, and so on, and while I'll never come around on the person I don't like, I accept that the relationship others have with them is just different, and I accept that the person I don't like doesn't treat me right, but they treat others differently.

Thanks for exploring this, even if it's complicated.