"Whenever a new Sam Pink novel lands on my hands, I start coming up with excuses for the appointments I’ll either be late for or simply miss. Pink’s work is always original and entertaining, the kind of literature for which the clichéd and utterly unattractive term “unputdownable” was invented. Rontel, his latest release with Lazy Fascist Press, is no different, except for the fact that it turned me into the guy on the bus who seems to be laughing at some internal joke."

Those words were published in February of 2013. That's half a decade ago.

Nothing has changed. Pink keeps putting out books and I keep putting everything aside to devour them. Why? Because reading Sam Pink is entering a world where humor and absurdity constantly collide with depression and the underlying violence/violent urges hidden in everyday life. Pink can make you laugh, cringe, and delve into a philosophical rabbit hole, sometimes all within the same paragraph. His short, sharp prose and his straightforward, bizarre poetry are amazing when it comes to teaching readers about voice. Simply put, no one sounds like Pink. Now that there is a new book coming (a double book!), I thought it'd be a great time to celebrate the universe he has created (if he wrote genre fiction, fans would surely be talking about the Pink Mythos by now) and to talk about some of my favorite Pink books.

Yes, I loved Rontel, for example, mostly because it's packed with philosophical vignettes that are wildly entertaining. However, every time I meet someone who has never read Pink's work, I immediately tell them to get their hands on Witch Piss. At once hilarious and heartbreaking, Witch Piss is the quintessential Chicago novel. While Chicago has always been at the center of Pink's work, the city never took center stage as much as it does here. In this novel, the city is the backdrop for all the action, but its streets, weather, and even public transportation transcend and become crucial elements that shape the characters' lives. In Witch Piss, Chicago is an omnipresent macrocosm that feeds off its inhabitants and merges with them to create a strange, humorous, fast-paced, and somewhat violent state of mind.

75% of conversations in Chicago seemed to involve a whooped ass.

Or an ass that should've been whooped.

An ass that narrowly avoided its whooping.

An ass that wouldn't escape its whooping.

Witch Piss was published in early 2014, but it ties in beautifully with one of his latest releases, Your Glass Head against the Brick Parade of Now Whats: A Beautiful Nice Poem, which was originally published in 2016 and published in paperback by House of Vlad Productions in 2018. In this long poem cut into bleeding pieces, Pink revisits a plethora of themes that have been part of his oeuvre since the beginning: death, violence, boredom, oblivion, suicide, humor, the ability to go on when nothing makes sense, and a constant reevaluation of every mistake ever made. It also contains some of his sharpest/saddest writing, which somehow also manages to be beautiful.

The feeling that everything you do is doomed in a way

that might not seem obvious at the moment but is

always leading to one last moment of doom where you

finally admit that there is nothing to be done and never

was and you have been defeated and absolutely shitted

on and the only thing you ever liked about yourself was

that you were stupid enough to think you were being

If you don't know what I'm talking about when I say his entire catalog shares a powerful, unique voice, go ahead and judge his entire career by the bloody beauty and insanity contained in this line from I Am Going to Clone Myself Then Kill the Clone and Eat It: “If I ever decide to shoot myself in the head I will make sure to stuff my mouth with confetti so that it looks pretty for no one.”

To these books you can add many others like No One Can Do Anything Worse to You Than You Can, The Self-Esteem Holocaust Comes Home, The No Hellos Diet, Person, Hurt Others, and now The Garbage Times/White Ibis: Two Novellas, which came out on May 1st via Soft Skull Press. This latest addition to Pink's catalog is as great, if not better, than his previous work. That is what makes this the perfect time to celebrate what this writer has accomplished: a tone that is his own, a voice that is as recognizable as Apple's logo, and a career based on sad weirdness and ultra-personal moments turned into fiction that is too real not to be read as nonfiction. Take White Ibis. It starts out with trying to drug a cat so it'll sleep through a move. Then you're suddenly in Florida, surrounded by animals and a white ibis and...crap, you're hooked. Yeah, welcome, once again, to the world of Sam Pink. Enjoy the ride. Just don't ask any reviewer how the hell he does what he does.

Actually, scratch that, I know how he does it: he knows you and puts you in his books. Yes, you. I'm going to steal my own words again, this time going back to 2012 and the release of No One Can Do Anything Worse to You Than You Can: 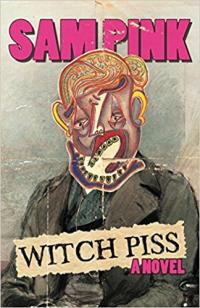 "I'd love to cut your face open with the smaller blade on a Swiss army knife."

There is something wrong with this man. You blink.

"I want to be the kind of person who would only kill himself if given the chance to watch it."

"I'm willing to sit in a room for decades to plan revenge on someone who accidentally bumped into me on the train."

You take a deep breath. Everything is fine. Pink is simply a very talented author with a unique voice and style. Probably no blood was shed during the writing process. The book you're devouring is nothing more than that: literature. Then an accusation jumps out at you.

"You only know what to do when no one is watching."

This isn't funny any more. Somehow Pink knows you. No. It's impossible. It's getting harder to keep your cool, to believe it's all just a coincidence. You blink again and swallow.

"You want to know something? — you are a mathematical equation that begins with a bunch of meaningless signs and ends the same way but it looks like a lot has happened (and you know I mean that as a compliment)."

Your breathing turns fast and shallow. The desire to punch something becomes a burning sensation in your chest. Fiction. The confessions and accusations are just that: figments of Pink's imagination. You keep reading.

"At home, eating my own heart off a commemorative plate that has a picture of my corpse on it."

Your head should be saying "Hold on tight!" but instead it's cackling madly, full of that unfiltered joy that comes from finding the kind of book that keeps you glued to the pages regardless of what the world around you throws your way. You read words that speak of words that are not there. You hold the text which holds the meta-text:

"(Phrase-equivalent of a picture of a person lying in a carpeted hallway, head smashed apart.)"

Correction: the text holds you.

Yeah, that's it: the text holds you. Every text holds you. The Garbage Times/White Ibis will hold you. You should let it. You can go read some formulaic crap and feel clean and untouched by the beautiful words of this individual, but why would you? The best way to celebrate Sam Pink is by letting him hold you. Do it.