Hazel Drew’s lifeless body was found floating in Teal’s Pond in Sand Lake, NY, on July 11th, 1908. She was young, attractive, and her violent demise baffled many. Over a century later her murder is still unsolved. All that remains is her gravestone at the Brookside Cemetery in Barberville, NY, not far from the scene of the crime. The autopsy revealed the cause of death to be repeated blunt trauma to the back of the head.

Hazel Drew had, up until that time, been working as a governess in Troy, NY, for a man named Edward Cary, a respected engineering professor at Rensselaer Polytechnic. She looked after his children and lived in his home along with his wife. She dined with the family and was, by all accounts, quite beloved by them and the community of Troy.

Still, many questions remain. What would lead someone to brutally murder a young woman in her prime, who seemed to be living such an innocuous life? What happened by that pond? Was she meeting a man? Why was she so well dressed? Why had she suddenly quit her job as governess a few days before? Why did she give multiple cover stories to anyone she talked to?

I can almost see her hovering over David Lynch, whispering in his ear, “This is the girl.”

It could be that she was entangled with forces more powerful than she could handle. In the years leading up to her death, she had started living large. Travelling by train to Albany, Boston, NYC, and Providence, RI, on a regular basis. Wearing tailor made clothes which were beyond her modest financial means. Much speculation abounds as to the identity of her wealthy benefactor. Love letters were found in her abandoned suitcase along with not one, but two kimonos. One of the senders of said love letters is a main suspect in a documentary currently filming in Troy.

Clearly, there is more to this case than meets the eye. The story continues to haunt history and true crime buffs to this day. One writer even immortalized her on the television screen, in the cult phenomenon, Twin Peaks.

Twin Peaks was the creation of Mark Frost and David Lynch, and first aired on ABC in 1990. It turns out that Mark Frost’s grandmother, Betty Calhoun, who lived during the time of the murder, would tell her grandson stories about Hazel Drew’s ghost haunting the woods near the site of her murder, which just so happened to be where he would spend his summer vacations. The stories stayed with him, and when he and Lynch were brainstorming a TV series he decided it was a fascinating premise, brimming with loose ends and unanswered questions, to launch the perfect eerie show.

Initially, they meant to set it in upstate New York in the very town Hazel lived, but the studio preferred a town with a larger population, so they relocated to Oregon, to the iconic setting we are so familiar with today.

The show begins post death. Laura Palmer is found at the water’s edge, her lips and skin already blue. The entire town is in mourning, reeling from the shock of such a ‘good girl’ ending up naked and dead with no explanation. Her parents, friends, confidants, and lovers are grief stricken beyond comfort. Laura Palmer is played by Sheryl Lee, whose resemblance to Hazel Drew is beyond striking— almost as if Hazel had cast herself. I can almost see her hovering over David Lynch, whispering in his ear, “This is the girl.”

Twin Peaks chronicles the gradual unearthing of the character of Laura Palmer. The show hinges on two jarring images that do not seem to fit. The first one is a prom picture on her parent’s mantle— a perfect daughter. The other we see during the opening—her naked corpse, wrapped in plastic. The audience is forced to reconcile these two images, one of virginity, the other a body corrupted by sin and decay.

Twin Peaks draws the audience in, and like many David Lynch projects, the way the story is told makes the viewer an accomplice. Just as in Blue Velvet, where there is a tension within the protagonist (played by Kyle MacLachlan, who also plays Agent Dale Cooper, the man called in to solve the mystery of Laura Palmer's death), to choose between his desire for the ‘good girl’ and the ‘bad' or 'fallen woman’ – so too are the characters in Twin Peaks torn between two image of Laura. Was she the sweet girl who volunteered for meals on wheels? Or the troubled teen who did coke and possibly turned tricks at an open-secret brothel catering to the rich and powerful men who ran the town? 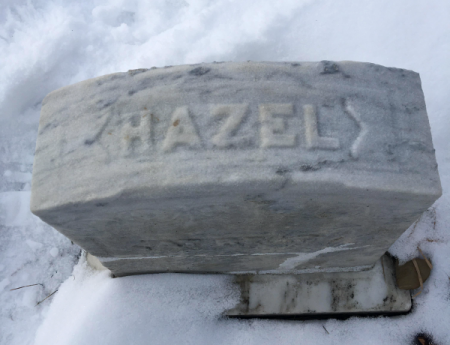 While the circumstances of Hazel Drew’s death inspired the universe of Twin Peaks, these were just broad strokes. Few other details about her life exist. Many of the records from that time were burned. If you try to find anything you will run up against a strangely absent body of evidence. Almost as if it was purposely destroyed to protect powerful people in the small town where she lived.

Despite this, the story is not over. The mystery is still in need of solving. The time is ripe for female voices from beyond the grave to rise above the din and set the record straight. Hazel Drew was young, beautiful and smart. These qualities gave her a leg up in life, at least for a time. She knew how to work the angles. She was successful at it—until she wasn't.

Something tells me Hazel Drew is not at rest. Loose ends remain unnervingly frayed.