Whenever I heard the word ‘transgressive,’ I always thought of it as something like… you know, you’ll read Chuck Palahniuk, Irving Welsh, Brett Easton Ellis — those are the big names you hear. You’re also told they’re very LGBT-friendly authors, but then, when I was reading that stuff, I’m like, ‘Okay, but where’s the gay sex?'

— Damien Ark, author of Fucked Up

When American novelist James Robert Baker hanged himself in his garage on November 5th, 1997, it sent ripples to waves, even across the pond; prompting the Gay Times in the U.K. to eulogize in a wider-shot context: “Baker’s suicide is particularly tragic because it robs American gay writing of a refreshingly distinctive voice quite unlike the po(ker)-faced prose of so many of his contemporaries.”

During high school, Baker submerged himself in the Los Angeles gay teen club underground, living in fear his abusive father would find out. In fact, his father hired a private investigator to stalk young Baker, to deduce whether he was having an affair with a male neighbor. It’s believed this family dynamic set the tone for most of his work: gay men versus the world, a specific blueprint for his first book, Adrenaline (1985) and his last print novel, Tim and Pete (1993). While the novels Testosterone and Anarchy were released posthumously, his legacy begs focus on those aforementioned works bookending his life, their Bobby and Clyde dynamics establishing a top and bottom to his career of careening bloodshot vision. 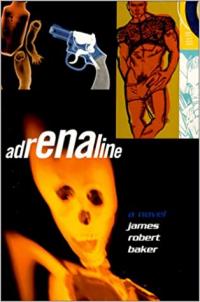 (It’s telling that his two mid-period novels, Boy Wonder and Fuel-Injected Dreams, would be his attempt at the mainstream. Even more revealing of culture’s gay prejudice: in these, his best-selling efforts, he erased all gay content, save his catty Technicolor camp smeared throughout so you couldn’t forget who had written them.)

Writing his first book under the pseudonym James Dillinger allowed a protective shield for Adrenaline to be the uncompromising, hyper-violent, hyper-sexual, and well, just plain hyperactive debut that it was; to hell with daddy or some coward PI peeping through his window. Adrenaline is an intricately layered, hardboiled romp through seedy Boystown Los Angeles and Orange County that initially pops off at Griffith Park, L.A.’s notorious cruising locale.

What begins as a casual hook up for Nick and Jeff quickly becomes a life, death or prison proposition. Ignorant to what is merely the high-volume passion of two men consensually getting it on at Jeff’s apartment, his church lady neighbor hears it as one man killing another. As she promptly calls the LAPD, we zoom in on two gay bashing cops, Burge and Rodriquez, taking the call; then, explicit exposition on their own closeted Tom of Finland antics — which makes their cognitive-dissonant behavior that follows that much more compelling, if not terrifying. When they break the door down, Jeff and Nick are caught in their private throes of passion. It’s as if the cops are turned on, in a sadomasochistic fashion, their suppressed depravity threatening to kill them in the most degrading way. The dialogue here is barking, yet breathless. When Nick and Jeff manage to turn the cop’s gun on him, it escalates to a hostage scenario when they were only trying to save their own lives. It sours further when the gun goes off, killing the cop.

Thus triggers a domino effect, following the at-large fugitives through the bathhouses and dance clubs to both hide and move like sharks; their only hope is to find Jeff’s lawyer friend Harvey Berringer, a gay man who will be sympathetic to their fuse-sizzling case; all while the LAPD is covering even larger swathes of ground, closing in on them. The lovers become both persecuted folk heroes and Manson-esque sodomites to the public, as suburban religious lynch mobs form alongside the safety of their intricate gay network. Adrenaline is a harrowing, romantic, ridiculous, intelligent, political, hilarious neo-noir page-turner that I have a difficult time comparing to anything else; until I think of Tim and Pete.

“Tim and Pete is a novel with two distinct sections,” says Graham Irvin, assistant editor of X-Ray Lit Mag. “The first 200 pages they travel through L.A. discussing how music, drugs, and sex was better in the eighties. And the last sixty pages, where the titular couple decide to help domestic terrorists kill Christian fundamentalists. But it works — it really works. It’s an amazing book.”

If Adrenaline was Baker’s napalm-noir, toss-it-all-at-the-wall-to-see-what-sticks-or-drips, Tim and Pete is a more laser-focused final statement, full of disarming romance and breathtaking, inventive danger. It’s an AIDS-era declaration of war against Republican prejudice and neo-liberal insincerity; only Queer Nation ACT-UP could have never dreamed about revenge fantasies this brutal and uncompromising.

Like Adrenaline, it’s another odd-ysee through Southern California’s cultural wasteland, but Tim and Pete finds its namesake lovers amongst post-riot Los Angeles, exploring the desolation of burnt-out intersections and bathhouses, now condemned. Baker allows his two protagonists to be more pensive here, traversing Babylon at their own pace; as it’s not the LAPD breathing down their necks — it’s the threat of AIDS, a subject that seems to always skid-out then burn-rubber back to dominate every conversation in their smart, catty, and dire dialogue. “Kitsch and black humor taken into full circle back to seriousness — that was Pete’s specialty.”

The two ex-lovers repel and attract through their travels to get Pete to his gig. He plays in an alternative-rock band called Drunken Ship, whose most popular song calls for the assassination of right-wing figures (who, you must remember, not only neglected the AIDS epidemic, but claimed it was “God’s will” to rid the world of the threatened demographic):

“The power of negative prayer! The waves of hate aimed at us for so many years finally manifested on the physical plane,” says Pete, desperately trying to make sense of the illness’s wildfire across the queer community.

Like many at the time, Tim and Pete confide they’re terrified to get tested. They retrace their steps with friends and partners who have since succumbed to the epidemic, creating a slow-burn that swings from paranoia to denial. The reunion of these two ex-lovers is fraught, but the intimacy churns with every step, unbeknownst they’re forging a renewed bond of higher-stake context. As they cover ground, they vent about the state of gay affairs, foreshadowing the extremes to follow: “All this shit about positive gay images. Who’s going to decide what that means? And how dare they?” 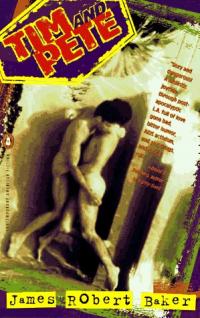 It’s a revolutionary conversation, passing the time on their erratic path which leads them to a hideout inhabited by a gang of “anarchistic queers who have abandoned the path of non-violence.” The leader, Glenn, tells Pete that it’s his band’s call-to-arms anthem has inspired them to bring the collective’s violent revenge fantasy to fruition. The rest of the HIV-positive intravenous-methamphetamine gang is introduced, along with their plastique IRA-modeled bombs and firearms to carry out an all-out attack on a Republican church service where Ronald and Nancy Reagan will be in attendance. Tim and Pete are initially disgusted, then intrigued, then seduced into the assassination fray. The protagonists then re-route the attack to La Jolla, to an even bigger Republican event that could eliminate a whole generation of anti-gay lawmakers — and Pete is privy to it since his own mother is having an affair with the main organizer of the fundraiser.

Without spoiling, I'll say Baker pulls a master-stroke at the novel’s climax: he brings the catharsis of the gang’s subversive fantasy to life — by embedding it into your imagination — while saving Tim and Pete from a point of no return. The fact that Baker was able to go to these lengths, where none of his contemporaries had the guts to go, is a grand statement in itself; an interpretive reaction to society turning its back on the vital yet endangered gay community.

While it’s now considered his swan song masterpiece, the novel was met with hostile reviews, due its advocacy of political assassination and street-level terrorism. Baker remained strategically evasive, yet unapologetic: “I think assassination does change things… But I’m not really calling for violence. It’s a novel, not a position paper.” When interviewed by Axion Grafix in 2006, he elaborated on the novel’s intent.

“…on a larger level, one of the strategies of the book is to re-exteriorize homophobia. I think American culture has done a very good job of convincing gays to interiorize homophobia, convince them if they're angry they should see a therapist for some sort of personal problem. The characters in Tim and Pete tend to aim their anger at the representatives of a homophobic culture rather than at each other — which is another thing gays are very good at, taking it out on each other. We have our own ways of doing that the same way that blacks, the Crips and the Bloods, take it out on each other.”

The tragic irony is that Tim and Pete not only became Baker’s own cross to bear, but inadvertently proved culture’s homophobic hypocrisies — no publisher would touch him after its harsh reception. He became known as “The Last Angry Gay Man” as he continued writing, circumventing publisher resistance by self-releasing the short novella Right Wing on the internet. But financial precariousness followed in the wake of Tim and Pete’s shadow, setting Baker on a hasty emotional spiral, until he died from asphyxiation in his garage in November of 1997.

Get Adrenaline at Amazon

Get Tim and Pete at Amazon

To Haunt the Mind: Poet Donna Lynch on "Girls From the County"

A Nonfiction Roundup Both Wondrous and Beautiful