I haven’t written in months. I’m a full-time publisher and new dad, and when I have free time it’s spent playing music. I’m tired but feeling good. I just finished up what was basically a publishing tour, culminating with StokerCon in Denver last week. I'm here to share the highs, lows, and in-betweens of what I did in Denver while feeling dead.

First, I gotta say I’m not as involved with the HWA as a publisher who puts out horror books should be. I always forget to renew my membership. Truth is, being a press that publishes literary fiction, indie lit, non-fiction, poetry, and even arts books is a lot to juggle. I will say though, as someone who is part of all the different lit tribes – I love the horror community the best. They really are the most chill and caring writers, publishers, and readers. Seriously, the horror people are the greatest. I truly feel at home when I’m hanging with them. I think it’s because they look at the literal horror in the world and confront it. They don’t try to beautify it, make it ironic, or avoid it—they live in it, and their empathy and care for one another shows.

Anyways, after a way too early flight, I got to Denver, where I slept for a day, met with a poet we're publishing, and then slept for another half a day before heading over to the Curtis Hotel from my Airbnb. It's a nice hotel with elevators from hell. My only real complaint about the place is those fucking elevators. Actually, they aren't from hell, they're more like the elevators you’d find in purgatory. They work but take forever and are really, really small.

Instead of going to panels like a good publisher, I got drinks with horror writers to kick things off. I love panels, don’t get me wrong, but sometimes the best panel is just sitting with V. Castro, Cina Peyalo, and Gemma Amor at the bar. Wearing the hats of both a writer and publisher is exhausting, but being around friends and their enthusiasm for the horror genre gave me a much needed jolt of positive energy. Good cons are about good people, and StokerCon is full of some of the best—not just in the genre, but the book world itself. Talking to these three talented authors to start off the conference was perfect. I also got to talk with Eric LaRocca and his partner, Ali (#TeamAli.) It was so much fun to discuss the craft and our love of horror. 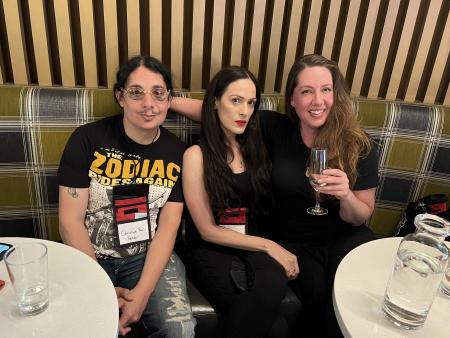 Walking around StokerCon is a highlight in itself… Jesus, this is already turning into a name-drop article, but it’s nice to just run into Brian Keene and talk about family and life. He’s basically my book dad. StokerCon is really about the connections. Look, I'm not some Boomer who thinks the internet and social media are the devil—they’re great—but they will never match the magic energy of seeing people irl. Also, StokerCon isn't just straight up horror people, I got to catch up with the Bizarro crew: Rose O’Keefe, John Skipp, Laura Lee Bahr, Carlton Mellick III (google him), Danger Slater, and Michael Allen Rose. It’s these connections that make traveling to cons worth the effort, even though it’s getting harder and harder for me the older I get.

Look, StokerCon is amazing, and I will be there next year. I know I pitched a journalistic piece about the event, but I feel this essay turning into something else. Cons can be addictive. Even misanthropic antisocial writers like Autumn Christian can enjoy a good writing event. We had a lot of fun at the LA Times Book Festival. At StokerCon it really hit me that with having a newborn and a band and a press to run, I am going to have to pick and choose the cons I go to during the next couple years. Keene, being the book dad that he is, took me aside and was like, you need to slow down, and he’s right. I am still tired, as I write this piece after playing a show and recording the final tracks of my band’s debut album.

The last 5 weeks have been crazy. It kicked off with AWP in Philly. The following week it was Scares That Care in Virginia, with a stop in NYC. Then I did the LA Times Book Festival, went back to NYC, and then made my way to StokerCon. After Covid, with everything starting up again, I wanted to get the press back out there. It was a great experience, but I really missed my newborn. Having a kid and then doing a bunch of cons and festivals is a rollercoaster ride of highs and lows that ends with you being beyond exhausted physically and emotionally. It's not a sustainable lifestyle.

But enough of this personal detour, let me get back to StokerCon. SC is going to make the cut of the few events I attend in the upcoming years.

Why StokerCon? Yes, it’s about the people, but I also think the organization is doing an amazing job of building a healthy community for the genre. I see them trying to be more inclusive and diverse. They are creating a place for horror writers to improve their craft and feel like part of something bigger than themselves. There’s nothing better than being around a group fueled by mutual inspiration.

It's also great place for publishers. I met an author who blew me away, and we are going to do a collection together for CLASH Books. These are the organic moments you just can’t plan. And hey, I even made it to a few panels and readings, which were awesome. The organizers did an excellent job. The three days flew by and I felt energized to get back to publishing and even inspired to write fiction again, when I have time. In the end that is what a great con does. So next year the wife, the kid and me are going to StokerCon. It’s a con that works for the whole family.

Selling Books in an Ocean of Sweat and Malort: Texas Frightmare Weekend 2014