For decades I was a musician first, writer second — though I’m grateful that has flipped over the last five years. Since writing is a solitary endeavor, I feel the energy a writer expends is reciprocated in greater, more immediate reward — even if it’s only confined to our private vantage. Since the lifestyle of a musician seems to inexplicably require wasting large chunks of time where you’re not actually doing the “thing,” it’s almost unfair to compare the two crafts. But I assumed other musicians wanted to write if they weren’t already doing it, considering the roads some of the below listed luminaries have forged for us. Unfortunately, the longer I was steeped in music, the uglier I awakened to musicians lost in their own plots who couldn’t carry a literary conversation to save their lives. I read some of their lyrics and suffered a face-palm inflicted aneurism.

I narrowed this list down to musicians who have inspired me personally, who went beyond the obligatory rock memoir to offer something far more unique and committed — whether fiction, bona-fide poetry, or more apocryphal experimentations — to suggest music shouldn’t be the end-all to self-expression. For a lot of us it’s just the foreword.

By all means, this is not a complete list — and very white, I realize — so please turn me on to anyone I’m missing in the comments.
And no, Morrissey — even after you strong-armed your memoir to be released through Penguin Classics, you still didn't make my list.

Once punk hit L.A. in the late 70s, Chris Desjardins (he shortened it to "D") was already a scriptwriter, noir pulp scribe, rock journalist and an accomplished poet — giving him a more literate advantage over most other punks. The result was his forming one of the city’s most uniquely underrated bands, The Flesheaters; a death-obsessed, swamp infused punk blues supergroup. Taking equal cues from French literary fatalists like Artaud and Celine as much as Captain Beefheart, the group was an onstage exorcism propelled by free-jazz roadhouse workouts. Chris continued to write prose and poetry, compiled in his completist tome A Minute to Pray, A Second to Die (New Texture, 2009). Since then, we’ve been graced with a series of his brutal noir pulp offerings like Tightrope on Fire (Poison Fang Books, 2013) and Dragon Wheel Splendor and Other Stories of Violence and Dread (New Texture, 2011).

Get A Minute to Pray, A Second to Die at Bookshop or Amazon

Following his 1978 debut at the Memphis Orpheum Theater where he chain-sawed his guitar in half, Tav Falco formed the art-damage band Panther Burns with Boxtops/Big Star legend Alex Chilton. Through revolving line-ups he's been shoving traditional music through the meat-grinder for the last four decades and counting. It’s the sound of American roots music falling down a long flight of stairs, only to stand back up with a killer suit, perfect coif, and a witty comeback. Another multi-media madman, Tav proved his literary prowess in 2010 with Ghosts Behind the Sun: Splendor, Enigma and Death (Creation Books). It’s a haunted odyssey through the American South’s musical shadow that travels otherworlds beyond the typical memoir — a pile-up at the intersection of Hollywood Babylon littered with apocryphal tangents of Borges. I was fortunate enough to have had Tav write the foreword to my twin-novel Virgins in Reverse/The Intrusion — I consider his outrageous prose within that intro just as vital as the rest of the book.

Get Ghosts Behind the Sun: Splendor, Enigma and Death ​at Bookshop or Amazon

More than any other on this list, Patti wore her literary influences fiercely on her sleeve, often shouting out authors in breakdowns of her earlier songs. A poet before she sang a note, she released her debut chapbook Witt in 1973, then the extremely obscure Ha Ha Houdini (released in 1977, written in 1972). When her debut album Horses was released in 1975, she was already firmly entrenched in NYC post-beat literati, claiming confidants like Ginsburg and Burroughs among her mentors. With over ten books under her belt, her beyond memoir Just Kids was a bestseller in 2010.

Get Just Kids ​at Bookshop or Amazon 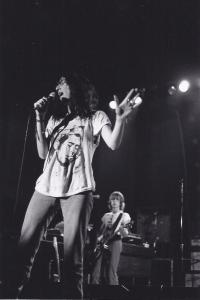 It was clear Cave was coming from a literary threshold with his earliest lyrics in The Boys Next Door/The Birthday Party, and the band’s confrontational performances definitely picked up where Artuad’s The Theater and Its Double left off. But he went all in with And the Ass Saw the Angel (Black Spring Press, 1989). Replete with Biblical splendor, it’s a reimagined grotesque Southern Gothic novel in the spirit of Faulkner. He wrote the book in manic, meth-induced fever with turns of phrasing that could give you whiplash. His follow-up, The Death of Bunny Monroe (Faber and Faber, 2009), is a more satirical romp whose main character has an unhealthy obsession with Avril Lavigne, among other things.

Get And the Ass Saw the Angel ​at Bookshop or Amazon

The late 70s gutter days of NYC No-Wave spawned Lunch’s atonal attack squad Teenage Jesus and The Jerks. A solo career followed, morphing her into an architect of modern transgressive feminist spoken word. Notoriously confrontational, the words in her Exene Cervenka collab Adulterer’s Anonymous (Last Gasp, 1982) can barely be contained on the page. Her follow-up, Incriminating Evidence (Last Gasp, 1992) is her best written work, in my opinion — it's all her, all night, all CAPS! Only Lunch could pull that kind of thing off.

Get Incriminating Evidence at Bookshop or Amazon

As the bass player of one of indie rock’s most prolific and notoriously drunkest bands, Greer also straddled rock journalism in the formative years at Spin Magazine. When asked to write the definitive story on the death of his close friend Kurt Cobain in 1994, he demanded it’d be on his own terms. But when push came to shove, instead of “picking over his bones” like he was expected to, he quit. Greer’s astounding experimental novel Artificial Light (Akashic Books, 2006) is a clue what that story within a story could have been, unabridged and free associated. Richard Meltzer boasted it as “beating the bejeezus out of the last dozen Thomas Pynchons, the last nineteen Don DeLillos, and the last forty-three Kurt Vonneguts.” The novel was followed by a flurry of others before he settled into screenwriting films like Unsane (2018), directed by Steven Soderbergh.

Get Artificial Light at Bookshop or Amazon

A celebrated poet since his teen years, Carroll is best known for his particularly athletic gay hustling junkie novel The Basketball Diaries (Penguin, 1978), later adapted into the 1995 film starring Leonardo DiCaprio. Following the path of Patti Smith, she urged him to form a band. 1980 ushered in the release of Catholic Boy, the debut album from The Jim Carroll Band, featuring rock n’ roll’s best mass obituary of all time, “People Who Died.” You haven’t lived until you’ve heard it.

Get The Basketball Diaries at Bookshop or Amazon

Childish always fashioned himself a defiant anti-musician, highlighting the primitive, rowdy spirit behind his record-breaking prolific punk-garage output instead of technical ability. “Talent is vastly overrated!” he said. But when he wrote his debut novel My Fault (Virgin Books, 2005), he proved what a seriously literate motherfucker he was with its stark, confrontational prose about a childhood fraught with sexual abuse and mental illness. It was followed with Notebooks of a Naked Youth (Sun Dog, 1997) and nine other books of prose and poetry since.

Get My Fault at Amazon 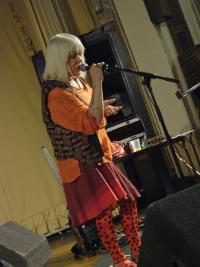 In the mid-late 70s their trailblazing noise-orgy group Throbbing Gristle forged the industrial music genre (their early record label, Industrial Records, no doubt had much to do with the tag). When they later formed Psychic TV in the 80s, they flirted further with the whole “band as a cult” concept, penning the hugely influential Psychick Bible: The Apocryphal Scriptures of Genesis Breyer P-Orridge and Thee Third Mind of Thee Temple of Psychick Youth. This ignited a world-wide network of devotees who conspired to re-engineer culture through sex magic, gender defiance, language scrambling, and focused drug consumption to alter reality for an exciting new world. The book is based largely on the teachings of Crowley and LaVey with synapses connecting to William Burroughs and Brion Gysin, adding a further literary adherence that put P-Orridge among their trajectory in the counter-culture eye.

Get Psychick Bible at Bookshop or Amazon

After her and future bandmate/husband John Doe met at L.A.’s Beyond Baroque’s poetry workshop in the late 70s, the two formed the beloved Ramones-meets- rockabilly punk band X, bringing a strong literary bend to their manic stanzas. She released her first book Adulterers Anonymous (a collaboration with Lydia Lunch) in 1982. Her 1992 follow-up collaboration Just Another War (Bedrock/2.13.62) with photographer Kenneth Jarecke was a visual/poetic indictment of the Gulf War and American Imperialism.

Get Just Another War at Amazon

By far the most mysterious one on the list, Nick Blinko fronts the British death-rock anarcho-punk band Rudimentary Peni. Equally revered for their down-tuned hyperactive dirges as they are for Blinko’s insane tweaker-esque artwork, Rudimentary Peni attacked politics the same way you’d imagine them attacking you in a cemetery at midnight. In 1988 they recorded the concept album Cacophony where they tapped into the madness of both Poe and Lovecraft. Then in 1995, Blinko wrote The Primal Screamer (Spare Change Books, 1995), an epistolary horror novel many believe is a thin veil into his own psychosis.

Get The Primal Screamer at Bookshop or Amazon

Decades before he picked up his nylon-string guitar, Cohen was first an acclaimed poet, then a novelist with The Favorite Game (1963) and Beautiful Losers (1966), the latter which he nearly went mad writing in Greece. Eventually he would put his poem “Suzanne” to six-strings, his voice in yearning musical candor. He didn’t initially consider it a real song until it became a hit for Judy Collins in 1976. After an extended bout of stage fright, Cohen finally caught the bug, releasing fifteen albums of sublime poetic beauty until his death in 2016.

Get Beautiful Losers at Bookshop or Amazon

As the editor of British science fiction magazine New Worlds from 1964-1971 (then again from 1976-1996), he helped nourish the sci-fi new wave movement which eventually gave birth to the cyberpunk genre. His music project Michael Moorcock and the Deep Fix would lead to collaborations with both Blue Oyster Cult and Hawkwind (!), the latter of which he was “producer” for a series of sci-fi novels that expanded on the band’s space-rock theme.

Get Elric of Melnibone at Bookshop or Amazon

An Interview with Poet/Veteran J.B. Stevens

Horror Author V. Castro: "Why Write About Werewolves When My Ancestors Revered Jaguars?"