It's that time of year again. Shoppers are now out in full force, being rude to anyone and everyone they meet. TVs, drones, and expensive toys kids won't care about in a year are accumulating under faux-pine trees festooned with lights and ornaments. Little Jesus babies are miraculously spawning across church and residential lawns, and soon every channel on the local and cable spectrum will ceaselessly ram A Christmas Story down our collective throats (I've heard "You'll shoot your eye out" so many times now, the words have lost all meaning).

But while everyone else celebrates this holiday season the traditional way, us weirdoes will be doing things a bit differently. One of our time-honored traditions involves consuming Christmas-themed tales of the strange, macabre and downright uncouth. Last year I detailed fifteen twisted holiday narratives for your reading/viewing pleasure, but this year I've pared the list down to twelve, because, you know, twelve days of Christmas and all that. At this point we have something like ten days until the 25th, so you better get crackin'. 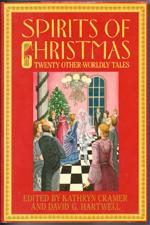 This anthology from 1989—edited by Kathryn Cramer and David G. Hartwell of Year's Best Fantasy fame—follows in the now mostly forgotten tradition of telling ghost stories either on Christmas Eve or Day. The twist here is, every story contained in the volume features a Holiday backdrop. As Hartwell notes in his introduction:

Highlights include Gene Wolfe's watery tale "How The Bishop Sailed to Inniskeen," Elizabeth Bowen's surreal and absurd "Green Holly," and Michael Swanwick's dark science-fiction story "A Midwinter's Tale." Spirits of Christmas is currently out of print, but you can get used copies via Amazon for cheap, and I recommend you do. 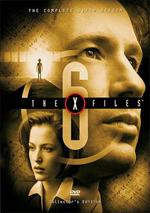 2. The X-Files Season 6, Episode 6: "How The Ghosts Stole Christmas"

At this stage in The X-Files, storylines were starting to get a little silly (though nowhere near as silly and downright stupid as in season seven). "How The Ghosts Stole Christmas" isn't concerned so much with the show's usual blend of sci-fi and horror, but it is an excellent example of its comedic side. Written and directed by series creator Chris Carter, the episode follows Mulder and Scully's investigation of an archetypical haunted house. Of course, the ghosts turn out to be real (and played by Ed Asner and Lily Tomlin, of all people). Do they give the Agents a good Christmas scare? Of course. They also act as pseudo-psychoanalysts and try to root out the causes of Mulder and Scully's unacknowledged sexual tension. Weird, wild stuff, to be sure. 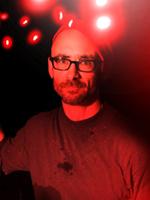 3. "How The Jew Saved Christmas" by Chuck Palahniuk

Our friend Chuck Palahniuk wrote his first yuletide-themed excursion into the dregs of human morality exclusively for BlackBook magazine last year. Set against the backdrop of a monotonous, soul-sucking retail environment, the story features two morally bankrupt main characters who suspect with heightening degrees of paranoia that innocent Secret Santa gifts aren't so innocent, ending with a disgusting display of revenge followed by a surprisingly sweet denouement. This is what Palahniuk does best—he leads us down one path, then pulls the rug out from under us. And yes, he manages to gross us out here too.

Read "How The Jew Saved Christmas" 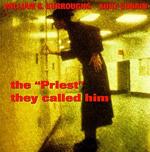 4. "The 'Priest' They Called Him" by William S. Burroughs and Kurt Cobain

This collaboration between the beat poet and Nirvana frontman features a story from Burroughs's 1973 short story collection Exterminator!, read by the author. Cobain provides a fuzzy, jarring rendition of "Silent Night" with some nasty free noise experimentation for good measure. The tale follows an old junky known as the Priest, who's looking to get his fix on Christmas Eve, but has no money. He steals an unoccupied briefcase that he hopes to sell...only to find a pair of severed human legs inside. Cheery stuff indeed!

Also see The Junky's Christmas, a reworking of the same story, which Francis Ford Coppola and VH-1 produced as a claymation short in the tradition of Rudolph the Red-Nosed Reindeer and Santa Claus Is Coming To Town, those beloved Bass-Rankin specials. 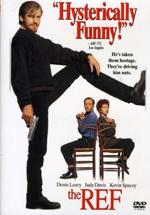 It's Christmas Eve, and foulmouthed jewel thief Gus (Denis Leary) is on the lam after a botched burglary. With nothing better to do, every cop in town is after him, and Gus needs a place to hide. He kidnaps foulmouthed couple Caroline and Lloyd (Judy Davis and Kevin Spacey, respectively). Their marriage is crumbling, largely due to their non-stop, vitriolic bickering. Throw in their blackmailing, Baby Jesus-stealing son Jesse, a nasty extended family hiding behind the facade of upper-middle-class normality, a homophobic sheriff, and a Santa with a penchant for back-handed compliments and testiness toward cookie-offering kids, and you've got yourself one excellent, dysfunctional Christmas tale. 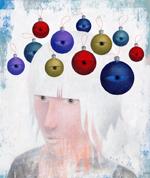 6. "The Ghosts of Christmas" by Paul Cornell

The first in a series of Christmas-themed short stories and novellas produced by Tor.com, this science fiction tale follows a brilliant scientist on the verge of unlocking the secret of time travel via a linking of one's own neural pathways, both past, present and future. Due to give birth sometime later in the day, and fearful she may be a terrible mother (given her history with her mom), the unnamed protagonist uses her own technology to revisit her childhood as well as see what's in store for her later. The catch to this tech? Users can only visit the same day they strap themselves into the "time machine"—and our scientist just happens to be traveling on Christmas Day. With "Ghosts," Cornell explores the strange and wonderful dynamic between parent and child, the notion that a person will inflict the same suffering they endured from their parents on their own children, and whether or not precognition of future events can really prevent them from happening. A somewhat sad but altogether fulfilling read.

Read "The Ghosts of Christmas" 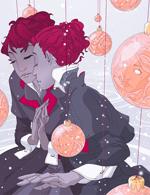 7. "The Christmas Show" by Pat Cadigan

Tor Christmas story number two, this one much lighter than "The Ghosts of Christmas." In Cadigan's tale, cursed sisters Dita and Coco travel the country putting on spectacular shows for small town citizens, their specialty being a stellar adaptation of Dickens's A Christmas Carol—featuring actual ghosts playing the spirits that haunt Ebenezer Scrooge. But as much trouble as some of these prima donna spooks give the sisters, their real challenge is getting local man and ex-marine Steve Rock, who they've cast as Scrooge, to loosen up. Black humor ensues. 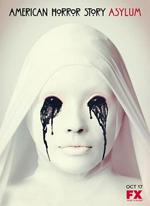 Nothing says twisted Christmas like a deranged Santa. I wrote about a particularly awesome one from Tales From The Crypt last year, but the comically insane Saint Nick in that narrative has nothing on serial killer Leigh Emerson (Ian McShane), who ruthlessly murdered eighteen people across five different families in one night. Much of AHS doesn't unnerve me—I see this series as more of a serio-comic homage to the horror genre—but this killer Santa is definitely disturbing, because his violent unpredictability just oozes off the screen. What could have been just another nod to a cliché becomes something truly original and terrifying here. Be sure to check it out. 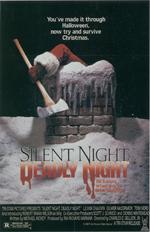 Okay, overall I don't like this movie very much. But my distaste for it has nothing to do with the whole "how dare they make a slasher movie centered around a spotless family holiday" hubbub that plagued the film upon its release. It's just that I'm not big on slasher pics in general, and there is some pretty nasty misogyny underlining this narrative. Even still, every time I see a mall Santa, I can't help but say "PUNISH!" under my breath, or to my fiancée, which makes her giggle. Plus, I have to give props for the ludicrously lurid title and the poster image of Old Saint Nick clutching an axe as he climbs down the chimney. 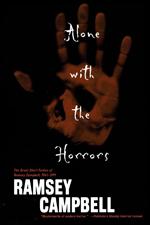 10. "The Chimney" by Ramsey Campbell

I've noticed Ramsey Campbell writes children well, and this talent is on full display with "The Chimney." It's about a familiar subject—the boogeyman. Only this nightmare figure may actually be real, and a twisted, demonic representation of Santa Claus no less. The atmosphere will lure you into this dark world—you feel as though you're right there in the attic bedroom, hiding from this thing coming out of the fireplace. It's giving me chills just thinking about it. 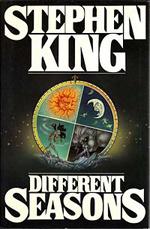 11. "The Breathing Method" by Stephen King

This spectacular yuletide tale of the macabre comes from King's novella collection Different Seasons. We have a framing story involving a not-so-secret but nonetheless hush-hush society of old men who gather every Thursday to tell unbelievable stories (which also happen to be true). Their gathering place—a luxurious and seemingly endless apartment in New York—may or may not be located on an earthly plane of existence, and their host is a shadowy figure if there ever was one. The society's penultimate event centers around the annual Christmas tale, and this year the resident gynecologist has one hell of a story for them—the titular "Breathing Method," which also takes place on Christmas and...well, I won't say anymore. 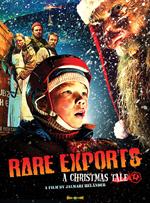 "The real Santa was totally different. The Coca-Cola Santa is just a hoax." So says the young protagonist Pietari in Rare Exports, a fantastic offbeat Christmas narrative from Finland. In the comments section from the Twisted Christmas column last year, damn near all of you expressed a desire to see this title on the list. I hadn't seen it then, so I checked it out. Now I understand. Among other themes, Rare Exports explores the homogenization of the Santa myth across time, changing him from a vengeful, child-abusing freak (just like his pal Krampus) to the jolly, cookie-munching present-giver we know today. The culprit? Commercialization and capitalism—and no one is safe! This film is one wild ride, and I recommend it highly.

Alright, that's it for this year. Be sure to add your own twisted, offbeat holiday picks in the comments section. And whatever you celebrate, have a good one!

10 Gift Ideas No Book Lover Can Live Without This Holiday Season
What Scares You? 30 Terrifying Horror Stories Straight Out Of Your Worst Nightmares

Joshua Chaplinsky from New York is reading a lot more during the quarantine December 15, 2014 - 11:43am

I love that Rare Exports is essentially a kid's movie, only packed with full-frontal old man nudity. You could never get away with that in America.

You can barely get away with full frontal man nudity in adult movies too.