Perhaps you’re just beginning to dip your toes into the vast and glittering waters of speculative fiction. Maybe you’ve been reading sci-fi and fantasy for a while, but your library tends to be stocked with the genre’s male greats. Or it could be that you’re hoping to line your bookshelf with feminism, cultural anthropology, Taoism, and philosophy. One way or another, you’ve found your way to one of science fiction and fantasy’s greatest voices, Ursula K. Le Guin — and you want to know more.

Le Guin is notoriously prolific, so she’s one of those authors that give readers pause as they ponder the best gateway to her bibliography. Her Earthsea series is an obvious choice, as it contains many of her most widely-known titles. But it’s not the only door available to you.

This post will give you with an overview of this literary great — and will offer a reading guide for better acquainting yourself with her works, which explored new frontiers and broke new ground.

Who is Ursula K. Le Guin?

Ursula K. Le Guin is an American author who’s been called a presider of speculative fiction. Her literary career spanned more than 60 years, starting with the publication of the poem "Folksong from the Montayna Province” in 1959, and ending with the poetry collection So Far So Good: Poems 2014–2018 in 2018 — published just three months before her death on January 22, 2018.

Along with being the first woman to win the Hugo and Nebula awards for best novel (for The Left Hand of Darkness), Le Guin leaves behind a legacy of beloved novels and short stories that tackle socio-political issues through a speculative lense. Indeed, Le Guin almost takes on the role of an investigative journalist, digging into the many different realities that could be, and presenting her findings through fiction — a medium which allows us to lower our inhibitions and suspend disbelief.

To get a more intimate and in-depth look at Le Guin, take a look at this farewell letter to her, penned by the also intimidable Margaret Atwood.

Now for the fun stuff! Le Guin's massive oeuvre might be intimidating, but there are, in general, only three Le Guin novels that come up time and again as THE books to start with. Here they are. 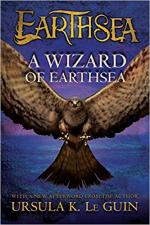 This is like exploring the works of Ernest Hemingway by reading A Farewell to Arms first. Or making Murder On the Orient Express your first Agatha Christie read. In other words, it’s a classic — every Le Guin fan’s bread and butter.

The story follows Ged, who is now the greatest sorcerer in all of Earthsea, but who was once an audacious youngster known as Sparrowhawk. In his youth, Sparrowhawk was perhaps ambitious to a fault (i.e. lifting the lid off long-held secrets and throwing the equilibrium of the magical world Earthsea off-kilter). We follow Sparrowhawk’s journey to bring peace and balance back to the world for the rest of the book— one that includes fights with dragons and close encounters with death.

A Wizard of Earthsea — which, fun fact, is often credited as a precursor to the Harry Potter series — incorporates two popular literary elements: it's a bildungsroman that also follows the hero’s journey monomyth. However, it’s a trendsetter in more ways than one: the hero in question is a protagonist of colour, and the novel subverts many of the tropes in traditional fantasy. This is part of what makes it a good place for new Le Guin readers to start: the social commentary is already woven into themes that feel familiar.

Why start here? It’s a classic. 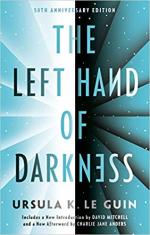 This award-winning novel may or may not be part of a large series known as The Hainish Cycle, which refers to a number of her books that take place in the same imagined universe (and connect to one another in various ways).

That said, in an FAQ that used to be hosted on LeGuin’s website, she wrote:

People write me nice letters asking what order they ought to read my science fiction books in — the ones that are called the Hainish or Ekumen cycle or saga or something. The thing is, they aren’t a cycle or a saga. They do not form a coherent history. There are some clear connections among them, yes, but also some extremely murky ones. And some great discontinuities…

In other words, while the novels of The Hainish Cycle do link to each other in one way or another, they ultimately each serve as standalone novels that can be read in any particular order.

That’s where The Left Hand of Darkness comes into play. The most famous of the Hainish books, it follows Genly Ai as he travels to the planet Gethen on behalf of the Ekumen — a confederation of planets located in the world of Hainish. It’s Genly’s responsibility to try and convince the Gethenians to align with the Ekumen. However, to make any kind of connection with the Gethenian people, he must first come to understand their culture which is highly influenced by the fact that Gethenians are ambisexual. In other words, their gender is entirely fluid.

Like A Wizard of Earthsea, The Left Hand of Darkness explores questions of identity and society — but in very different ways, and within a sci-fi frame.

Why start here? It’s her most critically acclaimed work. 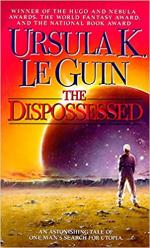 While Le Guin’s novels can be intensely political, offering unrelenting mirrors to the ills of our own world, they also brim with the gentle touch of an author who has poured passion into creating beautiful fictional worlds that readers can escape into. As a result, her critiques unspool delicately and slowly throughout the course of her narratives, welcoming readers aboard her train of thought, as opposed to shoving her observations in our faces. Le Guin seems acutely aware of the fact that some realities are better grasped as metaphors or in our periphery — that a spoonful of sugar helps the medicine go down, so to speak. Her ability to offer unflinching insight through allegorical sci-fi is on full display with The Dispossessed, which is another reason it’s a great potential gateway to the rest of her works.

In addition, it offers a good primer to the aforementioned Hainish Cycle. The main connection between the Hainish novels is the “ansible”: a device that allows instantaneous communication across interstellar distances. The Dispossessed follows Shevek, a physicist and the inventor of the ansible. Shevek is on a mission to reunite Anarres, a moon settled by utopian anarchists, and Urras, a planet of warring nations and fractured political ideologies (sound familiar?) — and Anarres’ colonizer. Shevek’s quest forces him to confront seemingly unanswerable questions about the nature of civilization and humanity, and how the seeds of hatred that keep humanity from unity start — and sprout.

Why start here? It’s offers the best introduction into the Hainish Cycle.

Of course, just because A Wizard of Earthsea. The Left Hand of Darkness, and The Dispossessed are widely suggested as entry points to the Le Guin canon, that doesn’t mean they’re the only books of hers worth noting.

Here are some other Le Guin titles to add to your library:

As Le Guin once said: “The unread story is not a story; it is little black marks on wood pulp. The reader, reading it, makes it live: a live thing, a story.” So what are you waiting for? It’s time to start reading.

Themes of Pedophilia in the Works of Piers Anthony