godless.com and the Evolution of Publishing

godless.com is an ebook distribution platform that includes exclusive content, content also available on Amazon, and a few passthrough links to content godless authors have on Amazon. There is merchandise as well as podcasts. There are original series created by a wide range of authors. The site leans toward extreme horror and splatterpunk, but does include other genres. As time goes on, the offerings have become more diverse. On average, prices tend to be lower than similar books on Amazon. godless is also home to a number of banned books and works that have little chance in the mainstream market. Many godless exclusives are shorter works for lower prices.

godless.com is the brainchild of Drew Stepek. Now who is Drew Stepek? I don’t know, exactly. He’s been really great to me as an author with exclusive work on godless. I’ve seen him in videos and interviews since godless was launched, so I have to concede the truth, no matter how unlikely, that Drew is a real person. He seems to have existed in the publishing and entertainment world forever, yet it also feels like he came out of nowhere.

On the surface, “godless” as a name would seem to imply an anti-religious bent. Pushing extreme horror might contribute to that assumption. As I understand it, as a person of faith who distributes my work through godless.com, Stepek uses the name from a standpoint of “having no master.” godless.com is presented as an alternative to submitting to the rules and restrictions of Amazon. This is meant to be a place where work that goes beyond normal boundaries can find a home. Where readers can find something new.

I believe the success of godless thus far can teach us some lessons about the evolution of publishing.

godless.com is presented as an alternative to submitting to the rules and restrictions of Amazon. This is meant to be a place where work that goes beyond normal boundaries can find a home.

When I talk about ebook distribution platforms other than Amazon, the degree to which your eyes roll is probably directly proportional to how long you have been writing and publishing in the 21st century. There have been a bunch of these types of platforms. Some are still around. Many authors have gone from being exclusive with Kindle to “going wide,” offering their ebooks elsewhere. Many of those authors have gone back to being exclusive because their earnings outside Amazon did not exceed the pennies they got for page reads. Success on these alternate platforms has not been the norm for most authors.

godless.com’s recent explosion on the scene is different. Indie authors at many different levels of success have found readers and sold books through godless. They tend to experience a more sustained level of sales over time. Promotions by godless rejuvenate sales regularly. godless is the rare example of an Amazon alternative that produces results for a wider range of authors.

While extreme horror is not all you can find on godless, very early on, Stepek connected with the extreme horror groups on social media as he recruited authors and readers to the site. The site has a compelling look, easy navigation, and interesting content. That, of course, helps keep those eyes.

There have been lots of shiny new trinkets that only kept people’s attention for a short while. What Stepek has done well is create a community that overlaps not just interests, but existing bonds within these genres among creators, readers, and more. People come to godless to find something new. They enjoy what they get, share it with each other, and engage with more content. Authors and readers have developed a sense of ownership. Authors, even those with more modest sales, feel appreciated by readers and Stepek himself, as he helps them get set up on his platform.

godless has become a thing people are a part of as opposed to just a commercial site they use.

There is a valid debate to be had about whether the trend of lowering prices is hurting authors as a whole. Drew Stepek has expressed the opinion that in the era of streaming, social media, and in-app purchases, authors might benefit from adapting some of their work to this reality. He has tapped into that market for shorter and cheaper entertainment.

Stories that run shorter have found a home on godless, and the platform's readership is snatching them up. For the price of a paperback or two, you can purchase seven to ten stories from as many authors. This means more writers are getting your eyes on their work. Then, if you connect with a specific author, you can go and buy the rest of their stuff— including the longer, full-priced works. It is a game of volume, which is same game authors have been playing throughout the history of publishing.

Stepek brings a bright and bold style to his personal covers. Other authors such as John Wayne Comunale have embraced this aesthetic as well, with great success. There is a cohesive look to the site and many of the books that demands the eye. Darker palettes are not excluded—even covers without dayglo color schemes have designs that strike interest. There is an embrace of the idea that you can sell a book by its cover.

5. Someone Has to Make it Work 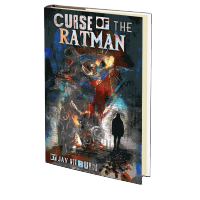 A number of past attempts to create an alternative to the big platforms have had no public face to lead them. They were just another site among many. Stepek has stepped up to advocate for his site and its authors.

He did a 31 Days of godless campaign in October. Several books were released over those thirty-one days. Stepek approached me personally to ask if I had anything I’d like to release. I had a novella that was edited and I was planning to release on godless in the future. He encouraged me to come in on the promotion. I went ahead and commissioned a cover and got it formatted. Stepek set up the rest. As a result, I capitalized on sales I wouldn’t have otherwise.

Amazon isn’t going to call me to tell me they want to release and promote a new book for me. Without the enthusiasm and initiative of the founder, none of this would have happened.

6. There is a Potential Market for Everything

One trend in any form of successful entertainment is for the field of work to narrow. When one thing sells and another doesn’t, the money follows the winner. Potential in something different is sometimes seen, and good content sometimes finds its way through the barriers, but this narrowing does not encourage experimentation in the market.

What godless.com’s success shows is that the democratization of media and micro markets available throughout the splintering Internet provide a potential for stories outside the mainstream to find an audience.

There are millions upon millions of readers in the world today, no matter how much the doomsayers claim reading is on death’s door. You don’t need all those millions to make your work a success. You need just enough. Just enough to pay for the cost of book is a good start. Just enough to make the book profitable is better. Just enough to build something more out of your author platform is great.

7. There are No Guarantees.

Drew Stepek, assuming he is a mortal human as he might appear to be in videos, is working hard at making godless a success because he knows there are no guarantees. He has a community of creators and readers around what he has created, but that doesn’t lock down future success. Authors are making money, readers are responding to the work, and the site is growing. Whether it thrives to become an institution in and of itself is left to be seen.

This is the reality of publishing though. Especially as the industry evolves faster and faster alongside game-changing technologies. Some will adapt while others are left behind. The path to success will change faster than the shift from one generation to another. It will change many times. A site like godless and the innovation of a person like Drew Stepek gives us a rare window into where things are going, and how we might get there before we are left behind.

Can The Kindle Add Fuel To The Fire Of The Public Library System?

Why Independent Bookstores Matter: A Rebuttal To Slate's Farhad Manjoo

Exploring the Digital Wilds: Expanding Our Approach to Novels

The Impact of Scares That Care

When Writer's Block is Connected to Depression

March is the Perfect Month to Give up on Your Goals for the Year—But Hold on!