What I Learned Being Mandy De Sandra

About 3 and a half years ago, two college students started churning out kindle singles about women having sex with dinosaurs. I found their success a little depressing but also fascinating. Eventually, my curiosity overpowered my snobbery and I was one of the first people to interview one of the dino-erotica girls. I interviewed Alara Brawnen and my literary worldview was forever changed. It was easy to laugh at her and think she was destroying literature, but in the interview and in our emails I witnessed a hardworking writer having some fun, while paying off her student loans.

Weeks later, I was freelance editing a truly awful book and thought: I’d rather write niche erotica than try to fix this unfixable mess. Dinosaurs were already taken, but a friend told me about a viral documentary about ‘masking’—men dressing up as living female dolls. A story idea came to me about rich Illuminati types in D.C. hiring the Maskers and having their way with them.

In a week I wrote and edited The Maskerade Ball in DC: Where Masker Men Become a Real Cinderella…to Men & Women of Power. I tried to think of a female Marquis De Sade for a pen name. An hour later, Mandy De Sandra was born, and I christened her with a Twitter handle. I was playing in a band at the time and my guitar player’s buddy whipped up this cover for free, and then I put it out on Kindle and Createspace. 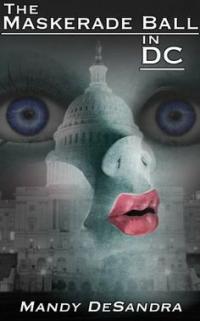 Eat your heart out Matthew Revert.

It sold pretty well and I enjoyed writing it. I thought I'd found a whole new revenue stream, but my erotica career never got off the ground. No sexy or juicy reasons, just depression. Not even manic-depression—uni-polar sad-as-fuck depression that lasted way too fucking long. I don’t believe in writer’s block, but depression and anxiety can cause it. I don’t want to turn this post into a mental health PSA, but do seek help if you've been having symptoms that keep lingering like an awful cold. I still wrote through all this but I hated writing and hated everything else. You can’t write your way out of depression.

After getting help and getting on meds, the desire to write professionally returned to me. I still needed to find some inspiration and something to write about, and that inspiration came from the place most writers go to procrastinate—Facebook.

My friend and, at the time, mega-Bizarro Fan, Raye Roeske, shared a picture of Kirk Cameron holding up a picture of a crocoduck. Boom! That picture was a call from God itself to write a weird and transgressive erotica about Kirk Cameron and the creature having hardcore sex. It just needed to exist. The ridiculous story idea filled me with that addictive desire to write again.

When I outlined the story and it turned out Kirk Cameron would also have stigmata hand sex with a cheese Jesus and the ghost of Boner Stabone, I thought it would be wise to not to put my name on the book.

I signed into Mandy’s dormant Twitter account and Tweeted about writing a story that would make Mr. De Sade smile. Through this stupid story, I found the joy in writing again. I laughed out loud and kept on laughing for all three drafts. Two weeks later, I reached out to on artist on Deviant Art who gave me permission to use his bowtie crocoduck on the cover. I did a copy edit, and then uploaded Kirk Cameron and the Crocoduck of Chaos Magick onto Kindle. I then had Mandy share it on Twitter. 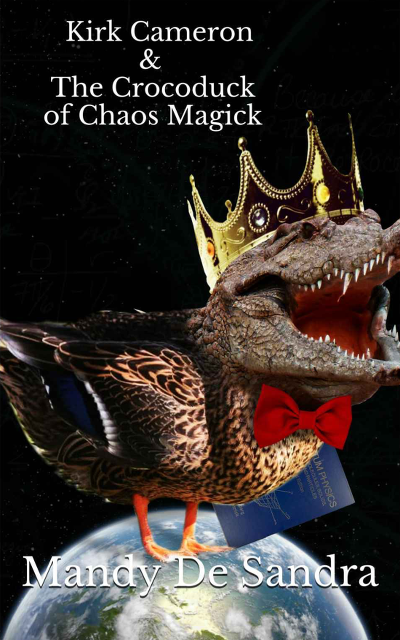 Life went on and I started revising a YA novel and plotting a Bizarro novella. I remember I had taken my cat to the vet, and in the waiting room seeing a prominent blog I follow called ‘The Friendly Atheist’ sharing Crocoduck. Then Wonkette shared it. Then it went viral. The media spread the news of Kirk Cameron, Cheese Jesus, and Crocoduck like a virus. Huffington, Jezebel, Gawker, AV Club, and last but not least VICE. If that show Best Week Ever was still on, Mandy’s book would have been on it.

It was like having a NYC publicist. With Crocoduck, I got probably $15,000 of advertising for free. Holy shit! I remember thinking. I felt like I had won the lottery. I’d like to say I knew this book would go viral, but the truth is I just got extremely lucky. After the rush and the high wore off, a good writer friend and editor, Garrett Cook, gave me some excellent advice—just ride this as long as you can.

After the viral phenomenon cooled down, Mandy was still in demand, so I wrote a ton of political Bizarro Erotica. To actually make money writing crazy self-indulgent weird shit was mind-blowing. It felt like getting a job I was completely unqualified for and having the boss decide to give me a raise. So I worked my ass off and wrote a ton, but I noticed that certain Mandy stories fizzled out because I wasn’t that into the story idea. I enjoyed writing for money, but I had to enjoy the core of the story more than the idea of getting paid. I had to reach into that part of me that wrote Crocoduck for the joy of it. 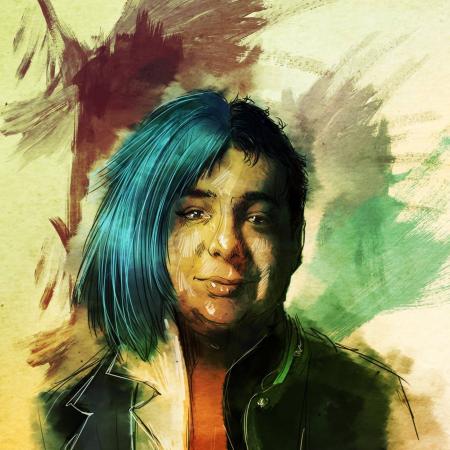 Don’t get me wrong, I loved getting paid for the labor of writing these political and satirical sex parables. I realized it was the little kid in me or inner child in psychology terms. He loved writing these transgressive erotic kindle stories and pretending to be Mandy De Sandra and saying crazy offensive things on Social Media. I have always been a little shit. I can still remember being a five year old at camp and having a camp counselor with a thick Irish accent yell at me, “Behave, you mischievous little bastard.” Mandy De Sandra is that little kid without Ritalin or therapy. When that kid is happy and the adult me can get paid or grow as an author, then I am in a very Zen place.

But writing professionally isn’t just about connecting with your inner child and being Zen. It is still a business that will kick your ego’s ass and is all about sales and press. The bullshit of the business still affects how you are perceived as an "artist." With the success of Crocoduck and Mandy, I learned the hard lesson most musicians learn—nobody gives a shit about you until you’ve had some type of hit. I wasn’t on anyone’s radar before Mandy, and then a few weeks after Crocoduck I had small press editors reaching out to me and I even hit it off with an agent. Family started to take me seriously because I was in the news and actually got paid for my writing. It was a little disenchanting, but I accepted it. Writing is definitely about skill, but luck really fucking helps. And when you get lucky, you need to make the most of it. It motivated me to write as much as possible and continue to play the odds.

Mandy didn’t just help me understand craft, she helped me in the mental aspects of writing professionally. Mandy gave me needed confidence as a writer. Not ego or delusions of how great a writer I am, but belief that I can write something readers will enjoy, and that I can always learn how to do it better. This earned belief has helped me through the hard times that still come.

This year I have focused more on being Christoph Paul than Mandy, but we did our first unofficial collaboration as I incorporated one of her ideas into a comedy horror novel I recently finished for a small press. I am debating asking the publisher if he should credit both of us on the book. I definitely owe Mandy. She helped me do what only a few years ago seemed impossible, but now I trust the process and believe in the chaos magick of writing and publishing.

Bookshots: 'Cartoons in the Suicide Forest' by Leza Cantoral

Scandalous! Is 50 Shades of Grey Better Than You Think It Is?

Fifty Shades of Inattention: An Open Letter To The Husbands and Boyfriends of America