Stoicism has helped me through a great deal of trouble in my life, and I encourage anyone experiencing pain to consider learning more about the Stoics. An excellent and accessible starting point is Ryan Holiday. He has a wide array of books, podcasts, and YouTube videos that will serve you well. In my research I have found there are a number of lessons from the Stoics we can apply to our writing.

“The chief task in life is simply this: to identify and separate matters so that I can say clearly to myself which are externals not under my control, and which have to do with the choices I actually control.”—Epictetus

We cannot control external things that happen to us, but we can control our reactions to them. And so it goes with writing, too. It is a waste of your energy to concentrate on things you cannot control. These include: your book’s critical reception, publishing trends and what’s in fashion when your book is published, the publishing house or film studio’s budget, the mood of your (potential) editor/publisher/literary agent when you submit your story, and world news. With regards to the latter, when the film adaptation of Adam Nevill’s The Ritual was initially scheduled for release, the original marketing revolved around the tagline “They should have gone to Vegas”. This was abruptly changed when a shooting occurred on 1 October 2017 in Las Vegas, killing 58 people and injuring in excess of 500.

Don’t be fragile. Expect criticism and hate to come your way.

We should focus on the things that we can control such as plot, character, dialogue, foreshadowing, and subtext. We can write the best damn story we’re capable of and even employ others to help us with it, such as taking on editors, proofreaders, and enrolling in a writing course or two.

We self-sabotage when we get upset because a book or film has been released with a somewhat similar plot to our own. Only today did I see someone reminiscing about how ‘devastated’ they were when A Quiet Place came out because they had come up with a similar premise. And they said this with complete earnestness, as if the likes of The Silence by Tim Lebbon and Bird Box by Josh Malerman hadn’t been written before A Quiet Place. Originality is not in the idea itself, originality is in the execution.

Your story is unique because it’s your voice.

Your story is unique because you’re the one telling it and only you could tell it in that exact way.

So the next time a story or film comes out that bears similarities to one of your own or even a work-in-progress, care less. Better yet, don’t care at all, because unless the writer has hacked into your hard drive and stolen your story, it isn’t your story. It was never your story, and the concept itself was never what made your story original.

“In your actions, don’t procrastinate.”—Marcus Aurelius

This one is pretty personal for us writers. It’s joked about that whenever writing must be done or a deadline is impending, suddenly the house becomes incredibly tidy as the writer scrambles to do anything but write. We are known for procrastinating because the blank page is scary, but what’s even scarier is realising you wasted your life doing the things that didn’t matter, and now it’s too late to do the things that do.

Aurelius’s quote brings to mind the conversation I had with Craig Clevenger on the This Is Horror Podcast, in which he said he always puts everything into his current work-in-progress. Plainly speaking, you must write each story as if it’s your last, because one day it will be. Don’t save that great scene, incredible line of dialogue, or the important subject matter you truly want to write about for the next story, put it into the current story.

Do not wait until you’re ‘better’, deliver your best now.

Apply this to life as well as writing.

Stop dilly-dallying and putting things off. Write the stories you want to write and live the life you want to live, because one day it will all be over, and you need to ensure you thrived rather than simply existed.

Be grateful for what you have rather than lament that which you do not.

“He is a wise man who does not grieve for the things which he has not, but rejoices for those which he has.”—Epictetus

This brings to mind Jonathan Janz’s philosophy: It’s good because …

The idea here is rather than dwelling on a misfortune or negative circumstance, we look at how this might result in something positive. This isn’t always to say the positive outweighs the negative, but it does enable us to focus on the good. Let’s say you’ve broken your leg. Rather than concentrating on the significant impediment this has brought about, you can say, ‘It’s good because I now have more time to write’ or ‘It’s good because I can now spend more time with my family.’ You’ve lost your work-in-progress and all backups, but it’s good because you now have to rewrite it from scratch with a clearer vision. Those moments of brilliance will come back to you, and anything you cannot remember was likely not worth remembering. Good! The world has been saved from meandering and inconsequential fiction. Why not never backup your work and make a habit of periodically losing it?

For more on how you can make the best of terrible situations, consider reading Catherine Baab-Muguira’s Poe for Your Problems: Uncommon Advice from History’s Least Likely Self-Help Guru. 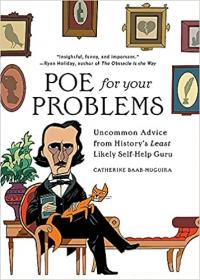 Don’t respond to hate with hate.

“What if someone despises me? Let them see to it. But I will see to it that I won’t be found doing or saying anything contemptible.”—Marcus Aurelius

This one should be self-explanatory. If you receive hate do not respond in kind. Too often people become embroiled in on or offline disputes. Hate met with hate simply compounds hate. Rarely does such malice result in anything positive for either party. Remember, too, that you are not obligated to respond or reply to anything.

This is tangentially related to, ‘do not reply to negative reviews’ (which is not something Marcus Aurelius said, but then maybe if he’d had a Goodreads he would have). Everyone is entitled to their opinion, and if someone didn’t enjoy your book it is not for you to change their mind or tell them why they’re wrong. They aren’t wrong. Taste is subjective. Similarly, don’t confuse a negative review with hate. If someone doesn’t like my work or I don’t like someone else’s work, it has nothing to do with one’s opinion of the artist, only the art.

Don’t be fragile. Expect criticism and hate to come your way. Do not give in to hate and respond in turn. If you must respond, do so with kindness and positivity.

Stop worrying about the future and concentrate on the present.

“It’s ruinous for the soul to be anxious about the future and miserable in advance of misery, engulfed by anxiety that the things it desires might remain its own until the very end. For such a soul will never be at rest—by longing for things to come it will lose the ability to enjoy present things.”—Seneca

It is easy to invent future problems, though the irony is that in doing so there is a tendency to create a self-fulfilling prophecy. The person who dwells on misery is likely so self-absorbed in woe they are unable to see the opportunities in front of them. If the perpetual worrier gets some good news, they are likely to worry about the next imagined problem. Someone options your book for film? Rather than celebrating this win, the worrier focuses on the statistical probability it won’t ultimately be made into a film. You get a big advance for a book deal? The worrier thinks it will never make back its advance and they are doomed to ever get a good deal again. Your book becomes a New York Times bestseller? The worrier believes they have peaked and will never hit such heights again.

Don’t be the worrier, celebrate your wins, and refer to Janz’s It’s good because... response for all life events.

Who are your favourite Stoics? What quotes do you come back to and how have they made a difference in your life? Sound off in the comments.

The Blagger's Guide to Philosophy and Literature

The Linguistic Turn: Explorations at the Edge of Language

The teaching of Stoics is split into three parts: physics, logic, and ethics. From the purpose of view of recent science, their physics - which explained not only phenomena that modern physics deals with, but also biological and psychological phenomena - was naive and infrequently wrong. for instance, ancient Stoics believed that a soul may be a gas-like matter that's manufactured from air and fire, that's situated in our chest and reacts to external stimuli. It seems that they were wrong about both gas and chest, but the very concept an organ that's to blame for cognition and our mental condition could be an object - is pretty modern, because that's what our brain is. If you write my essay about Stoic texts and ignore clearly wrong stuff, you'll be able to see that their understanding of nature was very modern.