So you’ve just seen the new trailer for Moon Knight and you have two questions. I’ll give you the shorter answer first. Arthur Harrow, played by Ethan Hawke, is a villain that appeared in one issue of the comic back in the 80s, who used Nazi science and human test subjects to further his research in pain management. He left no lasting impact on Moon Knight and was never seen or mentioned again, so I really have no idea what his presence on the show might portend, and that excites me. Perhaps the TV show will be a platform for truly bizarre stories just like its inspiration.

Now to address your real question: “Who the hell is Moon Knight?”

Well, that answer is a lot more complicated. Once upon a time, there was a badass mercenary named Marc Spector, a highly trained killer and a “master of every weapon known to man.” He committed atrocities for cash in conflict zones all over Africa. During a heist pilfering historic treasures from an ancient Egyptian temple, Spector was betrayed, shot, and left to die by his partner, Raoul Bushman. The resident deity of the temple—Khonshu, god of the moon and vengeance—resurrected Spector to serve as his warrior priest. He returned to New York to fight crime and sometimes werewolves as a costumed vigilante, dressed in all white because “I want them to see me coming.” As Moon Knight, it is Spector’s duty to protect those that travel at night and to wreak bloody vengeance upon the wicked. To that end, he was given incredible strength that waxed and waned with the lunar phases. Under a full moon he could rip a solid steel door off of a bank vault, but after disappointing Khonshu one too many times, the god revoked this blessing. Occasionally Spector will also receive prophetic visions from his god that will lead him to his target once he’s able to interpret them. It is also speculated that he cannot die, as Khonshu has brought him back to life at least four times. In terms of brutality, Moon Knight falls somewhere between Daredevil and the Punisher. He tries not to kill, but it’s a line he’s willing to cross under the right circumstances, and he has no problem horribly maiming or even mutilating his enemies. After one of their many confrontations, Moon Knight cut off Bushman’s face and kept it as a trophy until his girlfriend caught him wearing it and pointed out how ridiculously fucked up that was.

After one of their many confrontations, Moon Knight cut off Bushman’s face and kept it as a trophy until his girlfriend caught him wearing it and pointed out how ridiculously fucked up that was.

But Marc Spector is not just Moon Knight. He is also Stephen Grant, the charming billionaire businessman that funds his superheroics, and Jake Lockley, a New York cab driver that hears all of the city’s dirty secrets. In more recent comics he will sometimes dress up in a fancy white suit and call himself Mr. Knight to facilitate civil communication with the authorities. While these identities began merely as roles Spector would play to deal with different situations, later writers would depict this as a multiple personality disorder. Stephen, Jake, Moon Knight, and even Khonshu himself, are voices that Marc constantly hears in his head. He doesn’t always get to decide which personality is in the driver’s seat, and it’s possible for one of his personas to hide things from the others. For example, Marc Spector was unaware that Jake Lockley had fathered a child for years, even though they’re both the same person. Spector also frequently argues with Khonshu about how much violence is necessary, trying to keep his bloodlust in check while his god demands ever more mayhem. Spending so much time as other people, Marc is often confused about who his real self is, and what he truly wants. Sometimes he even becomes trapped inside his own mind, having to confront some very unpleasant truths before returning to reality. Moon Knight’s retconned struggle with mental illness completely redefined a character that had been otherwise unremarkable until then.

Even if you’re an avid Marvel reader, it’s perfectly understandable if Moon Knight has escaped your notice until now. I have plenty of friends and colleagues who were only aware of his existence because he popped up in an issue of Spider-Man or Avengers, and because Marvel heroes frequently invoke him as a yardstick for insanity. Despite staying consistently active since 1980, Moon Knight didn't become a household name until his show was announced. That’s because for most of his early career, he was a pretty lame Batman knock-off. Both are dark urban avengers who dress in monochromatic costumes to scare the bad guys before they punch them. Batman is the world’s greatest detective, while Moon Knight is the “Inspector Holmes of kung fu madmen.” They masquerade as billionaire playboys, so they can afford to fight crime with an arsenal of themed weapons and vehicles, like batarangs or a Moon Copter. And both are tremendous assholes to all of their friends. The biggest differences between them is that Moon Knight didn't have a gallery of memorable rogues to battle, and often had to wade through uninspired storytelling that was elevated only by its amazing artwork. His banter was especially terrible—he quipped just as much as Spider-Man, but wasn’t half as funny, throwing out tons of dad-grade moon puns. It wasn’t until he lost his mind that Moon Knight finally became an interesting character.

With a mentally unbalanced protagonist prone to hallucination, Moon Knight opened up a deep well of narrative potential. Literally anything is possible, and no one, not even Marc Spector himself, can predict how he will react. Moon Knight might disfigure street thugs, fight werewolves, investigate a house haunted by ghost fungus, or travel the multiverse to stop an even crazier version of himself from killing every other iteration of Moon Knight in existence. One time he defeated the Avengers single-handedly and stole their powers to help Khonshu conquer the Earth. He eventually came to his senses and helped the Avengers put his god in an Asgardian prison for unruly deities, but it was pretty awkward in the office after that. Thanks to Marc’s unreliable perception, the story doesn’t even have to make sense in order to be believable. Since his adventures take place in the Marvel universe, not even the reader can always be certain what is “real” or “imaginary.” Puzzling that out is half the fun. Is he really fighting an army of angry amputees, or is that just Marc visualizing the guilt he feels about brutalizing so many people?

From the teaser, it is already apparent that the show will be making some changes. For one, Oscar Isaac’s Stephen Grant does not appear to be a smooth-talking billionaire playboy, and it seems that—at least at the beginning of the show—he is not aware of Marc or his other personalities. My guess is that rather than confronting his fractured identity, the show will be about Stephen discovering his other selves and trying to figure out what they get up to during his worrisome blocks of lost time, as evidenced by the scene where he appears horrified to discover a gun in his hand. I think this is an effective way to simplify a very complex character for television while still remaining true to the spirit of Moon Knight’s best stories. 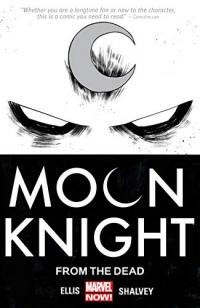 However, there is still one major pitfall the show must avoid. Even when he is completely divorced from reality, Moon Knight’s stories rarely include the infuriatingly common “just a dream” trope. His greatest struggles may be mental, but Marc’s conflicts are almost never completely contained within his mind—he is often depicted arguing amongst his selves while pummeling henchmen. But while Marc’s judgement and sense of identity are questionable, Moon Knight is not. However delusional Marc may be, we know that Moon Knight actually exists because he appears in other titles and interacts with characters we know to be “real” within the Marvel universe. Sometimes his louder escapades even get covered on the news. Back when Tony Stark was director of SHIELD, he built a special task force just to stop Moon Knight's spree of carving crescents onto the faces of criminals. It is easier for the audience to indulge and later interpret the more confusing flights of fancy if they have an anchor in the reality of the story, something concrete to care about. Marc, Stephen and Jake may be arguing inside his head, but Moon Knight is in the real world, where his actions have consequences and he is susceptible to injury and death. The biggest mistake the TV show could make is to blur that line for more than an episode. If Moon Knight is reduced to a figment of Stephen’s imagination, it will be an uphill battle to convince viewers to emotionally invest in the character and his actions. The real story is about Stephen figuring out why, not if, he is the Moon Knight.

Well, I suppose I should give you some recommended reading. Although I love what Moon Knight has become over time, not all of his stories are of equal quality. I honestly wouldn’t bother reading anything from before 2006—you won’t miss anything particularly noteworthy. My personal favorite is Warren Ellis’ run from 2014, which shakes up the status quo in fun ways and finally answers some long-standing questions about Marc’s relationship with Khonshu.

Moon Knight has turned into one of Marvel’s most fascinatingly bizarre heroes, excellent fodder for a psychological superhero character study. His comic evolution is not dissimilar from the trajectory of other recruits for the MCU—a crazy D-lister reinvented by writers that saw his untapped potential. A television series could be the perfect venue to plumb the murky depths of Moon Knight. It certainly can’t be as bad as Iron Fist, right?

Get Moon Knight Vol. 1: From the Dead at Amazon

When someone writes an paragraph he/she keeps the plan of a user in his/her brain that how a user can understand it. Thus that’s why this paragraph is perfect. Thanks!
온라인 카지노
카지노사이트
바카라사이트
토토사이트
호텔 카지노
https://www.j9korea.com/