I should point out that John Urbancik has some great novels too, along with stellar nonfiction work. Praising his short stories isn’t meant to imply that his other stuff isn’t great as well.

Declaring someone the G.O.A.T. of anything is perilous territory. In a sense, you have to lower other greats at least a notch to put your pick at the top of the list. With short story writing, you’re dealing with a pantheon of authors spanning centuries and genres. To declare the greatest of all time is still around and writing today is certainly presumptuous on my part.

I love short stories from a wide range of authors. I think short stories show the real potential of a writer’s talent. It puts their iron on display. It shows what they are capable of in a limited space. If I had to come up with a top ten list, I would struggle. J.D. Salinger might hold second place. Shirley Jackson would surely be in the top ten. I’d drive myself mad trying to get that list right.

So, why am I so sure of John Urbancik’s place at the top?

The proof is only in the reading, so that’s what you’ll have to do to determine whether you ultimately agree with me or not. My favorite John Urbancik story is always the next one I read. There is a unique style to each one. There is also a consistency of quality across the board. Each story stands apart from the stories of so many other authors I love.

You can find a treasure trove of stories on his Patreon page, or you can grab up any one of his Ink Stains short story collections, each one named after a month of the year. Pick at random. I’m that confident in his work.

The thrust of this article is going to be the why and the how of the greatness of John Urbancik’s short fiction, as I see it.

Thinking Deeply about the Creative Process 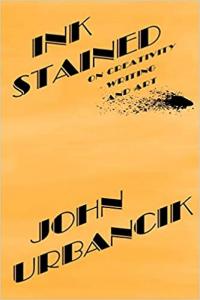 Urbancik released a creative writing book called Ink Stained: On Creative Writing and Art. Though it is one of my favorite resources on writing, it is more than that. It discusses and explores creativity and its impact on all areas of life.

Prior to publishing this book, Urbancik had an ongoing podcast where he shared his work and explored ideas of creativity. That podcast is no longer around, but many of the ideas in his book were explored during the recording of those episodes.

He draws from a lot of sources for his short stories and for inspiration in other areas of his life. In reading his work, I see the influence of fairy tales, multiple genres, other creators, and more. Underpinning all of that is his open hunger for the creative process, which he spends real time analyzing and considering on a philosophical level. Those of us who consider ourselves creators would do well to spend that kind of time really thinking about our own processes.

Expressing Creativity in More Than One Space

One of Urbancik’s strengths as a creator is that he creates in more than one medium. In addition to being a great writer, he is also an avid photographer. Just as his writing ranges, so do the subjects of his photography.

There is an undeniable benefit to engaging the creative process through more than one medium. There is a depth to his writing that I have to believe is fed and enhanced by his work in visual artistic media. The act of looking at things in more than one way adds dimension to what he creates.

As big a fan as I am of his short stories, I enjoy his photography as well. You can see that work on his Patreon.

I was reading Brian Keene’s nonfiction book, Sympathy for the Devil. In one piece, Keene recounts his version of events at the 2000 World Horror Convention. There were several names there I was surprised to see. I didn’t realize some of them had been in the industry that long. But I was not surprised to see John Urbancik’s name among the generation of writers making an impression some twenty years ago. Time represents a vital component of experience, but there is more to it than that.

Urbancik is well traveled. On top of that, he has lived many different places in the United States and around the world. The act of immersing himself in different cultures and ways of living broadened his experience and expanded his view of life. When he creates viewpoints for his characters or develops a setting for the action of his stories, he’s drawing from a deeper well. Even in the subtle story details, his range of experience adds something others struggle to capture.

The Ink Stains project may have built up his short story writing more than anything else he has done. Urbancik literally wrote a new story every day for a year. That would be daunting for most authors. A story a week would be challenging. The act of creating new stories over and over honed certain narrative skills. The struggle of trying to figure out what to do next burns away in the perpetual practice of finishing pieces one after the other. I’m not sure there is anything else that could match the intense level and volume of practice that turned John Urbancik into the storyteller he is now.

My favorite John Urbancik story is always the next one I read. I can’t say that for even my favorite authors in any given genre. My favorite storytellers have hits and misses. While I’m sure Urbancik himself would say not all his stories are great, and objectively that has to be the truth, that has not been my experience. If I search hard enough, maybe I’ll find one I don’t like. I’ll certainly let you know if I ever do. But this is why John Urbancik, at this point, appears to be the greatest short story writer of all time.

Get Ink Stained at Bookshop or Amazon

The Impact of Scares That Care

When Writer's Block is Connected to Depression

March is the Perfect Month to Give up on Your Goals for the Year—But Hold on!