The first time Luke Cage came to my notice was in the pages of 2004’s Secret War. Cage was among the heroes recruited by Nick Fury for an unsanctioned covert regime-change operation in Latveria, and was also the first to suffer retaliation for it in the form of an explosion that leaves him comatose. In the hospital we learn that his unbreakable skin does not negate internal damage, but it does keep doctors from operating on him. At the time, I remember thinking that his powers, although simple, were a perfect metaphor for the perils of toxic masculinity—that a hard exterior may protect from harm, but can also prevent others from helping. When I started to read up on the character, I encountered a post that said it was “messed up” that the best power they could come up with for a black superhero was to make him immune to bullets. That it was a twisted way of handicapping the character—Cage was strong, but not powerful enough to play in the big leagues, so he would always be stuck fighting street crime in Harlem rather than saving the world with Earth’s Mightiest Heroes.

The very things that once made Luke Cage seem so cliche now make him a more relevant hero than ever before.

Ironically, this came right before Cage was recruited into the New Avengers and played a pivotal role in opposing the Superhero Registration Act. He married fellow hero Jessica Jones and became a father, but still somehow found the time to lead three different super-teams and save the world on a stressfully regular basis. His steady rise in popularity eventually led to the Netflix series, which is currently enjoying a rather warm critical reception. Showrunner Cheo Hodari Coker declared that the world was ready for a bulletproof black man, and it's hard to argue with him. With far too many black lives being lost to police brutality and gun violence in the real world, the very things that once made Luke Cage seem so cliche now make him a more relevant hero than ever before.

Luke Cage is not just a strong black man, but one uniquely suited to stomp on the symbols of systemic oppression plaguing his people. We watch him wade through a barrage of bullets like they were lukewarm bathwater, and see him break chains, punch through brick walls and kick down doors of steel bars. Guns cannot hurt him and jail cannot hold him. He wears a hoodie full of bullet holes, a potent reminder of a terrible tragedy that is transformed into a symbol of power and solidarity on his back. He stands up and does the right thing without fear of the consequences, and neither the criminals nor cops of Harlem can bully him. As Method Man says during his cameo, there’s something powerful about seeing a black man that’s bulletproof and unafraid. Luke Cage is a black voice that cannot be silenced, an idea that brings hope to many and terrifies both sides of the establishment.

In addition to being strong, Cage is also relatable. He’s not the king of a fictional African nation or a billionaire genius with a high-tech suit of armor. He is an everyman living in the same kind of rough neighborhood many of his fans inhabit, facing the same daily challenges they do. His journey from survivor to hero mimics the struggle of the gifted and talented who grow up in such places, constantly forced to choose between helping themselves or their community. At the start of the series, he avoids using his powers, preferring to keep to himself and not draw attention, a survival mechanism known all too well by far too many. When he finally decides to take action, he faces resistance not just from the villains but also the community itself, which has an instinctive mistrust for outsiders. Unlike most superhero stories, it is not enough for Luke Cage to simply beat up the bad guy—he has to convince the community that the bad guy is worth defeating, that there is a better future for them than what the gangsters and politicians have to offer. In his contribution to the soundtrack, Method Man asks “Who do you call when no one obeys the law and there ain’t no Iron Man to come down and save us all?” Luke Cage has always been about saving people, not the world. He fights against “real” problems, because it’s hard to worry about an alien invasion when crime controls your neighborhood and the cops are just as likely to kill you as the bad guys. Luke Cage would go on to fight aliens and monsters with the rest of the Avengers in the comics, but he still always found time to walk the streets of his old neighborhood, sending thugs scattering in a way that would make Omar Little jealous. 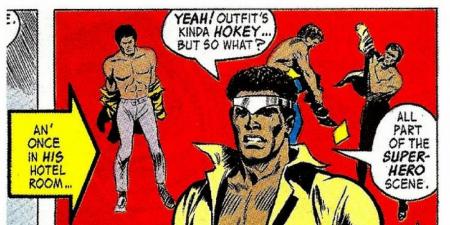 Although fundamentally conservative (like most superheroes), what sets Luke Cage apart and makes him a definitively African-American hero is that he not only doesn’t trust the system, but will also openly oppose it. Characters like Batman and Daredevil, despite working as vigilantes, still put a lot of faith in the system to dispense justice when they finally catch the bad guys. It’s flawed, but it still works with a little help. But to Luke Cage, the police can’t even be trusted to do that much. Our hero is constantly told to stand down and let the system do its work, even as it repeatedly fails to protect and serve. Numerous bodies drop in the first half of the series and the police response is minimal at best, but as soon as a white cop is killed they storm Harlem like an occupying army, trampling the civil rights (and faces) of innocent citizens in their righteous fury. Cage is relentlessly hounded for crimes he did not commit while the real perpetrators are ignored. Even when he gift-wraps a suspect with damning evidence, the villains still go free because the system would rather protect itself than serve the people. In the unfortunate tradition of the historical figures that inspired him, Luke Cage achieves victory only to be sent back to prison. No matter how many times he wins, his fight is never over.

The title sequence of Luke Cage shows images of Harlem projected onto a black body. The image of one man carrying an entire city on his back perfectly summarizes the monumental pressure that faces any black hero brave enough to stand tall. Anyone would stumble under that weight. The show itself stumbles in a few places, most regrettably late in the third act, but that doesn’t diminish its accomplishments. It’s an unapologetically black superhero show that dares to tackle the toughest issues of the day rather than another martial arts master or CG monster, and it does it with so much style. Like Daredevil before it, Luke Cage continues to drag superhero television ever closer to the literary depth of its source material. It’s not often you get to watch a superhero show where the themes are more important than the fisticuffs, and for that Cage is to be commended.

How Daredevil Does Dark and Gritty Right