Let’s look at some reviews of Wandavision:

She's not the first superhero to be affected acutely by emotional pain; everyone knows that quote about great power and great responsibility. Yet for an MCU project, the choice to focus on Wanda's inner life is revolutionary.

WandaVision launches a potential new "forever" paradigm in entertainment. Disney and Feige are creating something that is brand new, even if they are using nostalgia.

WandaVision is hopefully a chance to allow more unique ways to tell these stories that dominate our media culture.

Okay, I’m happy you’re all enjoying WandaVision, and as much as I feel like a broken record, I’m going to say it again: You all need to read some comics.

While WandaVision is new to the cinematic side of things, it’s nothing new to the source material: comics.

Just to make sure we don’t get it confused, WandaVision is a new idea for superheroes on film, but it’s nothing new for superheroes, or for comics. I want to head this off before we all remember this big step happening on the screen instead of in the stapled pages of a comic book. 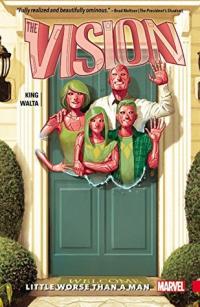 Tom King wrote Vision, a miniseries from 2015, and it’s great. It’s not, as The Verge puts it, “The perfect follow-up to WandaVision.” It was first. By a long stretch.

Tom King also wrote Mister Miracle, which has a similar feel. It combines a war between worlds with the grind of being a new parent. It’s excellent.

WandaVision is unique, revolutionary, and fresh in the world of superhero TV. But for comics, it’s yesterday’s news.

From the perspective of a comics fan, hearing how fresh this concept is...it’s a little like you saying you’ve tasted a brand new food, it’s amazing, it’s called A BURRITO. This is not a new food, y’all, just because it’s only now available in your neck of the woods.

In more and more comic books, the stories are about superpowered people doing superpowered things, but the superpowers are not the focus of the story. Super stuff is the storytelling vehicle, the vessel, not the core.

In WandaVison, superpowers that let you mold reality to be what you want (or what you think you want) are the lie that tell the truth truer. The nature of the truth being told is up to you, the viewer, to decide.

This is not a new storytelling method for comics and superheroes. This is the root of the creation of Marvel Comics’ offerings starting in the 1960’s.

I’m happy that WandaVision is using superpowers to tell a story that’s not necessarily about superpowers. But credit goes to comics for doing it first, and if I’m being honest, doing it better.

Comics, and especially superhero comics, have a reputation for being stupid, and that reputation has been solidified by the choices of filmmakers to focus on stupid stories.

However, because most people come to comics through movies and TV, I can understand why they would expect comics to be, well, stupid. Fun, but stupid. Most of the material they’ve seen adapted is more stupid-fun than it is emotional or smart. Infinity War quite literally tells the audience not to think about how time travel works in the story.

The only reason most people think comics are stupid is because you’ve been presented with a lot of stupid comics-based stories in movies and TV. WandaVision is a departure, so it’s getting a lot of praise. It’s not unwarranted, but I encourage you to refresh your understanding of comics. Read something new. Something without a hero you know. See what it’s really about.

Whether it's about real emotion: 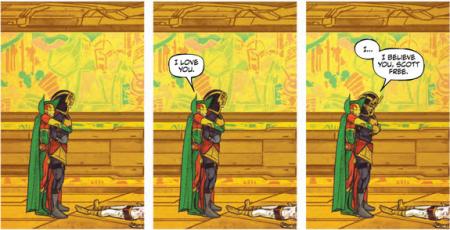 Or people building relationships with other unusual people:

Comics have a bigger range than you think.

It’s not that WandaVision is a phoenix rising from the garbage heap of comics. It’s not that comics are stupid and this is a rare, smart departure. It’s that movies are stupid, so stupid comics make good movies.

Look, we’re not going to pretend like this is the most important crisis in film. Or in comics. Or in any genre, really. It doesn’t even scratch the top 100.

What’s a little off-putting about the reception of WandaVision isn’t the positives about the show, it’s the fact that Iron Man came out in 2008.

And based on what I’m seeing, most of you didn’t take that opportunity. Based on the critical reception of WandaVision, this type of storytelling, and the general idea of superheroes not just punching all day, is a brand new idea to a lot of you.

Comics are the medium being strip-mined to feed the movie industry, and that can be a great thing, but maybe fans could take a little initiative and read a goddamn comic here and there. I'll list a handful below.

And maybe, if you like WandaVision, if you were pleasantly surprised, it’s time to watch fewer movies and read more comics.

Get Vision by Tom King at Amazon or Bookshop

Get Mister Miracle by Tom King at Amazon or Bookshop

Get The Immortal Hulk by Al Ewing at Amazon or Bookshop

Get Silver Surfer by Slott and Allred Omnibus at Amazon

Get Spider-Man: Life Story by Chip Zdarsky at Amazon or Bookshop

Get Wonder Woman: Dead Earth by Daniel Warren Johnson at Amazon or Bookshop

Storyville: Contemporary Superheroes Through the Eyes of a Pre-Teen