You've got a few months to catch up on Preacher's run of comics from the mid-90's before the series premiere on AMC. Or you could just read this column.

Let's take a look. And I promise, no spoilers that wouldn't be found in the show's trailer, that trailer's description, or in the description for the first volume of comics. This is a really great series, and part of what makes it great is the surprise. I swear, I'll do my best to preserve the element of surprise here. 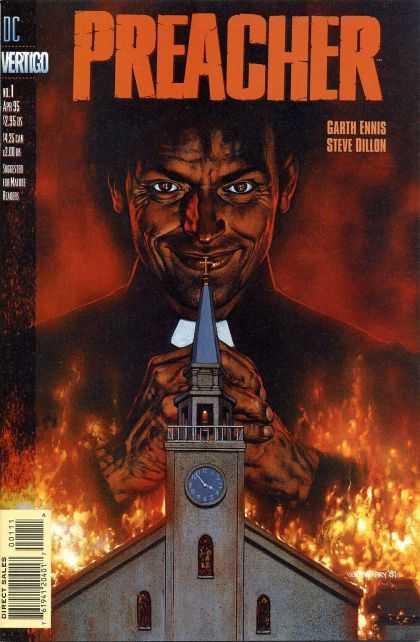 Jesse Custer, a drunken preacher, becomes possessed of a divine power: The Word.

Whatever Custer says, others are compelled to do. Whether it be asking someone to hand over his wallet or telling someone to go f*#! himself, humans can't resist The Word.

Throw in an ex with serious pistol talents and an Irish vampire buddy, and trust me when I say the comic's last story arc's title is spot-on: All Hell's A-Comin'.

Why You Give A Damn

Preacher is far from the first comic property to head to the screen. But it's not exactly the easy sell of The Walking Dead (Zombies. And they murder a horse) or The Flash (he's the most-fastest non-hedgehog being). Preacher doesn't have the superhero thing going for it the way Netflix's Daredevil does, and it's a far cry from The Avengers.

And it's these differences that make it compelling as hell.

For starters, this comic talks about religion, God, and whether or not God is a huge bastard in a way that superheroes just don't. And TV just doesn't.

Maybe it was a 90's thing to have your comics give God the business. Like in Savage Dragon from 1997 when Satan kicked God right in his be-robed ballbag. But nowadays, it's not as easy to find the kind of reverend-based irreverence that you can expect from Preacher. 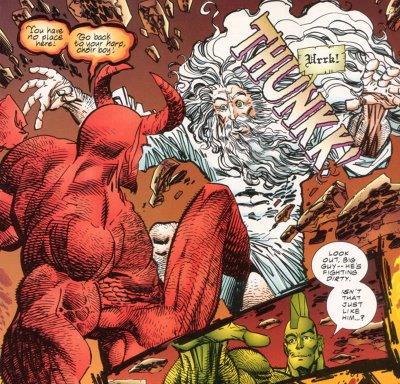 Here's the other thing I love about Preacher:

Jesse Custer, Preacher's main character, has a past. And that's not something a lot of comic characters have. Not in a useful, story way.

What was Iron Man's childhood like? And more to the point, it's not like we see the monsters from under Tony Stark's bed come back to haunt him as an adult. Superman's past comes back, I guess, but not in the real, visceral way we see in Preacher. Trust me, there's no way Superman would be as popular as he is today if he and Jesse Custer shared even a smidgen of origin in common.

Preacher gives every character a very real, very alive past, and when superpowers come along, it's not just about how we're going to move forward. It's about how people can reconcile the past with who they want to be in the future.

If that doesn't do anything for you, the book's also jam-packed with nudity and swear words like you wouldn't believe.

Quick and dirty, DC comics started an alternative line for comics called Vertigo. This was the era in which all music was labeled "alternative", most ways people dressed were "alternative", and the word "alternative" lost all meaning because everything was alternative. The important thing was, Vertigo was a way for DC to have a character whose head looked like a penis.

And Vertigo allowed comics and creators to do darker, more grown-up stuff. It was one of the best moves DC ever made, if sales and history mean anything to you.

Just as a quick round-up, here are some of the titles published under the Vertigo banner: Hellblazer, Transmetropolitan, Sandman, 100 Bullets, Astro City, Doom Patrol, Daytripper, Fables, iZombie, Swamp Thing, Sweet Tooth, V for Vendetta, We3, Y: The Last Man. Oh, and Haunted Tank, the 2009 reboot of which saw the ghost of a southern Civil War general occupying an Abrams tank in Iraq, piloted by...an African-American? How will these two EVER get along? Cue Odd Couple music.

Okay, they're not all winners. But a hell of a lot of them are.

Preacher was one of the earlier Vertigo titles to make a splash, starting in 1995, and it made great use of DC's secret, dirty uncle of a publishing label.

Preacher, unlike most comics you see, had the same creative team from start to finish. It was written by Garth Ennis, who isn't a household name, but probably should be. His particular brand of goofy ultra-violence gave us not only Preacher, but also Hitman (not the bald, barcode guy, a different one), a great run on Punisher, not to mention the one-shot Punisher Kills the Marvel Universe, which spawned a ton of copycats, but none as good, as bloody, or as thick with that feeling that you're reading something you really shouldn't.

Preacher's art was also quite a feast, with Steve Dillon doing the interior drawings, and Glenn Fabry providing covers that ranged from incredible: 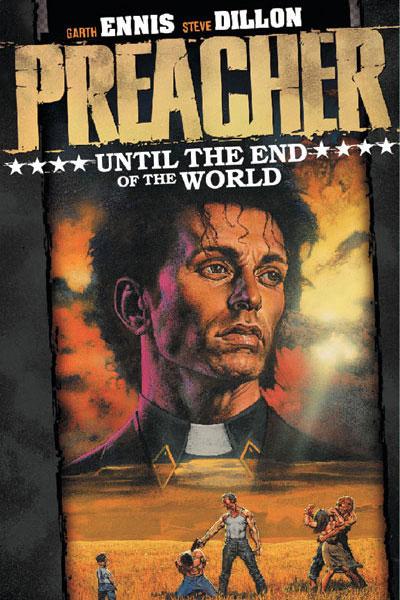 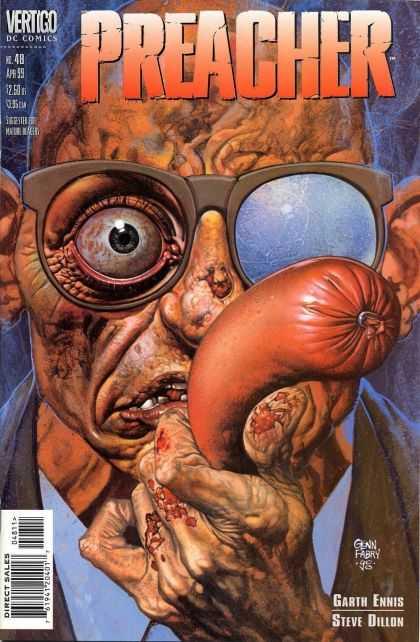 And, what the hell, while we're at it, he did this one too: 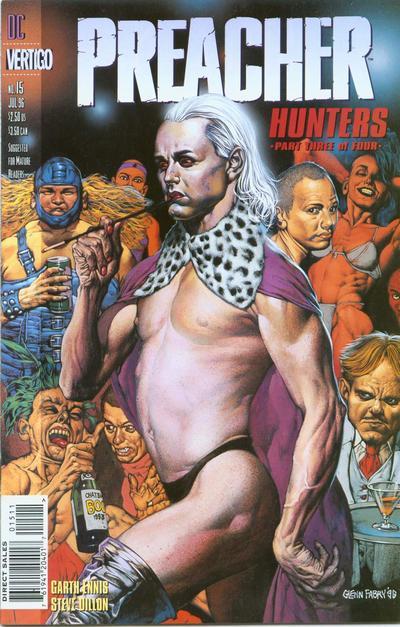 How Preacher Ended Up On The Screen

It hasn't been an easy road.

In 1998, Electric Entertainment was set to adapt the series. Garth Ennis wrote three drafts for the screen before Electric Entertainment stopped the project because of budget problems and the controversial source material. Perhaps they thought the story was a little more pro-god, anti-vampire, and fetish-party unaware.

HBO was ready to take a shot, and the ambitious plan there was to do a shot-for-shot version, each issue of the comic being 1-hour of the series. This series was also abandoned because new HBO execs found the material to be dark and religiously controversial. To be fair to HBO, almost everyone on Taxi Cab Confessions was in the cab at night. We don't know that these confessors didn't then got to church in the morning. Maybe ALL their shows were pious.

Columbia pictures owned the movie rights in 2008. There were some plans to breathe life back into a Kevin Smith take on the story from the early 2000's, but it never materialized. Am I saying for certain that Smith's Preacher script became Chasing Amy? Eh, why not?

Finally, the Preacher hot potato landed with Seth Rogen and Evan Goldberg. It had apparently been a project on the duo's wish list:

This is amazing! We've tried for seven years to work on Preacher and we're so psyched AMC is finally letting us. It is our favorite comic of all time, and we're going to do everything we can to do it right. Humperdoo!

I'm particularly impressed that Seth Rogen, Evan Goldberg and Sam Catlin understand Preacher fully — meaning they get it for what it is, not some vague approximation. All in all, it looks like Preacher can now be brought to TV in a way that I'd previously not have thought possible, and I very much appreciate that Steve and I have been included in the conversation in the way that we have.

There are a couple things in the series that might not work the same as they did in 1997.

On the one hand, Preacher's Cassidy is the most anti-Twilight vampire ever. What's the opposite of a twilight? Daybreak? Crap, that doesn't work. That kills vampires. But you get the idea.

The other thing, this book has a lot of man's man shit in it. When I read this as a very young man, it all worked. Now? We'll have to see. It's been almost 20 years, and I think we'll have to see whether the creators choose to hold up that part of the story. It's all interesting stuff, and it was fairly progressive to have a capable female character in your lineup in 1997. And in 2017 it probably still will be because that's how far we've come, but I digress. The relationship between Jesse Custer and his girlfriend, Tulip, will be the most interesting part to see interpreted and possibly updated or changed on-screen.

Alright. I've got 6 items to convince you. VERY minor spoilers ahead, so be done with this if you consider nouns out of context to spoil things in any way.

6 things from the comics to pique your interest:

Gerard Way, 'The Children's Crusade' and the Death Rattle of Vertigo Comics

Dwayne from Cincinnati, Ohio (suburbs) is reading books that rotate to often to keep this updated November 11, 2015 - 6:56am