Last year was my first World Fantasy Convention, in Columbus, OH. This year it was in San Antonio, and it was a very different con, so instead of posting a delayed live blog again, I’m going to go with a montage. In no particular order, then, here’s some of the stand-out moments, at least to me, of World Fantasy 2017.

Worst jet lag of my life. I fly out from Australia on Wednesday, carrying some personal baggage from a tough couple of months, and after the usual delays at LAX, my meridian clock’s in freefall. For the first three out of the five nights of the con, my schedule’s flipped and I don’t get to sleep until five or six in the A.M., waking up late morning and wondering where the hell I am. 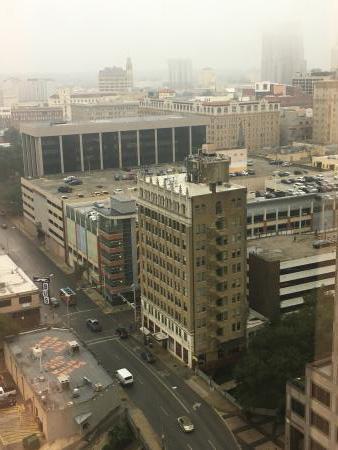 Getting my picture taken with Joe R. Lansdale.  This is a can't miss for me. After catching a few hours sleep, I manage to grab a coffee from the bar, get to his reading around half-way through and afterwards, ask him if I can take his picture for my LitReactor column. The next thing you know, there we are. I look like someone who’s just been caught shoplifting by a friendly but lethal store detective with a black belt in… Shen Chuan? I don’t know much about this martial arts system that Joe founded — all I know is that when I first decided to get serious about my writing, his weekly free stories were my dojo. 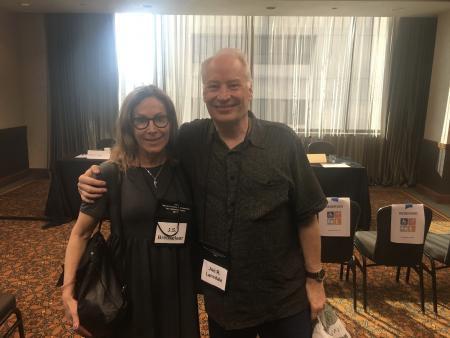 Watching fellow expat Jack Dann’s Dreaming in the Dark take the World Fantasy Award for Best Anthology. I get to know this gentle giant of Australian publishing and his wife, the author Janeen Webb, over the course of the con; from his Lawn Guyland twang to his raw enthusiasm for the talent in his adopted country, Jack’s ability to adapt to wherever he is and make it work for him strikes a deep personal chord for me.

Martha Wells’ toastmaster speech from the 2017 WFC awards. I weep and my jet-lagged eyes grow even puffier and I don’t care. I’m crying again now, reading it again for this article.

We [others] stumble on ourselves in old books and magazines and fanzines, fading print, grainy black and white photos, 16-millimeter film, archives of abandoned GeoCities web sites. We remember again that we were here, they were here, I saw them, I knew them.

Watching Jeffrey Alan Love make art at the bar —and snagging this signed illustration. Double happiness ensues when I watch him and Jeff Ford accept the World Fantasy Award for Best Artist and Best Collection respectively, for A Natural History of Hell— my favorite collection of last year. 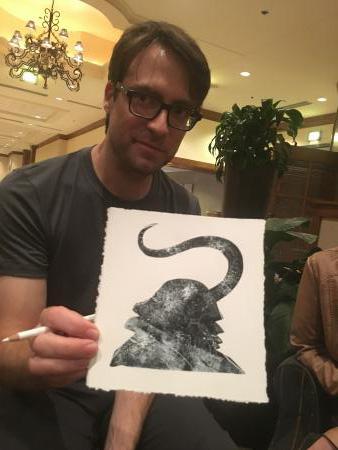 Reading a brand new story from my forthcoming collection, Collision, to ten more people than were at my last reading, and experiencing for the first time, being whisked, yes whisked away afterward for an interview with Gamut Magazine’s Mackenzie Kiera.

Being on a panel with, deep breaths, Suzy McKee Charnas, whose Vampire Tapestries was a gift from my sister way back when, and having to push through the preemptive panic attack. Also on the panel is editor Danel Olson, who is possibly the best-read person I’ve ever met, and Alan Beatts, owner of Borderlands Books, whose speech at the room party he throws later to celebrate the rise of this iconic bookstore from the ashes is so inspiring that I become a sponsor and you can too, here. 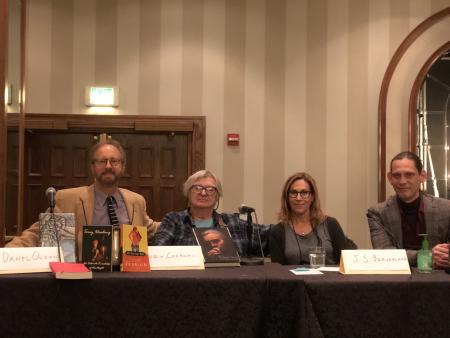 Listening to Kelly Link in conversation with GOH Karen Joy Fowler. I am completely beside myself. Later I get to tell Kelly Link in person the story of my finding a spiritual home in the Fantastic Women collection from Tin House, and reading “Light” there for the first of a hundred times, only to find myself sharing a TOC with it in reprint a few years later.  But for now I just listen to my idols spitball over first drafts, workshops and why writing to change the world is like having to drain (or fill?) a planet of swimming pools using only a syringe, and how, in the end, this “radical hope” is all we have.

Watching GOH Gordon Van Gelder gently roasted by a room full of people who wouldn’t be there if it weren’t for him.

Bar Con: morning noon and night this is where it’s at. This is where I’m too nervous about my panel to finish my quesadilla so Gordon Van Gelder has to, where business cards swirl like flakes in a snow globe, and where Greg Manchess signs my copy of Above the Timberline. It’s where I find in Saga Press’s Dominik Parisian, a fellow traveler on the streets of Leena Krohn’s Tainaron, where I lose my wallet and the barman finds it and lets me give him a hug, and where on the very last night, I discover that Ann VanderMeer’s tiny size belies a heart too huge to contain in one human body. 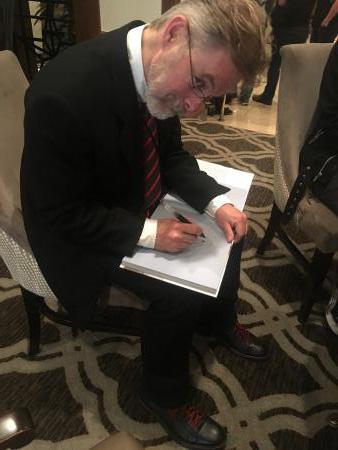 The River Walk, The Alamo and Texan food: I finally get to experience all three. Along the River walk I discover the Empire Bar (and two writers and I are traumatized along the way by a hobo having sex with the hotel fountain); I manage to run to the Alamo and back while waiting for my bus to Austin, and when the going gets tough, a $4 breakfast taco from The Original Blanco Cafe hits the spot. 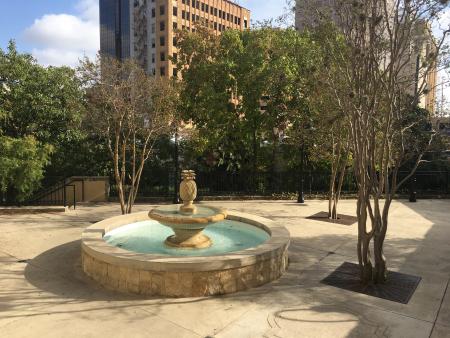 In spite, or even because of jetlag and awkward moments in the wake of auto-erotic nightwalkers, WFC hits the spot, too. It’s where once a year a horde of us word-people and art-people get to hang out and give each other enough radical hope until the next time.

J.S. Breukelaar is the Shirley Jackson Award nominated author of Collision: Stories, and a finalist for the Aurealis, Ladies of Horror Fiction (LOHF), and Australian Shadows Awards. Her previous novels are Aletheia (an Aurealis Award nominee), and American Monster (Wonderland Award Finalist). She has published stories, poems and essays in publications such as Black Static, Gamut, Unnerving, Lightspeed, Fantasy Magazine, Lamplight, Juked, and others including Women Writing the Weird, Tiny Nightmares and Years Best Horror and Fantasy, 2019. Her new novel, The Bridge, will be released in early 2021, as well as Turning of the Seasons, a collaborative flash fiction collection with Sebastien Doubinsky. A columnist and regular instructor of Weird Writing at LitReactor.com, she has a PhD in Creative Writing and Film studies and lives in Sydney, Australia where she teaches at the University of Western Sydney, and in the University of Sydney extension programs. You can also find her at www.thelivingsuitcase.com and twitter.com/jsbreukelaar.

Bookshots: 'Get In Trouble' by Kelly Link

Why The F*ck Aren't You Reading Kelly Link?