In May, I packed up all my things and hopped in my MINI Cooper, bound for Life 2.0 in Los Angeles. The five-day, 2,000-mile solo trek from Minneapolis was an irresistible opportunity to shake up my admittedly stale writing habits. I mean, Kerouac did it, and he was high; I'd have a novel ready by the time I got to California.

You Can't Depend on Scenery

Tepid Minnesota sun shining down, the first lines of Van Morrison’s Astral Weeks lilted through my speakers as the asphalt stretched ahead of me. Freedom! I planned to stop in Nebraska that night, brain full of words, inspiration and ideas that I’d dash down on my MacBook before drifting into the sleep of the Blissful Writer.

Okay, so the highways of the heartland aren't exactly inspiring. I saw a truck whose logo made for a good dirty joke. Minnesota had some nice trees, but they got old fast. It's flat, and the only excitement was the occasional roadside cow. Iowa looked suspiciously like Minnesota. Has anyone checked into this?

Absence of visual cues didn't hinder me; perhaps it even helped. I sang along with the radio and began cataloguing bits of dialogue and setting bric-a-brac in my head as I pushed confidently westward into the interminable cornfields of Nebraska.

By the time I hit Grand Island (neither an island, nor grand) my eyes were swimming, it was dark, and I had an electrical malfunction on the MINI to contend with. I showered the trail dust off, plopped into bed with my computer, and...fell asleep. I woke up hugging my computer, nary a letter written.

Mountains, Chickens and Men in Skirts 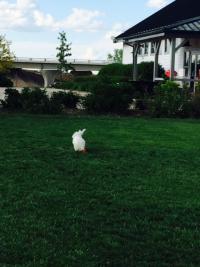 My car had a flat tire in the morning, but that's not the exciting part of this story. At the hotel-cum-fuel station-cum-Arby’s, a late-middle-aged, doughy man with Tony Danza hair was fuelling his Smart car. He wore what I'm calling a "mow-the-lawn" t-shirt, Nikes, and, as he stepped around the car and came into full view, an American Apparel gingham circle skirt.

Yeah, this guy’s making it into a story.

In Colorado, I stopped at a quaint little rest area with chickens grazing on the lawn. There was no visible chicken-keeper, though a group of leathered-up bikers were watching the chickens with a tender kind of fascination that gave the whole scene a dreamlike quality.

On to Denver, where I stayed with family and forfeited a night of writing in order to be sociable. Tomorrow. Tomorrow I’m gonna write.

After Denver is where the magic started. Scenery that refused to quit, that defied description and scoffed at my weak attempts to chronicle it. I stopped at every scenic overlook between Denver and Grand Junction (again, not "grand"), scribbling in my notebook odes to the Rockies that I would later discover, on reflection, to be gratingly grandiloquent and ultimately useless. I would not read these words that night, relaxing in my hotel in Grand Junction, though, as I was in for... 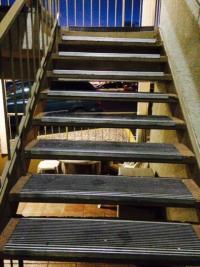 I’m pretty sure I checked into a murder hotel. Not a famous murder hotel, and not to be confused with the more exotic haunted hotel; this was the kind of place where hookers and petite midwestern girls “get disappeared”. There were dark external stairways, compelling stains, and flickering fluorescents. This was a hotel for mercenaries and child molesters on the lam. I was 75% certain I’d come out the next morning to find my car gone. I managed to freak myself out enough that I drove the 30 yards across the parking lot to eat at Denny’s. Because, you know, shivs.

I showered with my car keys in easy reach (stabby weapons of death), and slept in the next day’s clothes so I’d have a quick getaway. I fiddled with my computer, but wrote nothing except my last will and testament to a few friends, should I not last the night (the murder hotel had free wi-fi). I switched off the lights and watched eerie shadows enact macabre scenarios on the wall, violence punctuated by the spastic light two doors down that is typical of all murder hotels.

You’ll be happy to know that I survived. My car and all my worldly possessions were exactly where I left them. I did turn down the Free Hot Breakfast. Because, you know, razor blades and arsenic.

In Utah, No One Can Hear You Scream for Coffee

The following morning, I needed to write; I had a deadline. Hoping to get away from potential homicide as quickly as possible, I made for Utah, sans coffee. Mormons don’t believe in murder, right? This specific thought passed through my head: “I’ll stop in an hour, get a coffee, and write my column.” It was complete, I just had to punch out the words and send it off via coffee shop wi-fi. I actually went so far as to fantasize about stopping at every Starbucks on the way across Utah, writing like mad as I was swept up in a wave of inspiration. I’m in America, this is not an unreasonable request.

Utah is an uncanny kind of beautiful. I killed a lot of time between Grand Junction and Las Vegas stopping to take photos and hike because every time I rounded a bend, those red rocks against the blue sky knocked the wind out of me. I looked at the Native crafts displayed at some of the more scenic turnoffs. As someone who loves science fiction, I couldn’t help but be inspired by Utah's unique geology. The sense of absolute isolation in some places where I was the only car on the road, or the only one stopped at a rest area was, by turns, peaceful and disconcerting. It truly felt like an extraterrestrial landscape.

But there are no services in Utah along I-70. Every exit explicitly declares: NO SERVICES. It should be the state motto; it’s definitely more apt than “industry”. No fuel, no restaurants, and most importantly, no coffee. There are rocks, and there are tumbleweeds. Rest areas consisted of magnificent scenic overlooks and porta-potties; one luxurious location had a rickety, splintered bench and a vending machine.

And so I crossed Utah, exhausted from a night of vigilance, head full of words, belly rumbling, and craving coffee to the point of obsession. I had to start rationing my water once it became clear I may never see civilization again. I admit, I started to go a bit mad.

Relief finally came, like an oasis out of the red desert, in the form of a Starbucks near the Nevada border. I had coffee, and then another coffee. I filled up on mediocre pastries. I drifted into a state of caffeine-and-sugar-induced delirium that made it impossible to write anything coherent.

If you read Faded Pages, you know I did ultimately get my column done. In Las Vegas, poolside, which is really the only way to write in my opinion. I uploaded it just under the wire. Which was rather good timing, considering internet was disturbingly hard to come by during my first days in LA.

So I went unplugged. I fired up my MacBook and switched off the wi-fi. And I wrote like a sonofabitch. Writers who frequent Twitter love to bemoan the internet and social media as the ultimate time-suck; something I knew to be true but never fully appreciated until I had to go without.

No, I couldn’t research. No, I couldn’t listen to Spotify. So I opened a document of everything that needed research once I was back online. I listened to my sizeable iTunes library, having forgotten what amazing writing playlists I had there. I sat at my desk, in a vacuum in this brand new city, surrounded by boxes and bags, and allowed the words to pour from my head like water from the sky. Ideas layered one upon the next, taking shape in a great, beautiful mess.

When I needed them later, the LOLcats were still there. 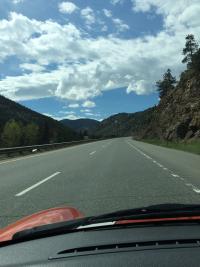 There are things I regret about the trip. I wish I’d stretched it out a few days longer, allowed myself more time to savor the experience. Doing it again, I would stop for a while at that chicken rest area, sit in the grass and write in my notebook. I'd certainly eat better than Denny's, Arby's, pastries, and, well, too much of nothing. I’d keep refreshed enough to write every day, in the moment, and do a better job of holding myself to my writing goals. I’d take the time to suss out those elusive, defiant adjectives I yearn to use when talking about the Rockies. And I’d definitely stop at the last coffee shop in Colorado.

But there’s really nothing to compare with the freedom of a cross-country drive. I learned priceless things about myself in isolation, and gained a new appreciation for this amazing country of mine, from its heart-rending beauty to its quirky, creepy, and ultimately very lovely people.

I didn't write about the road, other than what I've chronicled here. But the words and ideas that took form as I barreled across the country at 75 mph couldn't have come without the solitude and reflection imposed by a long drive. In the absence of home, friends, responsibility, and family, all I had was myself, and my words.

And as writers, isn't that all we really need? Writing isn't just sitting at a desk, pounding away at a keyboard. It can happen anywhere; writing is not the act of physically placing words on a page, but the state of mind that allows us to create stories, worlds, people from nothing.

Screw Amtrak and their terms. Hop in the car for a day or twelve. Eschew wi-fi. Find yourself, then dig a little deeper for that place that makes you write, and squeeze it for all it’s worth. Just make sure you have enough coffee.

7 Tips For Your Summer Road Trip From Jack Kerouac

Why Even Ayn Rand Can Teach You Something About Writing

Binge: My Love/Hate Relationship with NaNoWriMo

The only real downside to twitter is the idiots that distribute uneeded writing advice without it being asked for, without any real regard to figuring out whether your published, or have been writing longer than they have. I mute those suckers, and use a private account I tightly control who follows me.

Plus most of the advice is something that isn't even a grammar manual like "don't start with dialogue" or don't use a one sentence hook in your short story or novel.