This is my PSA. My chance to give back to other writers.

[Imagine me narrating this to you while I’m in some kind of mountainous meadow. I’m in a jean jacket for sure. Jean pants, commonly referred to as “jeans.” My hair looks great. And there’s something wise about my face. It's a dark wisdom. I've seen...things.]

But there’s a dark side to all this progress. An underbelly. A dark, brown (and sometimes even a little red) underbelly.

There's always that motivating feeling after you get over being sick where you think, "Man, I could write more. When I feel good, I could totally write more."

What Is A Hemorrhoid?

[We pick up the PSA scene in some kind of barn. I'm wearing a blacksmith apron, hammering a hot piece of metal.]

If you’ve never had a hemi, count your lucky stars.

If you think you might have them, my advice is to do internet research, become more and more certain that you’re dying of some kind of butt-related cancer, panic for a week or so, and then come back around to a more likely conclusion.

If you discover for sure that you're afflicted, take my advice, don’t complain to my mom about it. Because, in my experience, she’ll just say “Yeah, well I never had one before I was pregnant with you, so tough.”

What's it feel like? Well... it feels like there's something sort of sticking out of my butt, to be frank. And it kind of always feels like I have to take a dump. And the wiping, my god the wiping. It doesn't end.

What Does Writing Have to Do With This?

[At this point in the PSA, I’m carrying a hay bale. For what, who knows? I’m just lifting it, carrying it about ten feet, and then setting it down on top of some other hay bales. And now I'm taking off my gloves and leaning on the stacked bales. Now we're really going to talk.]

You see, I started writing a lot more, and therefore some other things about my lifestyle changed. And those changes had an awful lot of crossover with the things that go hand-in-butt with hemorrhoids. It's not like putting pen to paper caused my problems. But the connection is undeniable. Let's have a look.

Lack of Exercise: I’ve been a runner for the last 15 years, but that whole fitness thing has taken a dip with the increase in computer time. Getting exercise is a great way to prevent hemorrhoids, it turns out.

Chronic Diarrhea: This might be self-imposed. Coffee fuels the writing. And I drink an amount of coffee appropriate for a couple who works swing shift in the 1920’s, before we knew that water was something that people needed to live. I made my own bed on this one. Then I crapped in it.

Sitting for Long Periods Of Time On The Toilet: This might not sound writing-related, but hear me out. I made a dumb Twitter pact: Only Tweet on the toilet. That way, I’m not wasting good, productive writing time on social media. The problem is that sometimes it takes me a while to come up with a brilliant joke like this: 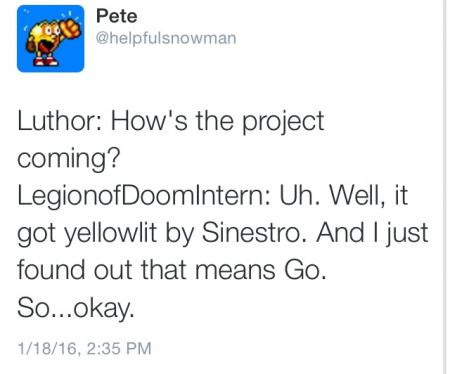 I need to be able to sit and type.

I'm not someone who needs absolute silence and full concentration, but an itchy asshole is something that I can't really ignore, no matter how absorbing the work might be.

It was hard to sleep.

It's hard to be intimate with your partner. By the way, this really sums me up. Coy about "being intimate" in the middle of a column that's all about my butthole.

Deeper In The Rabbit Hole

[Now I'm brushing a horse. I'm hiding my terror because I don't know anything about horses and no one told me that this PSA thing involved brushing a horse. Do I brush the long hair on its neck? Or like..it's whole body?]

There are two sections of the store I never paid much attention to before I needed them.

One was the wacky dental stuff. Go to your grocery store, I guarantee you there's an aisle of dental hygiene products that'll leave you shaking your head, thinking "What poor bastard needs this stuff?"

This poor bastard. I know, from experience, that they sell a tiny plastic barrel of putty for making your own temporary fillings. Dentists, my hat is off to you. Fillings are hard to do right.

The other previously-ignored aisle of the store, for me, was the butt stuff.

Let’s break it down.

Adult Diapers: Thank goodness, not yet. If I ever go this way, I’ll probably just explain to the checkout clerk that I’m like that astronaut nutt-o, and I’m driving cross-country to kill my ex-husband. That seems less humiliating.

Laxatives: I’ve never had need of these products. One time my father advised that if you ever were in need of unblocking yourself, just buy a whole head of lettuce, wash it, and eat it. I don’t know if that works. My dad was a doctor, but he's currently an imprisoned felon, so take that for what it's worth.

"What poor bastard needs this stuff?"

Antidiarrheals, aka De-Laxatives: This seems like a dangerous game. Balancing laxatives with de-laxatives. There's a lot of chemistry going on here, and chemistry is the first high school class I nearly failed.

Medicated Wipes: Because when you’ve got a problem, toilet paper feels like wiping your ass with a corn cob made of sandpaper. Those bears that are always crapping in the woods and using Charmin? Those dudes are my sworn enemies now. They're dirty liars, and they could at least try and wait until night time.

Creams: The step up from wipes. For relief of swelling and symptoms. I don't have much to say about this other than the fact that any time medicine is applied to your butt, it will be cold.

What Worked For Me

[Now I'm done brushing a horse, and I'm mending a fence. It's nearly dusk. Very cheap CG lightning bugs are all around me.]

Let's do this first, suppositories.

If you’ve ever questioned the use of suppositories, if you’re one of those hardasses who’s like “I’d rather just be sick than put something in my ass”, get over yourself. Take it from experience, the human butthole is not too precious to act as a port for self-administered medicine. Because from where I was standing (leaned forward on the bathroom sink) there were much worse things than putting a greasy bullet up your ass. And those much worse things were the ailments that caused me to put a greasy bullet up my ass.

If you ever have to use these, I have just a little bit of advice. Don't look in the mirror, it's weird, and if you're not familiar with objects knocking on the back door, a suppository goes up A LOT further than you think.

Second, back to the exercise. No secret there.

Third, my god Metamucil. I’m officially shopping in the old people section of the store, and I don't care. I'll toast you with Metamucil next New Year's. If you don't believe in my statement that this Metamucil is a wonder drug, then read the Amazon Reviews.

[Me, standing with a family that's clearly not mine. They're all way too attractive, but they're good actors and I point out lightning bugs to the kids before I turn and start talking to the camera.]

I like to take something positive from these experiences.

I'm okay now, which is a plus. Health is always nice.

There's always something to be said for atypical experience. That's one.

There's always that motivating feeling after you get over being sick where you think, "Man, I could write more. When I feel good, I could totally write more."

But more than that, the experience of purchasing and applying suppositories and Metamucil regularly is humbling. When your ass doesn't work, it's pretty humbling. I wish I had a better word for it, but I don't. You walk through life, and no matter what happens, no matter how right you are in a situation or how enraging another person might be, no matter how sure you are that someone in your workshop is an idiot jerk, you flash back to yourself in front of the mirror, (this is why I told you not to look!) pressing a greasy little bullet deep into your ass, washing your hands, and preparing an orange powder drink meant for seniors.

Author's Note: I'm not a doctor. If you're having these problems, you should probably see one. Maybe five.

Exercises All Writers Need To Do

Joshua Chaplinsky from New York is reading a lot more during the quarantine January 26, 2016 - 12:09pm

You are the bravest of writers, my friend.

Community Manager
helpfulsnowman from Colorado is reading But What If We're Wrong? by Chuck Klosterman February 28, 2016 - 8:23pm

I feel brave. For once in my life, I feel like a hero.