The runaway success of John Green’s The Fault in Our Stars, a tale of teenage love and terminal illness, got me thinking about novels that use disease as the focal point. It’s odd that there aren’t more of them, given the intense melodrama inherent to sickness. One’s world changes drastically when a fatal disease enters the picture, whether you’re the scared patient or the nervous friend or the grasping relative. There’s a natural arc to the drama: you’re fine, you’re sick, you die. If you’re prone to theatricality, you might rally just before the scythe of death cuts you down. And everybody is weeping, weeping, weeping.

So here are five disease novels, listed in no particular order. 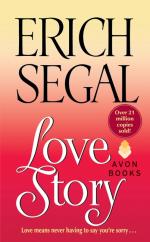 It’s easily mocked, this one. A Harvard jock falls in love with a working class Radcliffe music major, who ruins everything by developing incurable leukemia. She goes fast once she’s diagnosed, but there’s more than enough time to wallow through a subplot involving the preppy Oliver’s vast family fortune, which makes Jennifer’s demise all the more tragic. She never gets any of the dough!

The author of this snifflefest is Erich Segal, a professor of Greek and Latin literature at Harvard, Princeton, and Yale. Segal’s academic pedigree really ought to have stifled the tearjerking, or at least made it less stomach-turning. But the fact that it was written by an egghead didn’t adversely affect the novel’s commercial appeal at all. Millions of copies were sold, along with a lot of Kleenex. An odd piece of background is that Segal based Oliver in part on Tommy Lee Jones, though Al Gore claims that he’s the inspiration. (Jones and Gore were Harvard roomies.) Today, Love Story may be best known as the source for one of the most grotesque perversions of real human emotion in all literature: “Love means never having to say you’re sorry.” No, no, no! In real life, love means having to say you’re sorry at least five times a day. I’m sorry, but it’s true. 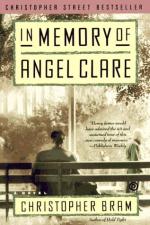 'In Memory of Angel Clare' by Christopher Bram

Christopher Bram’s much more sophisticated disease melodrama is a product of the AIDS epidemic; when the book came out in 1989, there were still no truly effective treatments for the disease, and in urban areas everybody knew at least one person who had already died.

Bram always cares deeply about his characters. Not wanting to produce a standard novel in which some poor soul has to get a dreaded disease in order to further the plot, Bram more sympathetically centers his novel on Clarence’s survivors, those who knew him and fondly nicknamed him Angel Clare. The original literary Angel Clare is one of the protagonists of Thomas Hardy’s Tess of the d’Urbervilles; Bram makes his character all but literally an angel – he’s dead when the novel opens. And his coterie of survivors spends the novel both remembering their late friend and embarking on the difficult journey of picking themselves up and going on with their lives. Bram is one of the most astute creators of psychologically complex characters in contemporary American letters. He’s way underappreciated. 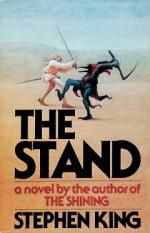 'The Stand' by Stephen King

If memory serves, I picked up The Stand after reading a number of LitReactor reader and contributor recommendations. I’d never read any Stephen King before, mainly because I thought his books were too damn long. So I was skeptical but still open to appreciating King’s place in American literature. I was blown away. It wasn’t so much a matter of luscious prose; King’s style is pretty ordinary. It wasn’t the story — at least not entirely; King tells a good tale, but it’s not that good. It wasn’t the characters, most of whom don’t grow much during the novel. It was, instead, the hauntingly thorough nature of the book, the creation of a believable apocalypse built on an extraordinary foundation of credible details. A disease agent is created in a lab. It gets loose. The world essentially falls apart. But there’s salvation at the end.

It has been a few years since I read The Stand, but I can’t go through the Holland Tunnel without being nauseated by King’s description of two characters climbing over stalled cars and decomposing corpses in the dark. I can’t eat friend chicken without thinking of the old woman to whom the good folks gravitate, and the wolves’ creepy eyes watching her pass down the road by foot. I wasn’t especially impressed by “the Hardcase,” who’s basically a cardboard devil. But I will never forget the horrifying but touching image of a daughter digging a grave for her father when only one other person is alive to notice. I still contend that King would be a better writer if he didn’t tend to produce four words when one or two would suffice. But as far as disease novels go, they don’t get much better than this. 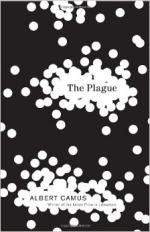 'The Plague' by Albert Camus

Camus was not an existentialist, despite the widespread belief that he was. He was, instead, an absurdist — his literary world makes sense only insofar as it illustrates suffering, anarchy, and the search for meaning in a world that resists reason. In The Plague (la Peste en français), the Algerian town of Oran suffers an outbreak of the bubonic plague, a particularly nasty disease that attacks the lymph nodes and causes continuous vomiting of blood. It’s spread by rats, which in itself testifies to the plague’s hideous and disgusting nature.  Rat corpses begin turning up in increasingly large numbers. Hysteria ensues among the populace, but the authorities respond by issuing cheery notices that nothing is really amiss. All too soon, Oran is quarantined, communication with the outside world is severely restricted, and death is everywhere. A priest convinces the gullible that it’s all God’s work — punishment for their lack of piety. Dr. Rieux, an atheist who turns out to be the novel’s narrator, treats as many patients as he can, but his enormous effort doesn’t make much of a difference. People keep dying. The Plague does not have a happy ending. 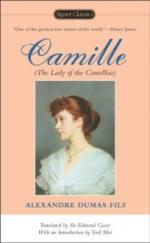 'Camille: The Lady of the Camelias' by Alexandre Dumas

Alexandre Dumas’ 1852 novel, La dame aux Camélias, is best known for two works it inspired — a classic opera, Giuseppe Verdi’s La Traviata — and the Hollywood Golden Age movie Camille, starring Greta Garbo and directed by George Cukor. The novel is a lot like Love Story, only instead of a Harvard jock falling in love with a scholarship girl, it’s a bourgeois weakling who’s smitten with a — what is the word? — ah yes: whore. She’s a class act, this whore. When my parents took me to see the 1968 movie adaptation of La Traviata, I asked my mother, “Why do those men give that lady all those presents?” Without missing a beat, my mother answered, “Because she’s very friendly.” Indeed! The French don’t call the heroine a whore; no, she’s a much more elegant courtisane. But the game’s the same: she fucks for money and gifts.

Enter Armande, the goofball who falls in love with her. His father is appalled, and he convinces the whore to end the relationship. She then develops tuberculosis or pleurisy or consumption or one of the other popular diseases of the 19th century and croaks, miserable and alone. Like the endings of many disease novels, it’s a pleasure to see her die. It’s the highlight of the book. Death! What fun!

Did I miss any? What is your favorite novel about disease?

You missed the most relevant story to current events. Richard Preston's The Hot Zone is based on the true story of the Ebola virus in Africa and it's cousin the Reston virus in America. If you'd prefer something more fictional, Preston also wrote The Cobra Event, which is about bioterrorism using an engineered virus. They are both excellent reads and I would definitely recommend both of them.

Yeah, absolutely agreed, Hot Zone is one of the scariest books written.  Matter of fact style but incredibly detailed, gory prose.  Ebola is number one on my list of things I do not want to die from.

It's probably not very well-known, but "Sector C" by Phoenix Sullivan is another excellent book. It's pretty well fictional, involving genetic engineering the way it does. Solid story with pretty good characters. Going to go find Hot Zone and Cobra Event now; thanks for the recommendations.

Hot Zone was a great read! I enjoyed The Stand when I was first introduced to it, but in an attempt to give it a second read I found that it wasn't as enjoyable the second time around.

edsikov from New York by way of Natrona Hts PA is reading absolutely nothing August 12, 2014 - 5:32am

Hot Zone certainly sounds like a great end-of-summer beach read! Thanks for all the recs!

I can only imagine how many copies of Hot Zone are selling now.  I work at a hospital and we are discussing screening patients for Ebola symptoms. No shit.

Your writing skills are really good.I read the "Love story" novel and I shared it with my https://stdcenterny.com/ureaplasma-testing-treatment-prevention-nyc team members as well.I have become a fan of your good posts. Whenever I visit your page, I find something extraordinary to see here that proves helpful for me.I urge you to keep sharing more. Thank you so much for this.