An Interview with Peter Clines: NYT Bestselling Author of The Threshold Series

Interview by Autumn Christian February 6, 2020
In:

Peter Clines is the NYT Bestselling author of such books as Paradox Bound, 14, Dead Moon, and the Ex Heroes series. This week he released the latest in the Threshold series through Audible, a book called Terminus. I sat down with him to discuss among other things, the book itself, which literary figure would win in a fist fight, and Peter's favorite dystopia. You'll also learn the truth about crows. The one you've been waiting for.

And when I say 'sat down and discussed,' I mean I've been hiding in the crawlspace beneath his house for the last 84 days, subsisting on Cheetos and whiskey and occasionally sneaking out to recharge my phone or annoy him if he changes his WiFi password. Finally after much scratching and knocking around at night, and occasionally shitposting on Twitter, he agreed to this interview.

"Terminus" is the latest book in the Threshold series. Many of your books can't really be described without giving some key mystery away. But the cover of "Terminus" clearly shows a giant tentacle reaching down out of the sky. Does that mean tentacles are forthcoming, and what else, if anything, can you tell us about the book?

There are SO many tentacles coming down out of the sky. Countless tentacles.

So, yeah, it’s a Threshold book, which means its another one in this sort of “unconnected series” as I’ve come to call it. This one focuses a lot more on the Family, a group who’ve been a lurking threat in a couple of my novels. One of the pivotal characters in Terminus is a woman named Anne, a Family member who was in two of the previous books. She was supposed to have a much bigger part in 14, and now she finally gets to step into the spotlight.. And a guy named Chase who’s traveling the world, sort of avoiding something  and trying to figure out his life. There’s also Anne’s high school boyfriend, Murdoch, who’s sort of found himself back in her circle again and is kinda having, well, actually he’s well past his crisis of faith and just figuring out how to deal with the rest of his Family. It’s a theme I keep coming back to—trying to find your purpose and where you belong. I think it’s something lots of people can relate to, because it’s something most of us deal with at some point in our lives

I always think of your books like puzzle boxes. I'm unsure of where each piece goes, but in the end, they all are critical to unlocking and solving the puzzle. Can you describe your process in plotting out and writing a book that involves a big mystery?

I think the best mysteries are the ones that are really simple in retrospect. They don’t depend on layers of concealment or impossible-to-make connections or information the reader never gets access to. It’s our own—and the characters’ own—assumptions that make things seem confusing or mysterious at first, but when we get to the end we realize that, once we know the answer, everything makes sense.

I try to have my “big” mystery solved and ready to go before I start, but once I have that, while I’m writing, I’ll find other things I can layer into that to add to the mystery and make it more complex. This works really well with my writing method, too, where my first drafts are very much a “just get it down” thing and the later drafts are a lot of cleaning and polishing and refining.

What's the story behind Saturday Geekery?

It’s a two-fold thing. One part is that it’s my day off. Unless I’m super-close to a deadline, I make a point of always taking one day off a week and doing something as non-writerly as possible. Because I’m a geek, that usually means building little toy soldiers. Or LEGO sets. Sometimes Gundams. I have a couple geeky hobbies.

The other half is what most people know it as—while I’m geeking away I usually put on a B-movie or two in the background. And at some point I just started live-critiquing them on Twitter. I have huge respect for anyone who actually gets off their ass and makes a movie, and I have a ton of friends who work in the industry, but at the same time it’s kinda frustrating to see some of the really obvious mistakes folks make when it comes to filmmaking or storytelling in general. My sensitivity for this was probably sharpened during a couple years as a starving writer when I was reading scripts for screenplay contests.

Anyway, I started doing the live critiques on a regular basis and people seemed to like it. So now I watch three or four B movies pretty much every Saturday. And usually end up drinking a lot to get through them (which just makes it more entertaining, so I’m told).

You occasionally get suckered into hosting a writer's meeting called The Writer's Coffeehouse. Is there anything important you've taken away from this group, or should we all just stay home and never try?

Occasionally for four years now, yeah. I actually get a lot from it. The Writers Coffeehouse grew out of the Liars Club, And Jonathan Maberry (who runs the San Diego Coffeehouse) encouraged me to start one in Los Angeles, at Dark Delicacies. It’s a free, very informal meeting of writers—all levels of writers—to talk about writing. The art side of it and the business side of it. It’s not a big networking event, it’s not a critique group, we just talk about writing. And the joy of the art side of that is that there are lots of different ways to do this. They won’t all work for everybody, but there’s always some new ideas to talk about. 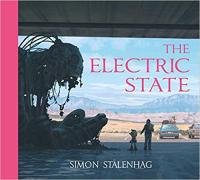 I heard you were a part of a dystopian book club. Can you describe your favorite dystopia?

Yeah, I also run the dystopian book club at the Last Bookstore in downtown LA. Favorite dystopia? Like, which one would I like to be in...? Tough call. I’ve noticed, after reading a lot of these, that dystopias seem to fall into one of two categories. There are the stories where the people within that world recognize they’re in a dystopia, that there are things horribly wrong with their world. Then there are the ones where we the readers know the characters live in a dystopian world, but they’re all kinda okay with it. Figure something like Brave New World shows a world that has a ton of issues, but even most of our “heroes” are just vaguely dissatisfied with it. The angriest guy, John the Savage, is mostly angry at himself for wanting to be part of it. “I am a sinner for wanting to have no-consequences sex with this woman I share a mutual attraction with! Shame on me. The sin! The sin!”

I don’t know if that makes it a favorite, but we talked about it a lot. The Electric State was another one we all liked and talked about a lot.

If you had to pick one of your books' universes in which to live in, why is it Paradox Bound? (Okay, I will be surprised if it isn't Paradox Bound).

Easily Paradox Bound. I’m friggin’ crazy proud of Terminus and the other Threshold books, and the Ex-Heroes series, but Paradox Bound is probably my most positive bit of worldbuilding. No zombie hordes, no evil cosmic entities, it’s just a road trip through American history. And it’s another book about finding where you belong. Because I’m a hack who keeps falling back on the same themes.

Okay, now for a very important literary question. Who would win in a fight: Howard Lovecraft or Edgar Allan Poe?

Oh, jeez. Poe, hands down. We all think of him as the sickly guy and forget he went to West Point and was an artillery sergeant in the Army. I’ve always gotten the vibe Lovecraft was an early internet troll—very loud and bold on paper, very meek in real life.

Where can I get Terminus, and after I'm finished reading it, where can I file any complaint letters I may have?

Terminus is an Audible exclusive, so you can get the audiobook there, either to buy or for a credit. If you have complaints, scream them at any crow you see and it will 100% carry them to me, rest assured of that. If you happen to enjoy it, you can leave a review in any of the usual places, or tell me on Twitter or Instagram—I’m @PeterClines on both sites.

Final question. Can I come out of the crawlspace now? I'm almost out of whiskey and puffy Cheetos and I need to restock.

No. That’s what the vent’s for.

An Interview with Chris Beckett about Science Fiction, Outsiderhood, and His New Novel 'Daughter of Eden'

That Buzz: Marc Sheinbaum on his debut novel, "Memories Live Here" (and much, much more)