Interview by Joshua Chaplinsky July 6, 2020
In:

If you enjoy the type of non-traditional fiction Blake Butler produces, I'm assuming you are already aware of his existence. If you enjoy but are not yet aware, you are in for a treat. Maddeningly surreal at the level of the sentence, Blake's work reveals itself from afar, coming alive when taken as a whole. His manipulation of language is a thing of wonder, and the emotions it inspires are more akin to what a person feels while listening to an intricate piece of music as opposed to reading a book.

Experimental writing is a honey trap for some, but is more likely to send the average reader screaming. Yet somehow, Blake has made a career of it. He was kind enough to answer some questions about his unique place in publishing and his latest novel, the heart-breaking and heady, Alice Knott.

Despite writing challenging, "experimental" novels, you somehow manage to get published by the bigger houses. How did you come to find yourself in this unique position? Are you truly as unrestricted as it appears to the outsider? Is there ever any creative conflict behind the scenes?

I’m very lucky to have found an editor, Cal Morgan, who gets what I do and trusts where I go with it. Honestly, I would have never expected the kind of stuff I do to end up where it has, and every time it does it is taken as a blessing. Cal has an uncanny ability to read between the lines and know where and when to ask questions and trace out oblique arcs, in a way that had always made me feel I both have total access to possibility and that what I dream up will be accounted for. It’s a live dream. Not everything I write is destined for that space, though, and I like to keep in mind now when I am writing something I believe I’ll send to Cal as opposed to other work that might be more appropriate written out in lard grease on a black wall, or rotting forever on my hard drive. All texts have different purposes.

Seeing how your novels are non-traditional, would it be safe to assume their conception is as well? How do you know when an idea is ready to become a novel? 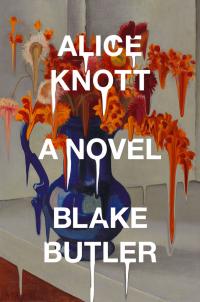 I never tend to know when anything is going to be anything until I’m over my head in it. I like to write from my gut and my unconscious and let my rational brain parse and sort it as it comes, which often tends to put me in places where I have to trust the process more than any defining marker, at least until the shape has begun to be revealed. I like to dive in and let the ideas fly live and see what happens rather than trying to steer a ghost ship by planning what will happen before it does. Often this means I end up writing and revising a lot more than I would if I tried to be more concrete in my direction, but I love revising, I think more than drafting at this point, so I’m in for the long game and willing to throw away or keep to myself what doesn’t begin to reveal itself from within the magic.

What draws you to this type of material? Did young Blake want to write children's books? Is there an alternate universe where Blake Butler is the highly successful author of a series of vampire novels?

I hear a lot of writers say they’d sell out if they could, and I have never understood that. I just want to make weird shit the way I want it. Life’s too short to chase what others want. I have no idea why I started doing it, honestly, besides that I’ve always been a reader first; the writing just started pouring out of me and I haven’t been able since to make it stop. I’d write some vampire novels if kids would like to read a puke stream of metaphysical dysmorphia, dream terror, and post-cellular damage.

Do you do any sort of outlining or planning before writing a novel? Or do you just follow where it leads? Is any aspect of your process "normal"?

It’s normal in that I sit down every day if possible at the desk for 2-6 hours and write. That’s really all it takes if you’re willing to be honest with yourself about your intent and its application. Writing is really just pressing a bunch of buttons, in the end; I try to get out of my own way as much as possible and let the absence in me speak. I don’t like to plan in the way of outlining more than fragments of ideas or larger strokes, if that, though I do tend to have a problem turning my brain off when I’m deep in it night to night. Your unconscious will do a lot of work if you let it and stay in the cut. I am almost always in the cut.

You once told Roxane Gay in an interview for The Rumpus, " I don’t really think about digital books. I don’t care what they look like. I hope the e-book of [There Is No Year] is a jpg of my dad and a bunch of machine code. You can’t preserve a reading experience for a machine nor should you try."

Have your feelings changed over the years? Do you see potential for experimentation in the digital format, or do you still prefer to do you experimenting within the confines of the printed novel?

They haven’t changed too much. I still don’t own an e-reader and can’t stand to stare at a machine too long that way; it feels like being strangled to me. I do fantasize a lot about a sort of text that is much larger than print and text, and I am surprised there hasn’t already been more innovation with the form a book can take. That starts with deconstructing the idea of what a novel even is, which would be nice to see completely overhauled in as many minds as we can make to think of what a book might be at all.

So much seems to have changed in the world and, presumably, your personal life since you finished writing Alice Knott. What drove its creation? Is it a product of a point in time? How does it relate to the now?

Exhaustion with American culture and a desire for something more will never die.