Blake Crouch knows that reality is horror. He’s built his career writing realistic storylines about ordinary people thrown into terrifying situations. But these situations aren’t far-flung visions of a distant future. They’re grounded in actual science that’s happening right now. We’re living in the future, which makes exploring the implications of technology and the advancement on the world at large more important than ever.

In his latest book, Upgrade, we meet Logan Ramsey, a scientist whose genome has been hacked. Becoming superhuman may seem like a dream come true, but maybe that dream is really a nightmare. By combining the science of genetic modification and the dark depths of the human psyche, Crouch has created a heart-pounding thriller that explores the essence of what actually makes us human.

We were thrilled to sit down and talk to Blake about his writing process and what goes into creating his action-packed plots while balancing complex scientific research.

Thanks so much for talking with us today! Can you introduce yourself and tell us when you started writing? Were you an early creative or did that develop over time?

I’m Blake Crouch, and I write emotional speculative fiction. I started early, around elementary school. I would write scary bedtime stories to tell my younger brother, and over time they kept getting more and more involved. My love of writing grew into poetry and short stories throughout middle school, and late in my senior year of high school I finally tried to write a novel. I finished my first year of college, and that was my first big step towards becoming an author. I queried it extensively, and even though it didn’t sell, it did actually help me get my first agent later on.

We’re sort of already living in the future. To me, I’m not writing science fiction. It’s just what’s happening now.

It seems like you gravitated towards the scarier side of fiction from the start, so writing thrillers feels like a natural fit. When did you decide to start adding science fiction elements to your stories?

I quickly realized that writing straight thrillers was really difficult, in that I found all the plot lines ultimately seemed to come down to elements like kidnapping and heisting. I wanted to add another element so that I could talk about something more with my readers. I started thinking about all the amazing breakthroughs happening in the field of genetics, physics, and medicine, and how those are all so fascinating, and I realized that’s what I really wanted to be talking about. We tend to think of science fiction as being in the future, but we’re sort of already living in the future. To me, I’m not writing science fiction. It’s just what’s happening now.

I often start with the science, then move to plot, and the characters are typically the last thing to come into focus for me. Once I decide what field of science I want to focus on, I do a lot of reading and researching. While I’m reading, I’m also journaling, and that can take months. As an example, I’m still taking notes and journaling for the book I started in December.

But it’s through journaling that I start seeing plot threads and characters emerge. From there, I develop an early outline, though that usually only takes me through the midpoint of the story, after that the plot gets pretty fuzzy. But if I can see what happens through the midpoint and have a notion of what happens later, I usually feel good enough to start actually writing.

The last third of a book is generally the hardest part for me. Even though my first crack at a story ends up pretty much being what the story will be, I really work over the back half of my books pretty extensively. I’m really hard on those third acts because I really want them to be surprising yet inevitable, and that takes a lot of work to find those story threads. It’s very easy to end a book in an okay way. But I work very hard to end a book in a way that makes people emotional and excited to tell everyone they know to read it. That’s always my goal.

That’s a lot of planning. Would you consider yourself more of a plotter? Or since you tend to go to the halfway point, are you more of a plantster?

Yeah, I like to do a little bit of planning and hopefully leave myself room for some surprises. I think being surprised by the book doing something I didn’t think it was going to do is often the most exciting part of the whole process.

For me, the science comes easier than the emotional arc. That’s always the hardest thing, so it’s usually the last piece that I get figured out. It takes a lot of nuance to create multiple characters thoughtfully. That’s not to say the science is easy, but building character is harder. With the science, I just have to put in the time. But with characters, I need inspiration and breakthroughs, so I give myself room to discover those.

I’m not one of those writers who writes every day no matter what. I write when something is compelling, so most of my books were written in short bursts of creativity. When that happens, I try to get up early and write 1,000 words a day, because I think that builds momentum. But I can be deep in a book and have to pull away to figure something out, or the science isn’t really gelling the way I hoped. I often go back to the drawing board, or read more on a subject, or reach out to subject matter experts for help. It's all kind of a messy process, honestly. 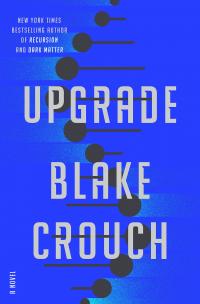 You do such an amazing job taking incredibly intricate science and drilling it down into concepts your readers can easily understand without taking away from the momentum of your plot, so it makes sense the process is pretty intense. You mentioned subject matter experts. How do they help you shape your books and how did you find them?

There’s an organization called the Science and Entertainment Exchange. They typically help with movies and TV shows, but I reached out to them a few years ago and asked if they wanted to help me with my books. And because they’re passionate about science being portrayed properly and excitingly in media, we started working together.

Specifically, I work with Clifford Johnson, who is the head of the physics department at USC, and Michael Wiles, who is a molecular geneticist. Clifford consulted with me on Dark Matter and Recursion, and Michael read through two drafts of Upgrade. He helped make sure I was writing about the concepts accurately, and he also gave me a lot of cool ideas for stuff I wasn’t even thinking about doing in terms of what the technology could do at its craziest extrapolation.

I literally would not be able to write the books to the level that I think I’ve written them without the help of these folks. I’m not a scientist and I didn’t major in any of the science fields in school, so I think I’m pretty dense when it comes to this stuff. It takes a lot of work to distill these really difficult concepts into core, bite-sized chunks that fit into a plot and character that an audience can understand. But I think that’s part of what my job is. It’s such in the weeds science, and these experts help give me the comfort that I’m not leading people down the wrong path or misrepresenting the core principles of the science.

That’s awesome. Before we wrap up, do you have any books or advice that you’d give to new or aspiring authors?

There’s a really good book by Stephen King called On Writing. It’s just phenomenal. In general, I don’t really believe in ‘how-to’ books. I think the best way to become a writer is to read a lot and then write a lot. You have to write through a bunch of garbage until you start finding the good stuff.

The other thing is reading. Expose yourself to as much good literature—and even bad literature—as possible. Then you can figure out what you like and what you don’t. From there you can find your voice.

I also think you should write the kind of books you want to read. That’s what I’m doing. My favorite genre to read is the kind of stuff I write, what I call emotional speculative fiction. I don’t think there’s a lot of those stories out there in the world, but it’s what I enjoy, so that’s what I write.

Get Upgrade at Bookshop or Amazon

Joma West: Writing Through the Dark

Alma Katsu: Highlighting the Personal in the Historical