Kelby Losack's Letting Out The Devils (Broken River Books) zooms in at the crossroads of a seedy neighborhood, where a young liquor store clerk sells various brands of cope behind bulletproof glass. With a wife and baby at home, he struggles for balance and boundary; the intimate allure of street urchins seem to challenge his own identity as a husband and father. Written in deceptively sparse chunks of backhanded see-all wisdom, Letting Out The Devils goes hard, yet maintains love as the driving force behind our most precarious moments.

Letting Out The Devils was one of the grittiest, yet somehow, most romantic books I've read in a while. At what point in our lives does this logically intertwine, when the disenfranchised on the fringes feel like the luckiest people out there? Is it easier to feel grateful when you have "less?"

I think it takes a romantic person to see the beauty in the struggle. You can be miserably destitute or miserably rich, that appreciation of life is a conscious decision. Or maybe a personality type, I'm not sure. Personally, I feel like my luck increases with each step up, but I see exactly what you mean. When you have to grind for every little bit, you're grateful for every minor victory, even if that's just making it another day. But the struggle in itself ain't romantic at all. Romanticizing is in an individual's ability to recognize the spirit of the moment. And maybe sometimes that's cope, but I don't really think so, I think it's good to look for beauty everywhere. If there's a natural romance in getting it out the mud, it's probably the presence of love. Like, if what propels someone through the struggle is their family, that's love. So I guess that'd be the crossroads of grit and romance.

Way I was living before I had this beautiful family of mine, I'd have been dead by now if it wasn't for them.

What does working at a liquor store do to a person? What is unique about the one depicted in the book? How intimate can it get behind bulletproof glass?

There's always going to be some level of intimacy between you and the person providing you the thing that'll take you outside of yourself for a bit. Doesn't mean it's always a kinship, but there's a sense of knowing there, right? Like, "Oh, it's a thirty-pack type of day. I feel you." The corner store in the book is basically any corner store around here — down in Gulf Coast Texas, I mean — off the main highway. Everybody needs gas or smokes or a tall boy or to try their luck at a scratch-off or some experimental drug to keep getting through the day at some point. It's a gravitational pull for all kinds of people, but everyone's going for the same reason, basically. There's a mutual understanding of the desire to satiate certain vices, or just get a little pick-me-up. I mean, it's a fill station, right? Even the ones with the broken pumps, or that don't even sell gas, you hit the corner store to keep the motor running in more ways than one. I imagine it gets tiresome to work at such a place, like it takes a lot out of you to interact with all that energy over the course of a shift, but it's a service similar to a clergyman. You're fulfilling the needs of hungry souls. The homies think I'm weird when I get going on about the vibes of corner stores, but shit, hang out around one for a while. Anywhere you can get liquor, knock-off speed, and some questionable beef jerky is the heart of a community.

Emery, the little girl in the book, adds balance to some of these stories, keeping it all from going off the rails into mere observations of depravity. Can a child save someone's life by merely existing?

Hundred percent. You take part in bringing a child into the world, now you've got a sense of purpose outside of yourself that's different from even, say, a soul mate or God or something. That kid's going to test your ability to stay grounded and balanced by needing you to be there, to stay alive. Every interaction with your own child is a confrontation with the essence of existence, 'cause they're pure and shit, and they came from you. I mean yeah, they're also a great big headache and source of anxiety, but that's also a part of that balance. Way I was living before I had this beautiful family of mine, I'd have been dead by now if it wasn't for them.

I've recently grappled with instances of trying to shoehorn real-life calamity into my fiction, only to find it often doesn't translate; how sometimes just because you have intense emotion attached to a memory, doesn't mean the reader will. Can you think of substantial moments you cut from the book for this same reason? 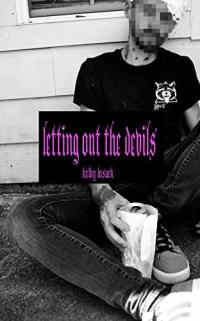 Nothing that went down ended up getting cut, but I was conscious of that potential mistranslation of emotion the entire time. I feel you a hundred percent on grappling with that. It's a tricky balancing act, like you want to be detached enough while writing to put it across in a way that the reader can feel intrinsically, with only the right details on the page — the more universally human parts that we all pick up on from like a gut level. 'Cause ourselves, the ones writing the shit, there's history behind why we have our own emotional attachment to whatever is being filtered from real-life experience into the fiction. But these characters don't have that history, and the reader won't either, so the key ingredient to making that hit like it should is the humanity of the situation, more than the personal attachment. I don't even know if that makes sense, but when writing this type of fiction full of masked diary entries, it is a big thing to wrestle with. I feel you on that. Not everyone can relate to caring for a teething child, for example, but I wanted to articulate and vent out my frustrations with that specifically, so I meditated on the process of cutting teeth, how my child is feeling and my own exhaustion and what does that mean for everybody to cut their teeth, what's that process look like beyond childhood, and that's where the rest of that chapter comes from — with Raymond experimenting with self-trepanation and the narrator finding new ways to make money — everybody's cutting their teeth in different ways.

When we think editing, we think first—sometimes only—of the omission of unnecessary words. But a big strength of LoTD is in the sequencing of these stories, and the timing of the lines. How important is this to your style?

Lowkey, I'm a failed musician who got hung up on literature. I just found writing to be the medium you can access anywhere at any time for free, so that's kind of been the instrument of choice, but I'm still trying to make music. The rhythm within the syntax and the aesthetic alignment on the page is a major part of the process. The arrangement of chapters or segments, the way I approach it, is like building a track list.

What about writers who try to "slum it" in their work compared to the real ones, who throw down lines you couldn't make up if you tried. What's the deadest giveaway for the former?

Deadest giveaway is how defensive they get over authenticity. Call out someone who's slumming it, or biting a real one's style, and they'll either gaslight or get really defensive or just go totally silent. But that's all outside of the writing, I mean, lived experience doesn't matter for what you want to write about. The content is just a vehicle for exploring ideas. And as far as biting style, if that's what you mean by slumming it, of course everyone takes elements from other people whose work they admire. But it's about the mixture, and if you're putting your soul into it, that vibe will be there. Steal from Palahniuk, you'll be a knock-off Palahniuk. But also steal from Herrera and Murakami and Ellroy and Ballard and whoever, I mean, it'll start to look like something unique, all blended up. I don't know. That compulsion to slum it, though, that's weird. Just be yourself and internalize whatever inspires you. Just be regular about it.

Get Letting Out the Devils at Amazon

Sunshine Noir: An Interview with Jeffery Hess, author of 'Tushhog'

In Conversation: Alex Segura and Joe Clifford on PI Fiction, Flawed Characters and Fighting Your Demons

Garth Miro: Burning Down The Idol of Vacations

Kim Vodicka: "I’m Only A Horror Writer Because My Life Is A Nightmare"

Max Thrax: "Noir Gets Itself In Trouble"