Manuel Marerro considers ExPat Press less of a publishing house and more of “a playground, a stateless ghetto” that's proven a magnet for outsiders, weirdos, and lifers who often take over his asylum. “We want to attract people cryptically, if that makes sense, because that’s how you get the most intellectually and otherwise diverse people, even if they don’t get along. The je ne sais quoi is like an inkblot beacon bringing people to us,” he says.

While he may downplay the structure, ExPat currently finds itself on the precipice of new wildfire growth as they up their own ante with the biggest brick in their wall yet, the 800+ page Fucked Up by nihilistic queer author Damien Ark, as well as the ExPat #4 anthology – their most chaotic collective testimony to date. Since steeping myself in the ExPat world, it's guided me to recall one of my favorite quotes of all time by Antonin Artaud: “If there is still one hellish, truly accursed thing in our time, it is our artistic dallying with forms, instead of being like victims burnt at the stake, signaling through the flames.”

What sets ExPat Press apart from any other publisher who claims to be transgressive, experimental, or generally pushing the envelope?

We do everything ourselves and we really care about literature. Without us, literature would be boring. No other publisher ranks, honestly.

One of the more exciting things I learned recently about ExPat is just how in-house everything is, especially you guys running your own printing press. Cover to cover the books are absolute works of art – nothing about it “looks” DIY. How labor intensive is this approach? Are there ever any moments of regret taking the hard road?

Without us, literature would be boring. No other publisher ranks, honestly.

We don't run the brick-and-mortar printing press we use, we're just well-acquainted with the family that does. I like the idea of everything hand-made. There's always imperfections no matter how you go about it, but the interesting thing is whether it's an authentically idiosyncratic attraction or something you couldn't quality-control because you weren't actually intimately involved in the process. I like to be able to go and talk to the workers and approve a proof, and feel like that aspect of your work is inbued with heartfelt and pure humanity, warts and all.

It's inspiring that ExPat is a successful press who refuses to deal with Amazon as a rule. Do you anticipate a day where you'd ever have to cave to them or would it negate a quality that makes ExPat books the jewels we seek out?

I'm holding out for my invitation to their Advantage program. If anyone wants to have their book on Amazon, they can and they can take the cut. We're fighting over every margin at Expat press, which is why we're an existential threat. They don't expect us to think like businessmen, but hobbyists. Most of the authors I work with are on the same page, they don't give a fuck about Amazon. We don't need them, and I think a lot of what is so-called prestigious melted away thankfully after the pandemic. I would hope.

There's a real attention to detail in the poetic exchange you give to your authors when you do copywriting for a new release or more frequently, the Twitter “poems” you write for when you announce a contributor's new piece on the website (ExPat has been publishing a piece daily since the pandemic hit). Is this done to help shatter what you've called “the HR managerialism of of corporate literary culture and academia?”

The only day we didn't run a piece since the pandemic was when Will Bernardara died. It's a cornucopia and we have serial contributors and people who seem to spiritually magnetize toward us, but I don't know if I can keep it going past 2020. We'll see. We're almost booked to the end of the year. The poems evolved from an idea I had with a former collaborator of juxtaposing their film stills with these sort of eerie radio dispatches. It became more stream of consciousness and I've yielded completely to the zeitgeisty schizo word salad at this point. It's getting tired, and I think I'll retire it soon. But yeah, I think it's a personal touch and people really appreciate this call and response dynamic. I dunno what I would replace it with. Other mags hype their pieces, I fluidly extemporize with a kind of poem. The managerial/consultant/donor class and academia have certain ideas about literature I think are just wacky. They use hashtags and represent a monoculture of surface-level chicken soup for the soul.

One thing I notice when I consider all the ExPat authors on my radar is the loud mold-breaking personality of each one. It feels akin to the Beats, Sci-Fi New Wave, or any documented, time-tested writing movement where there's the books, then there's the notorious element to the author themselves. Hell, one of your authors in in jail right now on the tail of her book release... Conversely, there's two authors who remain semi-anonymous with bibles and homeless as their respective monikers. Is this something you look for or is it something that's boosted once they've acclimated to ExPat energy?

I don't know what attracts misfits and deviants to us but it curates itself. I do think it's an energy that some people are on the level with. It has something to do with spontaneity and perhaps volatility. The reason I make art is to find the other. There can be no concessions to an imaginary audience if you're going to do that. Some might call this reader-hostile, but I think it's just honest. That's what people respond to, and if you respond to something we put out it's an authentic connection because yes, we're at the vanguard of bleeding edge borderline unprintable stuff.

People are going to have strong opinions about Fucked Up. It's as extreme as it gets. I've already been accused of peddling shock value. People can judge for themselves if it's a gauntlet worth enduring. It brandishes the kitchen sink on the first page and doesn't let up. Damien is every bit as serious as they claim to be.

You've mentioned that it's the curation that's paramount to the author stable of ExPat, and that it seems to “curate itself.” How does this work exactly?

A lot of alienated, marginalized people come to us. That's why it's like we're taking food off their plate. Big Literature/Academia and the click farms they prop up want people to be a certain way. We sort of share this space as a playground and invite you to be judged. People come back. I don't know that I even feel comfortable taking credit for Expat anymore. It's completely outgrown me. And good. 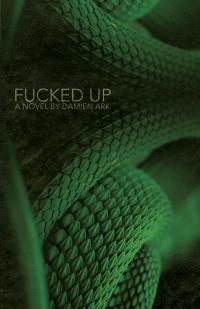 While many publishers are struggling with books sales in our collapsing economy, ExPat refuses to victimize themselves, instead making all your books available for free online as PDFs as a balance to selling physical copies. What was the thought process behind this strategy?

A cultural visibility campaign. A long term good faith investment. We hope people still buy our titles when we sell closer to cost. They speak for themselves and nobody else is putting them out. There's only one recent acquisition made by another press that's ever made me jealous. Everyone we've ever put in print was one of us. The only victims would be those that don't support us. They'll be depriving themselves of a cultural moment.

You've called ExPat an “unequivocally populist press,” which is fascinating when you consider both Donald Trump and Bernie Sanders – two bookends of opposite extremes – have been referred to as populist politicians. To confuse matters further, you've also called politics “nauseating.” What specific area in this wide common citizen spectrum does ExPat occupy?

I don't like politicians. I don't think any of them will save you or make your life better. As for governance and civic responsibility, I'm all for it. I worked on the Sanders campaign in 16 and was involved this time around as well. It's hard to act like Sanders did anything but fleece the working class, but I hope I'm wrong. That's just how demoralized the real Bernie Bros feel. I do identify with populism because it's for the people, by the people, and not corporate. Donald Trump is a figure I hope we can discuss objectively when he's in the rearview. He captured the hearts of so many ordinary Americans and is a phenomenon, say what you will about how bad he is. I don't see much hope in electoralism, and people are getting into theory and activism again, and things are getting decentralized and interesting.

One detail I've noticed in all the ExPat books I've read is that the authors seem to lean into injecting contemporary pop culture specifics – products, bands, current events –  into their prose. I always thought this was counter-intuitive when trying to build a timeless piece of writing, yet it seems to be building a real time capsule element with the press's output, like a writing movement perhaps should.

I see the merit in both perspectives. I have noticed our authors sometimes have good taste in pop culture. Some pop culture stuff is baked into the writing. It's just art in dialogue with other art, instead of in a vacuum. I'm sentimentally attached to books, so it makes sense that I'd be sentimentally attached to a song mentioned in them. It's written for any time and anyone, but the onus is on the reader, it must be, or it's not honest if I'm trying to be something to you, the reader. We're all here, interacting and it's all writing.

You're about to release ExPat #4, a collection of writing and art from your contributors and authors, and already I'm seeing a rather confrontational propaganda whisper campaign online. Should we be terrified or preparing to rejoice for what we're about to get?

Rejoice and be terrified, they share a contour, and get ready, this is the most ridiculous lineup of writers you'll ever see collected in one volume. All the work is outstanding, and all the weird energy you know us for is there.

In Defense Of Indie (It's Not What You Think)